Not long after I arrived in Melbourne, I read an article in The Age about two boys in their early 20s who started their own musical website. It wasn’t only the types of music they covered that made me visit that website daily; it was the professionalism with which they approached even the most unknown musicians. 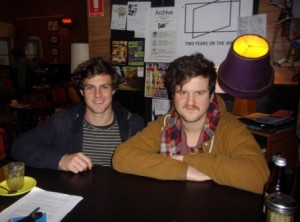 After a few months I decided to contact the founders of that website, The Ripe. After a  few Facebook messages we decided to meet and have a talk about their music community.

‘Our origins are the same since we started; find undiscovered and unsigned Melbourne artists and write about them alongside more popular things,’ Tom says as he sips his coffee on a cold morning in CBD.

‘We go to a lot of gigs, read other music blogs and try to approach musicians that we believe are worth a bit more recognition, as sometimes they are as good as international artists,’ Huw adds.

‘We definitely love the hunt, but it is not always easy,’ Tom says.

The first step to build that site was taken between drinks in a Brunswick pub. They decided to take the plunge and quit their jobs to focus solely The Ripe.

‘The website requires so much time for managing and organizing different things. The Ripe is our job, although we don’t earn any money from it,’ Tom adds.

‘Tom had a nine-to-five job in PR and I was a waiter parallel to my university studies. The Ripe demands a lot of work so instead of being slave to the wage, we followed our passion,’ confesses Huw.

The Ripe team is made up of other members too. Hailing from different suburbs of Melbourne with different backgrounds and personalities, they all share the same musical vision.

‘We’re like a family. We hang out together, talk about music and art in general. We all started from different harbours, going to different destinations, but we are now all in the same ship,’ Huw explains.

‘On the other hand, we all know it’s very hard to get a job into the music industry and there are many waiting in the queue. For them, getting an online portfolio means better chances to get into the system,’ Tom says.

The internet triggered irreversible changes in all arts, including music. Both Tom and Huw seemed to regard these changes as necessary for a more accessible and democratic music industry.

‘There are some negative effects, such as illegal downloading, but you can’t understate how revolutionary the internet has been for music,’ Huw says.

‘The internet revolutionised the way people discover music. It used to be a real problem for an artist to get a record deal and a contract. Record labels where always setting the agenda of what music the radio would broadcast. Now the music industry should follow the internet as everyone can find what they like and get it to the charts,’ he adds.

‘Artists can now find their audience online too. No matter what they play, they can reach the four corners of the world and get supporters,’ Tom says.

With the global financial crisis having a huge effect on all types of art, music needs to continue to bring people happiness.

‘I think in a crisis music is needed more than ever by the people. They need to find an exit and express their feelings,’ Tom says.

‘Despite what some might believe, I don’t think lyrics should be concentrated only in political issues. They must express every emotion that music can arouse in people,’ Huw argues.

In the end, both of the boys shared their relief about the rebirth of the Melbourne music scene after a period of lackluster interest and stagnation.

‘After that music turned to be a big money making vessel. It wasn’t so much about the music anymore but how many people could get into the doors and how much money they could make. I know that when you are in the business you have to make money to some extent, but as far as art is concerned, money can really destroy anyone’s talent, Huw adds.

Despite these concerns, the boys from The Ripe are hopeful for the future.

‘Fortunately now we see many people that want to see the music scene thrive and get back to what it was,’ Tom concludes.

No doubt the team at The Ripe will be there to cover the scene every step of the way.