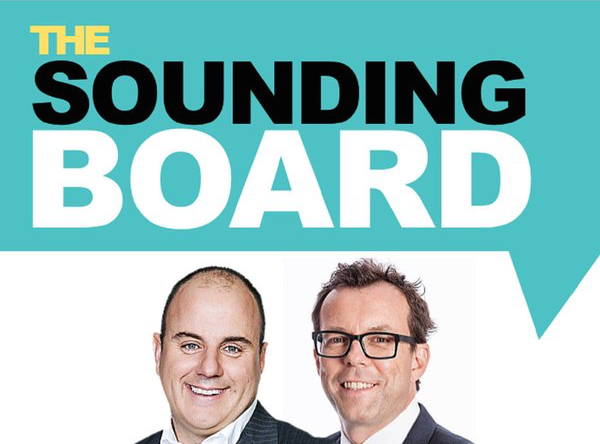 Ozzy Osbourne once thought the legendary rock mockumentary ‘Spinal Tap’ was real. When he learnt it wasn’t, he quipped “They seemed quite tame compared to what we got up to”.

Perhaps no one ever thought the same about Frontline, but many experienced colleagues have joked in passing the acclaimed Australian series once or twice verged on lifelike situations.

For perhaps that reason, the show found a second life in the last decade in high school Media and English classes.

While Damien Barrett and Craig Hutchison’s ‘The Sounding Board’ podcast is infinitely more serious and straightforward, it may arguably be just as important teaching journalism or communications going forward.

Barrett and Hutchison, CrocMedia’s partners in crime, have spent the last decade or so being maligned by football fans.

Whether this was a result of their perceived public demeanours or consumer’s natural derision of media personalities, there is no denying their reputations are divisive.

While their appearances on a range of different mediums are filled with the bluster of hard-nosed pundits, there’s a completely different side to them on offer here.

The show is more than just two old friends telling war stories. It’s a self-deprecating view of industry tactics and practice through the prism of their own personal journey.

Consider the segment Spin City, where Barrett and Hutchison play out and insert their bits of backgrounded information into a fictional conversation between two of footy’s movers and shakers. Its right out of left field and it works.

Their conversation in episode 8 is a perfect example of this, as they pretend to be Ross Lyon defending claims his side tanking from Andrew Dillion, head of the AFL’s integrity unit.

In-depth storytelling and investigative journalism condensed into role play. You can tell Barrett’s fictional inquisition is likely based upon hitting the phones and finding out what actually occurred, only taking some hypothetical liberties when expressing it.

Since the podcast still isn’t fully fleshed out, Hutchison and Barrett do find themselves in a weird lurch. Sometimes they’re stream of consciousness rambling without a filter, other times they search for the right words or stop abruptly because they’ve sailed into dangerous waters.

These aesthetics aside, the podcast touches heavily on communication and media theory. The first Spin City segment talks of the deployment of bad or controversial news on a busy day (things getting lost in the spin cycle) or dissecting PR game theory on how to feed certain info to mediums at different times.

They also dispense good information on how to build your own brand – Hutchison’s humorous story of how he (almost) sold Mark Howard’s media personality to advertisers is incredibly technical advice in profiting off your personality.

The confessional aspects of the podcast are also harrowing. Between admitting where they got stories wrong or conceding a figure intimidated them, it’s a rare offering of humility from an industry that prides itself on the appearance of perfection.

In the fourth episode, Hutchison speaks about how protecting an exclusive in 1999 cost him a previously close friendship with Gerard Whateley. He seems vaguely wistful but doesn’t hesitate to say he’d do the same thing again.

Similarly, Barrett winces when interrogated about why his friendship with Scott Clayton broke down over a series of stories in 1998. It’s like hearing the iron maiden finally being turned on the torturer.

Hutchison and Barrett are bold and unflappable in their other media ventures, but here they seem vulnerable.

The job does come with battle scars and their fortune comes with some regret and human cost.

Even if they’re just sports reporters and media businessman, they speak of navigating a profession that is designed to have inevitable confrontation and blood spilt.

This is a half-hour weekly portrayal of the things that don’t get taught in J-School – what happens when bridges get burned; how the truth can get you into trouble and just how to handle industry egos with kid gloves.

The Sounding Board is a fascinating walk through the media and PR business, even if you found the personalities involved previously off-putting. Hutchison and Barrett are at the peak of their powers here, insiders acting as fifth estate outsiders with a wink and a nod.