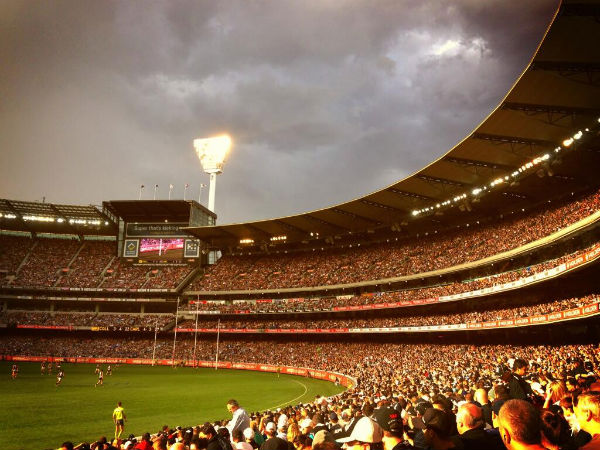 September in Melbourne has a unique air about it. The weather starts to get nicer, the people begin wearing less layers, and the smell of freshly cut grass starts to invade the senses.

On the sporting calendar, there’s no better month to follow football.

For fans of AFL, the feeling of meandering to the gates of the MCG on a spring afternoon is something unique. It’s different to the cold and wintery embrace of June or July.

There’s a seriousness, an uptightness, an edginess that comes and goes as the weekends pass leading up to the last Saturday in September.

The darkness that shrouds Melbourne in the colder months is gone, replaced by the bright colours of teams vying to lift that premiership cup.

Everyone becomes an armchair expert, as they try to explain why Buddy is no great loss to Hawthorn, as the stats say that the Hawks tend to play better without him.

Of course, people’s ear prick up. Those who had not a care for the regular season suddenly take interest, or at least know who the contenders are.

Families come together and friends get anxious knowing that if their team slips up, they’re left to wallow in mediocrity.

It may be tribal but there is an underlying soft-heartedness, one which might not be seen in other countries where rivalries coarse through the veins, and sometimes turn violent.

Fans of the teams who don’t make it swallow their pride and pledge their allegiances for the month. The media berates, picks, prods, snoops and worries. Everything kicks up a gear, but not just on the field.

Tickets become hot property overnight. Matches sell out fast, and those lucky enough to secure one are more than happy to tell those not as lucky. It is, after all, finals. Finishing second isn’t good enough if you’re the team competing or the fan refreshing Ticketek.

It’s the national anthem and the roar of the crowd as the words “advance Australia fair” are being blasted throughout the stadium.

It’s Eminem’s Lose Yourself and the ads on the big screen telling you to witness greatness. The noise is louder and the players go harder, it’s beautiful and worrying all at once.

A lapse in concentration is unforgivable, for in the finals, teams punish and get punished in a matter of seconds.

It’s September in Melbourne again, and the AFL finals are set to begin.

Matt Walsh is a second-year Bachelor of Journalism (Sport) student at La Trobe University. Follow his work on Twitter @MattWalshMedia.