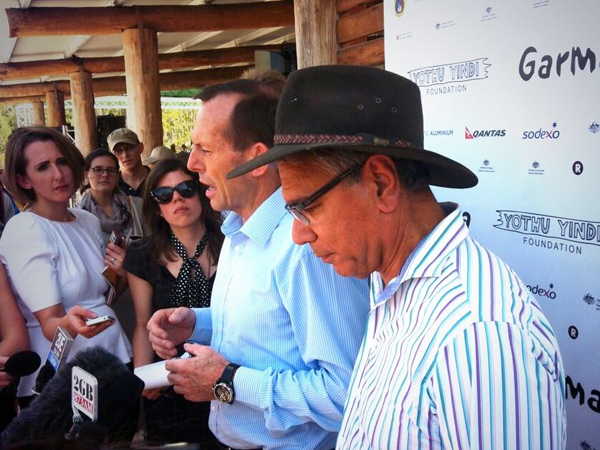 As the old adage goes, if you can’t beat ’em, join ’em – or in this case, recruit them.

This was the case on day six of the campaign, with Tony Abbott announcing the former Labor president Warren Mundine is now on his side when it comes to tackling indigenous affairs.

But it certainly wasn’t the case for the Labor camp, with Kevin Rudd being forced to dump Geoff Lake, the candidate for the safe Victorian seat of Hotham, after revelations in News Limited newspapers that he had abused a woman in a wheelchair 12 years ago. That’s three Labor candidates dumped in one week.

What the polls say

The Fairfax Media/Nielsen poll has the Coalition at 52 per cent to Labor’s 48 per cent on a two-party preferred basis.  Labor’s primary vote support is down two points since the last poll to 37 per cent while the Coalition’s primary support improved by two points to 46 per cent.  47 per cent of voters rate Opposition Leader Tony Abbott as more trust-worthy than Prime Minister Kevin Rudd, who scored a 40 per cent rating.  Mr Rudd had led Mr Abbott 45 per cent to 40 per cent on the same question in July, shortly after taking over from Julia Gillard.

More worryingly for the Greens however, is reports that voters seem to be turning away from there.

The Guardian’s Lenore Taylor looks at the real economic questions facing Australia in this great piece – and why no one’s quite talking about i.t

Tonight is fight night, my life goes on the line ! It's not too late to support the PCYC. http://t.co/3H4ddDeGz4

The Youtube video that the member for Hunter linked via his Twitter account today features a training montage to rival Stallone and a soundtrack to rival something that’s based on a novel by Dan Brown.

Fitzgibbon is readying himself for a fundraising Police Citizens Youth Club (PCYC) boxing bout with member for Cessnock, Clayton Barr. The credits declare the production was written, directed, cinematography-ed by Fitzgibbon. Impressive. Although, judging by the somewhat meek uppercuts he’s shown delivering to a suspended cow carcass, he may have his work cut out for him.

Note that the video conveniently cuts just before he actually downs the glass of egg yolk. But this slight disappointment doesn’t detract from the overall cinematic glory. Bring on fight night, good luck, Fitzy.

It must have hurt. Judge for yourself here.

Not the best media strategy in the world, Team Rudd.