Double dissolutions elections are designed to resolve deadlocks and flush out unmanageable senators - and are exceptionally rare, Cait Kelly explains. 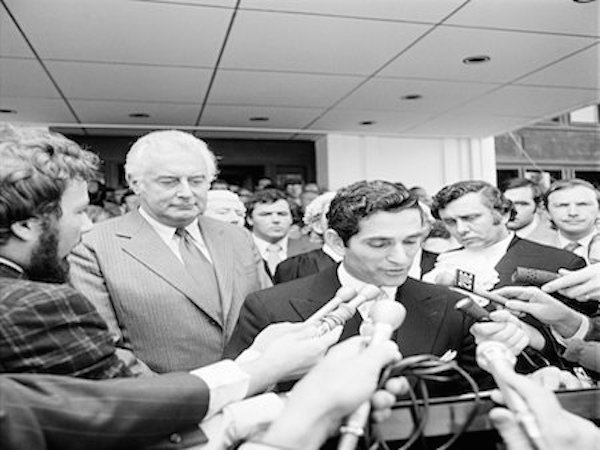 Last Monday, Prime Minister Malcolm Turnbull walked into the Prime Ministerial courtyard and laid down an ultimatum to the Senate – pass my bill, or we’re having a double dissolution.

But what is a double dissolution exactly? Well, it’s essentially an ugly break up.

A double dissolution is the only time every seat in the federal parliament goes to an election. After a Prime Minister has decided the Senate is unruly and won’t cooperate with the House of Representatives to pass legislation, the PM can use the process to file for divorce.

Once the senate has blocked a a piece of legislation twice – with three months elapsing between each failed vote – the bill becomes a potential double dissolution ‘trigger.’ The Prime Minister can then fire the gun, taking everybody to an election.

The bill being blocked is the Australian Building and Construction Commission (ABCC) Bill 2016, which Turnbull has given the senate one final chance to approve over three weeks from the 18th of April.

So what does this mean?

There are two main types of elections that occur. One is called a standard election, and it involves half of the senate and the entire lower house standing for re-election.

At a standard election senators are elected for six years, or twice the length of the term of a lower house representative. This is why only half of the senate stands at a time.

Standard elections are called in an election year from the 1st of July, when the terms of the relevant senators expire.

Phil Diak, Director of Media at the Australian Electoral Commission, explains that the second type of election involves dissolving both houses of parliament.

“Double dissolution elections are where the governor general issues a writ for the House of Representative for there to be an election on advice from the Prime Minister,” he tells upstart.

“In that event all 76 positions in the senate are subject to the double dissolution election.”

There have been six double dissolutions of the Australian parliament. The most notorious of these was the 1975 election, where the senate refused to pass supply bills. This led the to the downfall of the Whitlam government.

Out of the six double dissolutions Australia has had, the governing party has only lost the subsequent election once. This was the awkward affair in 1983 when the Liberal Prime Minister Malcolm Fraser called an election, thinking he would be facing Bill Hayden at the next election.

Unbeknownst to him, Labor had changed its leadership that morning, replacing Hayden with the formidable Bob Hawke.

What’s the ABBC Bill about?

Passing the ABCC bill would restore the Australian Building and Construction Commission, a building industry watchdog that was previously dismantled under the Gillard government. The Abbott government then re introduced the legislation into parliament after the Royal Commission into Trade Unions had finished.

The government argues that the ABCC will promote and monitor appropriate standards of conduct within the industry. Trade unions argue it will weaken their positions and influence.

So does this mean we’ll be having an industrial relations dominated election?

“Just because the ABCC bill was the trigger for the double dissolution does not necessarily mean it will figure largely in the election campaign. I’d suspect the Turnbull government would be reticent to get heavily involved in arguments about industrial relations,” Strating tells upstart.

“I think memories of the 2007 election will continue to haunt.”.

However, Strating argues that the potential of a double dissolution election shouldn’t be separated from the recent senate reforms.

“The double dissolution really needs to be interpreted with reference to the senate reforms. I think the senate reform was clever politics by both the Turnbull and Greens government insofar as it left Labor in the difficult position of defending a policy position that not all Labor parliamentarians support,” she says.

“The reforms are likely to consolidate the power of the 4 dominant parties (Labor, the Liberals, the Nationals and Greens) at the expense of some independents – [Nick] Xenophon will probably remain – and micro-parties, although we’ll have to wait and see what the election results are to see if the strategy worked.”

So what does all this mean for voters?

Because every senate seat is up for grabs in a double dissolution election, the quota of votes that each candidate needs to achieve to win a spot is much lower. This can make it much easier for independent or small party candidates to get in to the upper house.

However, thanks to voting reforms passed by the Coalition and the Greens earlier this month, it will be much harder for the small party candidates currently in the senate to be re-elected.

As far as filling out the ballot itself goes, Diak explains what’s in store for voters at the polls.

“With the passage of amendments to the Commonwealth Electoral Act last Friday [the 18th], it will ask voters to either mark the ballot paper above the line, in six squares minimum, or at least twelve boxes below the line with the senate ballot paper. Whether it’s a half senate or a double dissolution the instructions don’t change.”

Feature image supplied by the National Archives of Australia