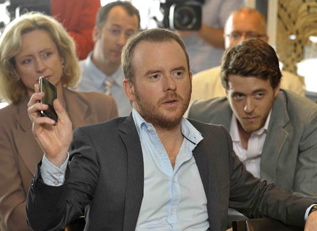 The Sunday Sun Entertainment Reporter and Lowdown Columnist Alex Burchill is no stranger to the trappings of tabloid journalism. In a colourful career, Alex has entered reality TV sets, (allegedly) assaulted an Australian Masters winner, helped out a high profile homosexual footballer, uncovered political sex scandals and even had an audience with God (who apparently looks like Geoffrey Rush). 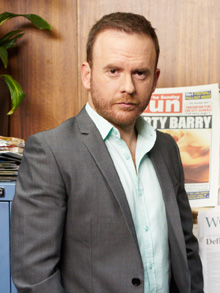 Times have been tough at The Sunday Sun with readership numbers tumbling like an Olympic gymnast. Alex and his editor have had to take some drastic measures to grab headlines; Alex’s ruthless pursuit of a story is inspiring. In this Working Journalist profile, he talks about his career and imparts valuable advice to emerging journalists.

Have you always wanted to be a journalist or was it something you fell into?

I’m chuffed that you thought I had options, Dan. It was journalism or jail.

You’re currently the entertainment reporter for The Sun, do you have any desire to pursue a more valid form of journalism?

‘Valid’ journalism is for people who write in awkward five line sentences.

You have dabbled in sports writing, working with footballers and notably an Australian Masters winner; is this a field that you’d like to explore?

No. I think sports men and women are heroes and shouldn’t be subject to the same amount of scrutiny as other celebs. If they happen to cheat on their spouses or prefer same sex partners, it’s their own business. Unless of course they fail on the field, then their immoral behavior becomes a matter of public interest.

Journalism is shrinking, what are some of the challenges a modern entertainment reporter faces in the current climate?

What would you say has been the single most defining moment of your career?

Interviewing George Clooney. He said he read my column. But after further discussion we worked out if was Julie Burchill’s column he read. But still, I feel we bonded.

What methods interview methods do you employ when speaking to a difficult subject?

You need to develop a good fake laugh. It’s the most important weapon in the journalist’s arsenal.

Stuart King from the Argus seems to be the man to catch in terms of a scoop. What have you learned from him?

How important is a headline to your work? Do you have some favorites?

There are the all time greats like, ELTON TAKES DAVID UP THE AISLE and OSAMA BIN WANKIN’. But I feel an opportunity was missed with the recent Kate Middleton topless pics. Don’t know why no-one went for DUCHESS OF NORK. Possibly because she’s actually the Duchess of Cambridge.

What are some of the pitfalls of journalism? Anything to watch out for?

Celebrities sleeping with your girlfriend is a trap for young players. I’m fortunate in that it’s only happened to me three times.

What key advice do you have for emerging journalists?

Make sure your recorder is switched on. Work with photographers who can cook. And for entertainment reporters, put your home address in the media directory, so if you get sacked, you’ll still get invitations to opening nights.

Alex Burchill bears a close resemblance to actor Adam Zwar and may only exist on Lowdown; 9.30 Thursdays, ABC1.

Dan Toomey is a staff writer and Master of Global Communications student. You can follow him on Twitter: @dan_tooms