The AFL Grand Final is considered the most important sporting event on the Australian calendar. The local media coverage is enormous, not to mention the prestigious accolades for the winning team and devastating heartbreak for the losers.

It has drawn an average audience of 2.85 million viewers around Australia over the last eight years, highlighting the tremendous public interest it draws on an annual basis.

Now multiply that viewership by around 40 and you’ve got the publicity of an NFL Super Bowl. And this year’s contest between two of the most fabled teams in the NFL in the Green Bay Packers and the Pittsburgh Steelers this Monday morning is set to be one of the most popular yet.

When you live outside of the American border, it’s extremely hard to fathom just how massive this annual event really is.

‘Super Bowl Sunday‘ is considered a genuine U.S. national holiday. There’s no doubt if the game landed on a weekday, the federal government would have no hesitation in declaring the occasion an official public holiday.

Here are some stats that might give you a little bit of perspective:

–        Last year’s Super Bowl between the New Orleans Saints and the Indianapolis Colts became the most watched program in American-television history, drawing an average audience of 106.5 million viewers, overtaking the final episode of M*A*S*H which aired back in 1983.

–        The European UEFA Champions League final was the only sporting event watched by more people than the Super Bowl last year with 109 million tuning in.

–        Advertisers pay as much as $3 million for a 30-second spot during a break in the Super Bowl, in fact a certain section of the audience tune in just to watch the commercials.

–        Under the NFL’s current agreement, each player receives a minimum extra payment of $88,000 if they are part of the winning Super Bowl team. Keep in mind though that star players and MVP’s might have millions more written into their contracts.

–        It is the second largest day for US food consumption after Thanksgiving Day.

Unlike the football codes in Australia, the NFL likes to showcase its most popular game in a different city every year. Therefore the match is usually played on a neutral venue, unless a team has made the Super Bowl in the same year they were scheduled to host it, hosting being something which has normally been decided years in advance.

This year’s Super Bowl will be played at Cowboys Stadium in Arlington, Texas, the home of the Dallas Cowboys. The arena is a luminous fortress that cost over a billion dollars to build. Sitting on top of the dome is a HD digital screen that stretches 49 metres wide and 22 metres high. 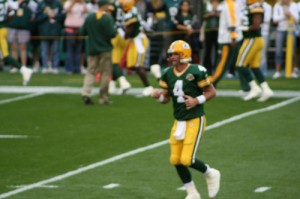 Green Bay is one of the oldest and most traditional football teams in the NFL. This game will mark the Packers’ fifth Super Bowl appearance, but their first one since 1998. They currently hold the record for the most overall NFL titles with 12, which includes three Super Bowl wins and nine league titles prior to 1967.

The Packers finished the 2010 regular season with a moderate 10-6 record, finishing sixth overall in the NFC. But it was their three impressive wins during the playoffs last month which has earned them the ‘favourites’ tag for Monday’s game. 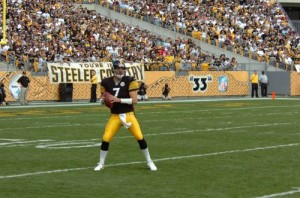 Pittsburgh is the oldest team in the AFC but, more importantly, it is the most successful team in Super Bowl history. It’s won six out of the 45 Super Bowls, including the 2006 and 2009 titles against the Seattle Seahawks and Arizona Cardinals respectively.

The Steelers finished the 2010 regular season with a 12-4 record, earning themselves the AFC North division title and the second overall seed in the AFC. They advanced through to the Super Bowl thanks to two close playoff wins over the Baltimore Ravens and the New York Jets.

BATTLE OF THE QUARTERBACKS:

The quarterback is the most crucial position in American Football. In fact you might even consider the quarterback to be the most important player in any sport known to man because they control the entire offense, deciding whether to run the ball or pass the ball.

Aaron Rodgers is not just the brain trust and excellent decision maker of the Green Bay offense. He is also a respected and inspirational leader. The 27-year-old has done a magnificent job in guiding a relatively young team to the Packers’ first Super Bowl appearance since 1998. He’s thrown 3922 yards and 28 touchdowns this season at an impressive QB rating of 101.2. Rodgers has a variety of wide receivers and tight ends to spread the ball out to, including star wide receiver’s Greg Jennings and Donald Driver. For so long, the 188 centimetre quarterback has lived in the shadow of Packers legend Brett Favre after he took over from Favre at the beginning of the 2008 season. However Rodgers has proved numerous times this season he is an excellent big-time performer and a win on Monday morning would be the final blow in freeing him from the Favre legacy.

Steelers quarterback Ben Roethlisberger has endured a life changing season in 2010-11, both on and off the field. The 28-year-old was investigated for sexual assault last year and was consequently suspended for four matches by the NFL due to a violation of the league’s personal conduct policy. Ever since returning to the field, Roethlisberger has bounced back in the best way possible, throwing 3200 yards and scoring 17 touchdowns from his 12 games. Despite Roethlisberger’s amazing throwing arm, he doesn’t have the luxury of a few classy and reliable wide receivers in front of him, unlike Rodgers. Therefore he enjoys giving the ball off to running back Rashard Mendenhall or even running the ball himself. On the field, “Big Ben” – due to his large 111 kilogram and 196 centimetre frame – is one of the all-time great leaders of the NFL and there is no doubt he will have the hunger and desire to make it three career Super Bowl wins.

No matter what team sport it is, the side with the best defence is normally the best team in the league. And there’s no doubt either of these two outstanding defensive units deserve to win on Monday.

The more games the Packers play, the more they improve as a team. Not only has the Rodgers-led offense taken big steps in 2010-11, the Packers’ defensive unit has played with supreme confidence for the majority of the year. They play with great discipline but also know when and when not to blitz their opposition, making it tough for any offensive unit to move the ball against them.

This game could swing either way, so both teams will need to hit the scoreboard in the first quarter. But with so much defensive pressure and intensity expected, it’s hard to see a high scoring game occurring, particularly with two outstanding defences.

However it’s hard to ignore the “Big Ben” factor. Roethlisberger has been there and done it before – twice. His experience and desperate desire to win might just be the decisive factor in what should be a ripper of a game to watch.

Ben Waterworth studies journalism at La Trobe and is rooting for the Steelers.