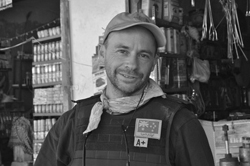 You only need three things to be a great journalist: curiosity, a passion to tell others and some healthy cynicism, says ABC correspondent Thom Cookes.

The most important is curiosity. You need to be a ‘nosy bastard’ says Cookes.

‘If you’ve got that, then you are nearly 70 per cent of the way there.’

It’s hard not be curious about Cookes. Though almost a ‘veteran’ – with 20 years experience – he is the epitome of the modern journalist. He can shoot and edit his own footage, as well as write and broadcast. He has even made two documentaries – something he would like to do more of.

So, is there anything he can’t do?

Well, yes – news. ‘I find it incredibly frustrating – the limitations of a one-minute 50 news story,’ confesses Cookes. ‘It’s a skill I admire, but I don’t have it.’

What Cookes is very good at, and passionate about, is current affairs. But it wasn’t until he picked up a camera and went to Papua New Guinea to film the 2002 elections ‘on spec’ for SBS’s Dateline that Cookes made the transition to be a television correspondent.

Till then Cookes had happily worked as a print journalist with The Age, and also did stints with BBC Radio and ABC’s Natural History Unit.

But Cookes admits he was ‘obsessed with PNG’ and just had to tell the story.

‘It’s a really good starting point – to do something that you are really interested it,’ says Cookes. ‘Because then you will do it well.’

And he did it incredibly well. Not only did Dateline accept the story, Cookes won a Walkley for his segment ‘PNG – Pigs and Politics’. He also joined Dateline as a permanent correspondent.

‘Dateline’s a really unusual beast,’ says Cookes. ‘You would drop into a place, and because of you are often working by yourself… you could stay somewhere a long period of time and soak it up. That was the great joy and great benefit of working in that style.’

By the time Cookes went to PNG he says he had a ‘firm grounding in traditional journalism’ in combination with good technical production skills, which helped enormously.

Cookes left Dateline to join the ABC in 2007 and now works for its current affairs program, Newsline, but also does special assignments for programs such as Four Corners.

But not much has changed in how he works, except he now has the large resources of the ABC behind him. And in the field he still prefers to work alone with a small camera. It’s less likely to intimidate people, says Cookes. ‘You don’t have that ‘bunny in the headlights’ situation’.

Working alone also means he is risking only himself in dangerous situations, which he often is in. Cookes has worked in conflict zones in Cambodia, Israel, Lebanon, Gaza, Kosovo and now Afghanistan.

To minimise the dangers, he plans carefully, working through possible risk scenarios. And with experience you develop a ‘sixth sense’ about how dangerous a situation is, says Cookes. But he warns that there will ‘come a time when you screw up or something happens that you don’t have control over’.

For Cookes that time nearly came on his recent assignment in Afghanistan where he made a bad call, and decided to follow three American soldiers to a building that was potentially booby-trapped, in an area covered with improvised explosives.

‘It’s probably the most frightened I’ve been ever working in journalism,’ says Cookes.

Journalists take such chances partly because there is ‘enormous pressure’ to take the same sort of risks as the soldiers because ‘that’s part of the connection with them’, says Cookes.

But it wasn’t those frightening moments in Afghanistan that has most scarred Cookes.

In 2006, while covering Israeli incursion into Gaza, Cookes witnessed a bloody, one-sided battle where families and children were killed in front of him.

‘I’ve got kids who are about the same age,’ says Cookes. ‘That was very difficult and I got extremely angry. And came out of that not entirely in one piece.’

And it’s not just the odd, isolated incident that takes a toll. Every time you go away, ‘you come back with a bit of baggage’, says Cookes. ‘There are things which you’ve experienced that the people around you haven’t experienced.’

It is this impact of his career on his family that has Cookes most concerned. And as his three children get older, he has changed his priorities profoundly.

‘I am less willing to put up with the dislocations of being away,’ says Cookes, who was often away for six months of the year on assignment.

The challenge now is to still satisfy his innate curiosity while spending more time with his family.

‘There is always a balance between your career and your family. And mine is swinging back towards my family.’

Emil Jeyaratnam is a Graduate Diploma in Journalism student at La Trobe University. You can read more of his work on his blog.