Polyamory is challenging the custom of having only one partner at a time, writes Jesse Robinson and Thomas Odell. 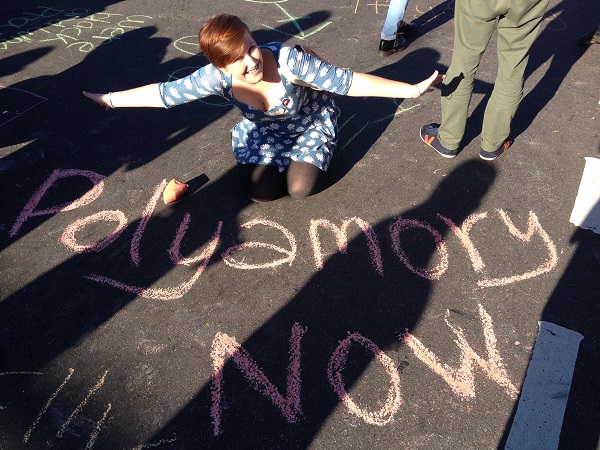 Cameron is a 27-year-old market researcher who lives in Melbourne with his partner Kate.

He’s also just started dating Elle. But it’s not what you think.

Cameron is in a polyamorous relationship.

He believes people should feel comfortable challenging the concept of having only one partner at a time.

“I feel as though we’re brought up taught about very monogamous ideas about love and finding the one true person, and this will be it for the rest of your life … that never really worked for me,” he tells upstart.

“Relationships take a lot of work, and it’s not that the idea of one person isn’t enough, it’s the idea of why limit yourself to that?”

Polyamory is being involved (romantically or otherwise) with multiple people, all with the full knowledge and consent of everyone involved in each relationship.

Anne Hunter, who is a polyamorist and the president of Poly VIC, says the practice is gaining prominence in Melbourne.

“There are new people joining Poly VIC everyday, and the rate is steadily increasing,” she tells upstart.

Coined by Morning Glory Zell in the 1980s, the term polyamory means ‘many loves’ and stems from the idea that one person cannot fulfill all of someone’s needs in a relationship.

But the concept is not for everyone.

“As far as I’m concerned, if you’ve got feelings for one person, I don’t think you can have the same feelings for another person … it’s just like playing with the other person,” La Trobe University student Zan says.

Another student, Zaynab, questions the ethics of it.

According to the polyamory community, there are a number of common myths and misconceptions that people believe about polyamory.

“The first one is that it’s all about sex,” Anne Hunter says.

“It’s often confused with polygamy, or with swinging or with cheating – that it’s just the same. One of the other really big myths is that it’s really bad for kids, and the other big myth is that it can’t work.”

Cameron says he has experienced some of the misconceptions first hand.

“The only people I’ve come across [where it was an issue] was my parents but they were like ‘Oh ok’, and kind of dismissed it.

“Mum was like, ‘Oh well I don’t really think this builds for a long lasting relationship.’”

Many people discover polyamory after being in monogamous relationships, and that means learning to deal with jealousy in a different way.

“My partner Elle is going through this, she’s been dating someone for I think two to two-and-a-half years, and they were monogamous for the first year or so and then decided to try being poly,” Cameron says.

“I think I’m just lucky in that it did work for me as I know that it is a big issue that comes up in a lot of poly relationships.”

Hunter says the key to getting past these problems is to meet people who are like-minded.

“It is really hard to try to move from monogamy to non-monogamy when you are surrounded by monogamous people who don’t understand it,” she says.

“[They] think it’s unethical, can’t support you in it, and every time there’s a problem in your relationship, they blame the polyamory.

“Meet other polyamorists, get to know people, get to hear different stories, get an idea of the range of ways of doing it and of kinds of experiences and start developing friendships with people who are poly,” she says.

Thomas Odell is a second year Bachelor of Journalism (Sport) student at La Trobe University. You can follow him on Twitter: @tomodell18