Life isn’t as easy as it seems for the 18-year-old Tik Tok star but you certainly wouldn’t know it. 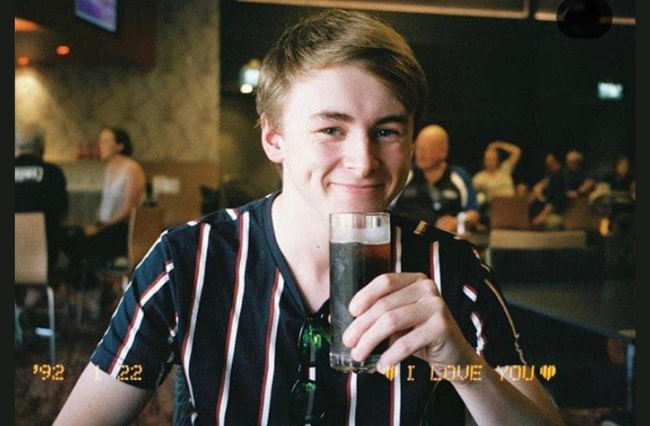 Growing up in the NSW country town of Corowa, Tik Tok sensation Blake Pavey enjoys spending time with his mates, going to the pub and watching his favourite team, the mighty Collingwood Magpies have a win.

With over 500,000 Tik Tok followers, Pavey is fast becoming a recognised personality across social media.

However, at just 6 weeks old, Blake was diagnosed with a rare inherited disorder, Cystic Fibrosis (CF). With a life expectancy of just 40, CF causes severe damage to the lungs, digestive system and other organs in the body.

Since Pavey can remember, he’s been required to take up to 40 tablets a day in order to control the illness and to deal with the build-up of mucus that gets trapped in his lungs and airways, creating many difficulties.

“It makes it very hard to breathe, pretty much like breathing through a straw 24/7. That’s what it feels like,” Pavey told upstart.

His dad, Paul, and mum, Jo, took him to many appointments when he was young, and tried giving him his medication while trying to keep the severity of the illness from him.

“I always knew I had it, but I never really knew how serious it was because my parents wanted to keep me protected from all the very serious stuff until I got older,” he said

But then a night in front of the TV meant Pavey would find out anyway.

“We were watching The Project one night when I was about seven or eight and they did a story about CF and dad wasn’t in the room so I was just sitting there all alone just listening to the show and then they said that the life expectancy is pretty young. That’s how I found out about it, pretty much on accident,” he said.

And surprisingly for some, Pavey has had no troubles coming to terms with it.

“It’s just been something that’s been pretty normal to me, so I don’t reckon it has ever been something to really accept I’d say. It’s just sort of always been the norm for me. It’s basically just trying to keep light-hearted about everything because I can’t control it, so there’s no point in really letting it control me,” he said.

While he’s lived with CF all his life, adjusting to becoming a viral sensation has been something new. And it almost never happened.

“I was always one of those people who never really had Tik Tok and I always refused to even think about getting the app in the first place…after a lot of convincing and a lot of nagging by one of my mates, I did give in and I got the app,” he said.

“I just started making little videos for my mates like doing trends and all of that regular stuff just to try and make my mates laugh.”

What separates the big influencers from the rest of the creators on the app is having a particular niche. Pavey’s Tik Tok’s often involve sketches of himself overdramatising various stereo-typical characters that are often found in different social situations.

“Basically, Paul, Tiff and Jess and all of those characters that are made up, they’ve been based around so many different people, they come from varying sort of places,” he said.

“The dad is based on my actual dad named Paul and then Tiff and Jess are based off basically girls at my school, except their personality traits have just taken it to level eleven.”

In December last year, he uploaded his first impersonation of the dad character, which received just under a million views. Since then Blake has been wary of not getting too ahead of himself.

“It’s crazy to see how far everything reaches but I’m just trying to stay grounded and not get too egotistical about it because I feel that’s where people start their downfall,” he said.

“I’ve been able to do some cool things in the short amount of time I’ve been on the platform and met some cool people and being able to connect with some other Tik Tokers and youtubers which I’ve enjoyed.”

Currently completing year 12 at Corowa High School, Pavey is weighing up a move from regional NSW to a major city in 2021, in hope that it will benefit his content creation and create an avenue to his future career aspirations.

“I’m a country boy living in rural NSW so I’m looking to take a move off to the city whether that be Melbourne or Gold Coast just for a change of pace and so I can continue doing all my social media and focus on YouTube,” he said

“I also want to try and do more professional work like stand-up and live shows and take everything by ear and try to ride the wave as much as I can.”

Article: James Strebinos is in his final year studying sports journalism, you can follow his Twitter @James_Strebinos