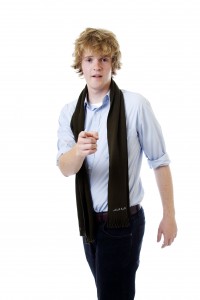 With a careers teacher for a mother, it’s not hard to imagine that Tom Ballard may have faced a bit of criticism over his decision to pursue stand-up comedy as his own vocation.  But after earning himself a slot on triple j and receiving the ‘Melbourne Airport Best Newcomer’ award at the Melbourne International Comedy Festival for his show, ‘Tom Ballard Is What He Is’, about his coming out to his family and friends in Warrnambool, this 19 year-old law drop-out is no longer just a ‘class clown’.

How was it for you growing up in Warrnambool?

It was both a blessing and a curse. I had a great family, went to a good school and had awesome friends. But if you’re not really into football or Nickelback, it can be a little bit suffocating. There is a relatively healthy arts scene there but you really want to get out of there if it’s something you want to pursue. It’s definitely provided me with material, that’s for sure.

You have been in comedy for a while, but when and how did it start for you?
I’ve always loved comedy; I used to watch the Gala and Seinfeld and loved all that kind of stuff. My first stand up gig was when I was 14 in the Comedy Festival’s Class Clowns stand-up competition. I told jokes about my penis, wore an ugly shirt and freaked out when I met Ross Noble, and since then I’ve been hooked.

Were there many avenues in Warrnambool to express your creativity?

On reflection, yes. I was involved in a lot of amateur theatre and made some of my best friends through that. I did drama and theatre studies at high school; my overarching ambition has always been to be an actor. I guess comedy just started to take me in a different direction and I’ve followed it.

How and when did triple j approach you?

Program Manager Chris Scaddan saw me in the RAW Comedy Final in 2006 and was apparently impressed. He got in touch with me, asked about my music interests and if I’d done any radio before. I sent in a tape of the community radio show I did with my friend Alex Dyson (which was truly a shambles) and for some reason they didn’t spit in our faces. Now we have a job and a desk and an email address and everything. It is mental!

At what point did you realise that comedy and the media were your career – after all, you were Dux and accepted into Law at Monash?
The Comedy Festival this year was the turning point. I was doing my debut solo show, presenting on the radio and going to uni at the same time and it was just silly. I had to make the call and I decided to drop out of uni and have a decent crack at this crazy career while I had the opportunity. I figured I could always go back to uni if it all goes tits up. So far I can pay bills and haven’t whored myself out too much, so I’m hanging in there.

Some people are comedians simply because they have quick wit but others see it as a more creative outlet. What is comedy for you?

I was initially attracted to stand-up purely for the attention. Everyone has to shut up and listen to you and you’re the only one on stage and everybody loves you because you get to make them laugh. Since then I’ve realised that comedy is significantly more than that. It’s so varied and challenging and raw and honest and chilling and thought-provoking and stimulating and joyful and instantaneous and you can do whatever the fuck you fucking want to. Daniel Kitson made me change my whole perspective on what comedy can be, but that’s also been blown out and expanded by the likes of Patton Oswalt and Bill Burr.

The Age said: “Watch this boy: he’s going places” – where are you going?
Um…”places” is about as specific as it gets in the comedy industry. It’s really important to me that I keep up my stand-up and make sure I keep getting better as a live performer. Otherwise, I’m going to try and say no a bit more often; I think it’s easy to stretch yourself too thin and produce mediocre stuff. I got great advice from a friend this year: “Do less, better”.  Generally speaking, though, I hope to be able tour around the country, continually writing new and better comedy and achieve something great. Something really great that’s never been done before and makes people laugh and think and be happy.

You can listen to Tom Ballard and Alex Dyson on triple j  Weekend Breakfast program from 6am-10am. And since this interview was completed it’s been confirmed that Tom and Alex will take up the reigns as weekday breakfast hosts at triple j in 2010. Tom Ballard’s own website can be found here.

Tyler Cameron has just completed his first year at La Trobe University in a Bacherlor of International Relations.