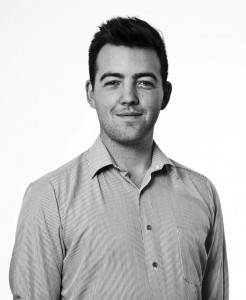 Tow Cowie, once an editor of upstart magazine, has only been working in the journalism industry for two years. After completing a Bachelor of Journalism at La Trobe University, Tom worked as an intern for Crikey! Realising that his education was coming to a close, he began the blog Tom Wants A Job in order to stand out in the crowd with possible employers. The power of social media did land Tom a job and he began working with Crikey! right after graduation.

One year later he is working for The Power Index, a sister-site to Crikey!, writing about the most powerful people in all aspects of Australia.

So where did your interest in journalism begin?

There was no real blinding moment of insight; I wasn’t one of those kids who was doing their own newspapers at age ten or anything like that. I went along into a commerce degree when I was first going to uni and absolutely hated it. I got a couple of years in and eventually dropped out. I spent a year or six months wondering what to do with my life. Eventually, I found out that I really enjoyed the media and I consumed it a lot. I loved current affairs and politics and that sort of thing. And sport. I originally decided that I would like to be a sports journalist; that dream lasted maybe three weeks of my first semester before I realised that I would kind of hate to report on sport all the time. I thought it would get old quite quickly, so I decided to keep all options open and be whatever journalist I could be and cover the news.

You got your first job pretty quickly after you finished school…

Yes, I approached my degree like I think a lot of other people did. I didn’t do anything extracurricular and didn’t do any extra work in the first couple years and thought I’ll just get my degree and it will be great. Then it sunk in what everyone was telling me- you’re not going to get a job just by doing the bare minimum. You have to go outside and do some extra work. So I started trying to get published in as many places as I could. Looking at other journalism students they seem to be doing so much extra work, and you have to, but there was that point where I decided I was just going to work really hard and approach it outside of the degree.

I got my first job and I started the day after I handed my last assignment in. I started pretty much straight away, which has been good and bad. Three years of uni and then straight into work; no kind of holiday or anything, but it was also a great opportunity that not many students or graduates get.

You worked for Crikey! first on an internship and then went over to The Power Index. How did you get there?

The Power Index is sort of a sister-site to Crikey! so it links in a way. Last year, my bosses at Crikey! just approached me and asked if I would like to work for one of their new publications and explained to me what they were trying to do. It sounded really interesting and different to what I was doing at the time. It was kind of straight news reporting; I didn’t have a beat and I could write whatever I wanted, whatever I could come across. This had a very specific angle so I thought that’d be great and that I’d give it a crack. So I started on The Power Index a year after I had been at Crikey! It was one year and straight into the next one. My first year at The Power Index is coming up.

Did you find it intimidating going from one year at Crikey! to writing on the most powerful people in Australia?

Yeah definitely, I don’t think you’d be a normal person if you weren’t intimidated because it’s definitely a step up. And they acknowledged that. They said that I was going to have to push myself, which is what you want to do. There are times where it gets quite stressful and you definitely have to be prepared and do your research. Some of the interviews, you sit down afterwards when they walk away and you’re like ‘wow! I actually interviewed that person, that’s great!’ It’s something that you wouldn’t expect to be doing in your first couple of years; and that’s something they’ve said to us, you know. It’s completely true that the opportunities you get at a small media company are not what you would get somewhere else. Somewhere like Private Media, which owns Crikey!, they give you more opportunities to try and extend yourself outside your age and your experience.

If you could write for anyone and write about anything, what would you do?

There is a part of me that still would love to be a travelling journalist, covering a massive sporting event. Say, if you were an Olympics reporter or a World Cup reporter and you got to go to an event, cover it and live it and breathe it for two or three weeks and be completely enveloped in this thing. But that’s the pinnacle of sports journalism and not an opportunity I would ever get.

I like writing long form journalism now. I didn’t anticipate that I would be doing that so soon and so early on in my career, but I’m really enjoying it. You think of the sort of current affairs magazines where you get more space and more time would be great. At the same time, working in a sort of breaking news environment at an organisation like the ABC would be a terrific experience as well.

What do you think is the most important characteristic or skill to have if you want to become a journalist?

I definitely think persistence. While it might also help you get a job; well you will, if you’re persistent you will get one. It is also great for when you are a journalist because when you are chasing a story, when you are following up leads, making the phone calls, doing the research, that same skill transfers perfectly across.

Thick skin is important. You definitely get criticised, regardless of what job you’re in someone will have a crack at you. It’s happened to me and every one of my colleagues has that as well. Journalism is one of those professions that people really love to knock. They always do those happiest profession lists and journalists always end up being down at the bottom. You are always in those situations where people might like to criticise you and where you have to do things you may not want to do. That’s one of those things about journalism; often you have to report on things that are not great. So you have to deal with those kinds of situations.

Also, confidence, I certainly didn’t have it when I started. I think you can build it and if you really enjoy [journalism] you will start to get more confident in your work and you can see yourself getting better. I look back at my old writing and look at my current writing and you can see a clear difference in my ability and it makes you that much more confident and will only help you progress in your career.