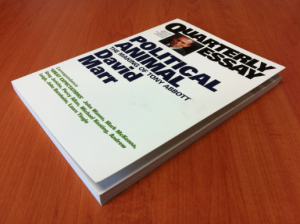 The Quarterly Essay can be seen as the kiss of death for the career of many a politician. Margaret Simons wrote a Quarterly Essay in 2004 examining Mark Latham a month before he lost the election. In 2009, Annabel Crabb profiled Malcolm Turnbull six months before he lost the post of leader of the opposition. David Marr’s own previous effort looked at Kevin Rudd and was thought to be an instrumental contribution to his downfall. Now with his present examination of Tony Abbott, many were wondering if lightning would strike again.

‘A year is an eternity in politics,’ Marr said cryptically. ‘And we’ve got a year until the election.’

Although he referred to Abbott at times as ‘the man who will be the next prime minister’, Marr was careful to hedge his bets.

is new Quarterly Essay is a painstaking examination of Abbott. It focuses on his formative years in student politics at Sydney University, how he drew inspiration from Catholic crusader Bob Santamaria, and his time as the press secretary for then leader of the opposition John Hewson in the early ’90s.

Marr spoke to a booked out session at the Wheeler Centre in Melbourne, outlining what he had intended to do his essay.

‘I wanted to show the reader what Australia looks like through the eyes of Abbott,’ Marr said. ‘It’s not a familiar view for most Australians. I’m just the reporter who has written how it is.’

One of the significant stories told in the Quarterly Essay details how Abbott physically intimidated a female opponent during a student election, by punching the wall next to her head.  Despite being interviewed at length by Marr, Abbott only allowed one statement to be quoted directly – a denial that the event ever took place.  Marr believed this to be false, and that the Leader of the Opposition should have treated it differently.

‘There are enough people who knew him and remember him from that time for me to believe that the story is accurate,’ he said. ‘Abbott should have admitted it, said that he regretted it, and pointed out that he’s a different person now – which he is. He’s learnt a lot from those days.’

The Quarterly Essay has just been released, but already its effects can be felt in parliament.

Marr was certain that more stories of Abbott’s past conduct would come to light in the near future.

Marr believes that Abbott is still very much the same man – he takes from that time his passionate devotion to the DLP – but that he has learnt some hard lessons.

‘He’s learnt to mask his principles until the last possible moment, especially if they scare people. The most crucial lesson that he’s learnt is that you don’t have to be loved and respected to win.

‘He has no agenda but to hold the line against the future, and not to let Australia drift in what he sees as the wrong direction.’

It was this division between the principles and policies of Tony Abbott that Marr believes was his central focus in the essay. While he followed Tony Abbott on various staged appearances, he had an hour – all off the record – to interview him.

‘I wish I could tell you exactly what he told me when I asked him why he wants to be prime minister. I find it really odd that he wouldn’t go on record.

‘I asked him, when the cards were on the table, which Abbott are we going to see? The principled, or the politician? I can’t tell you what he said,’ Marr emphasised carefully.

‘All I can tell you is that he gave me a most unsatisfactory answer.’