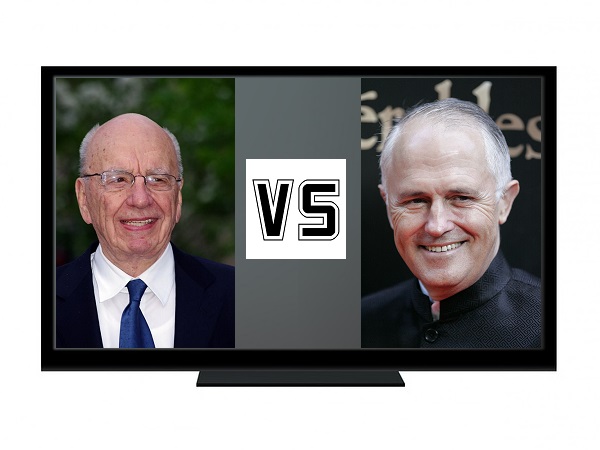 Communications Minister Malcolm Turnbull has recommended the government make extensive changes to Australian media ownership laws, including the removal of the “two-out-of-three” and “reach” rules.

The Howard Government introduced both laws in 2007, along with the removal of foreign ownership restrictions.

The two-out-of-three rule states that media organisations can only own two traditional sources of media, which includes radio, television and newspapers.

The reach rule prevents one TV licence holder from reaching 75 per cent of the population through affiliated broadcasts, such as Channel Nine’s rural channel, Win.

The proposed changes would allow Fairfax Media to merge with a television network, like Seven or Nine.

Aust! Turnbull’s plans to scrap certain rules suit buddies at Nine. Can’t oppose dumping all regs but not this. Nice to see how MT plays.

Associate Media and Communications Professor at University of Sydney, Tim Dwyer, told upstart that Murdoch was “high as a kite” on his own power and has vested interests.

“He’s out for Rupert and News Corporation, end of story,” he says.

Dwyer notes that others are in favour of changing the long-standing laws.

“The usual response from the advocates of liberalising the 75 per cent rule is that it will save the commercial TV industry’s bacon from the likes of Google and various IPTV on demand providers like Netflix, Stan., Quickflix, Foxtel’s Presto, their new service Boxsets, and your favourite VPN accessed networks like US Netflix or Hulu,” Dwyer says.

“The 75 per cent rule is from the broadcast era, so there’s a valid argument that it is no longer working the way it was meant to.”

Opponents of the two-out-of-three rule argue that the law has become redundant due to the growth of the internet; however, Dwyer believes that abolishing the laws altogether would be a mistake.

“[The new laws] will lead to further ongoing concentration and consolidation in media ownership across media sectors, which will further dial down the number of media voices in Australia,” he says.

Dwyer also believes that, although it is arguably outdated, removing the reach rule is unlikely to have an impact that would allow television networks to compete with online services.

So, if Turnbull’s proposed changes are not the best plan of action then what alternatives are there?

“Millions of taxpayer dollars were spent on the Convergence Review and the Finkelstein inquiries. Their reports were thrown in the bin.”

The Convergence Review, which submitted its final report in 2012, recommends that the government scrap content licences as they apply to some broadcasting mediums but not others, and that regulation should be based on the size of the institution rather than the medium.

The Finkelstein inquiries came to the conclusion that the media needs more rigorous regulation, not less. It also suggests that a new statutory body be created to enforce journalistic standards across all media, including the internet.

“Australia desperately needs media ownership rules that are fit for the 21st century and specifically designed for the world of online news, Facebook and Google,” Dwyer says.

Scrapping the two-out-of-three and reach rules altogether will likely increase the concentration of media ownership in Australia.

“Media ownership in Australia is like Coles and Woolworths: two big players who dominate the market and no real choice for the majority of Australians,” Dwyer says, referring to Fairfax Media and News Corp.

Whether or not Turnbull’s proposed changes go ahead it is unlikely Australia’s disproportionate concentration of media ownership will be addressed anytime soon.