New mothers can have just one visitor in the maternity ward during the pandemic, and their babies could be healthier for it. 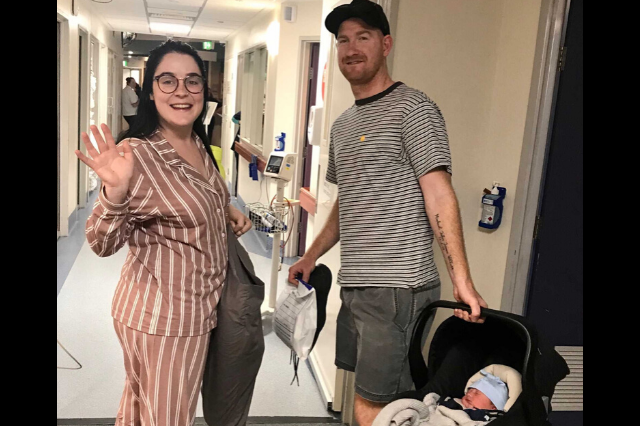 It was in the middle of the coronavirus pandemic when Vanessa Sandral went into labour with her second son, Dustin. During her first childbirth, she’d leaned on her mother and fiancé for reassurance and strength, but now, her fiancé Khris could be her only support.

Since the single visitor restrictions were implemented in Australian hospitals, however, some midwives started to see how limiting the number of visitors could actually benefit the health of newborns.

While the coronavirus health advice given to the general public is also applied to expectant mothers, the Royal Australian and New Zealand College of Obstetricians and Gynaecologists (RANZCOG) suggests that pregnant women should stay at home where possible and hospitals should limit their number of antenatal visits.

For Sandral the stress of these limitations and the pandemic made labour more daunting than her first time around, particularly because she was aware of the new challenges she would have to face. Like other expectant mums, Sandral felt cautious, so planned to isolate herself months before and after the birth and strictly limit the couple’s support network to include only her mother.

Adjusting their preparations was just one of the tribulations for Sandral and her partner. After arriving in hospital to give birth, some other confronting realities started to emerge.

“We were having contractions four to five minutes apart and we had to have a COVID-19 check. So that was frustrating when you’re having a contraction and had to get your temperature checked and stand still,” she told upstart.

Labour in those conditions was a challenging experience Sandral says she would rather not go through again. However, despite feeling uneasy that masks covered the faces of everyone in the birth suite, the midwives ensured the couple were comfortable and avoided mentioning the virus.

But even with Sandral’s partner talking through the mask to guide her through the labour she yearned for her mother who accompanied her the first time she gave birth.

“That I probably found hard because I had Mum with me last time. Khris was amazing but that bond you have with your mum… I still called out for her even when she wasn’t there when I was giving birth.”

Now she will forever be part of an exclusive group of mothers that gave birth during a global pandemic, under some of the most rigorous protocols.

However, the regulations have been seen by some midwives to prompt a range of educational and health benefits. Tessa Clarke is a registered midwife and nurse at Barwon Health in Geelong and has found that there are advantages to working in a maternity ward where visitor numbers are strictly limited.

“I think it means that you can spend more time with the women, especially focusing on breastfeeding,” she told upstart.

“I would find a lot of the time if people were having a multitude of visitors coming in and out of the room, quite often they were putting off their feeds and not wanting to breastfeed in front of friends and family.”

The extra one-on-one time also gives midwives like Clarke the chance to educate the new mum, and ensure more skin-to-skin contact, though Clarke admits the reduced number of visitors doesn’t appeal to every mother.

“I think from a midwife’s perspective we’ve been enjoying that. And I think patients have as well but then you do get some patients that would normally have a lot in and out so that’s upsetting for them if they can’t have a support network around them.”

On top of the educational advantages, Clarke believes there could be more beneficial flow on effects to a baby’s health by limiting visitor numbers in the future.

“If that is something that is working, and women are able to successfully breastfeed then absolutely that’s going to help babies return to their birth weight quicker,” she said.

“It would be interesting to see down the track if anyone would look into reducing visitors postnatally and whether that does improve breastfeeding rates and babies returning back to birth weight quicker. But in my personal opinion I would say it does.”

While most changes are manageable for midwives and mums, Clarke has found some of the adjustments to be difficult, such as wearing a facemask.

“At the moment we’re wearing masks all the time for any patient contact in birthing suite and in the assessment unit,” Clarke said.

“It’s confronting and it’s a little bit harder on first impressions to develop a good rapport when you’ve got all the gear on your face.”

Another measure suggested by RANZCOG to minimise the risk of coronavirus is that hospitals consider discharging mother and child earlier than usual. Even though the recommended length of hospital stays after birth hasn’t changed at Barwon Health, Clarke is starting to see mothers head home sooner.

“I think just from personal experience I’m finding that if women are fairly low risk and otherwise well, they’re more inclined to want to go home a bit sooner.”

Sandral also felt like she was being encouraged to leave her hospital about 13 hours after giving birth, but was keen to go back to the comforts of home.

“We got in and out really quick, like they basically push you out the door, they don’t want you to stay in if you’re healthy and happy,” she said.

Article: Alexia Mitchell is a third-year Media and Communications (Sports Journalism) student at La Trobe University. You can follow her on Twitter @lexilegs99