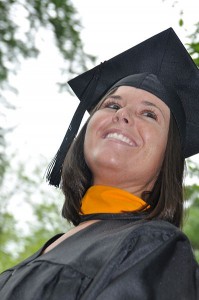 Year 12 students will be graduating in November. (Photo: Wikimedia commons)

It’s that time of year again. The time where graduating high school students take their first big step into the big bad world. There are so many decisions you have to make such as what university to go to, what course to do, whether to live on campus.  But wait a minute. Am I not just assuming that every year twelve student will head to university straight away? What ever happened to gap years; seeing the world and having time to figure out your life’s ambitions?

The assumption that students will continue into university straight after high school is also predominant in France. As Pauline Barthelemey explains: ‘The year twelve exam is a very big deal over here. Your parents go crazy all year putting a lot of pressure on you. It is such a big deal because your results sort of determine what you will do the year after.’

When it comes to gap years in France Pauline says:  ‘If you take a gap year straight out of high school, it’s like you’re a loser because you don’t know what you’re going to do with your life. It’s not true of course, but that’s just what it seems like.’

Whilst Australia and France share similar mindset of school leavers, the pressure to attend university straight after high school is not the same in other parts of the world.

Anna Cdejorford, a student from Sweden says: ‘I can’t believe Australians go to university so young. At that age I had no idea what I wanted to do. It’s normal in Sweden to work, travel and experience life for a few years before making the decision of what to study.’

A study on Swedish school leavers showed that nearly half of Swedish students were over 25 years old when they began their studies, whereas in most other countries students are around 20 years old.

The mature age of Swedish students compared to Australian students makes me wonder about Australia’s drop out rate. If students were more informed and mature around the time that they choose their course, would the drop out rates be lower? The assumption that eighteen years old, or even younger, have to determine the rest of their lives at such a young age seems like a lot of pressure to me.

Close to one in five students drop out of Australian universities by the end of their first year. They blame unhappiness with the subjects they chose, financial hardship, failing courses and the opportunity to upgrade to a better institution for the high fallout rate.

A break from study between high school and university can also be beneficial for students, in order to learn about themselves and potentially make better decisions regarding their career.

Lucy Teague-Neeld, an Australian high school graduate of 2008 says: ‘Up until the end of year twelve I wanted to be an osteopath. But during my gap year and travel to Africa, I discovered that I really wanted to be an obstetrician. Now I can’t even imagine studying anything else.’

Taking a year or more off can also benefit a person’s commitment to study. It has been shown in recent studies that mature students appear to have a strong commitment to study, intention to persevere and desire for personal fulfillment as opposed to students straight out of high school who are sick of studying and are happy doing the bare minimum to just to scrape by.

Don’t get me wrong. I’m not saying that going to university straight away is necessarily a bad thing. I did it and I love it. But I do often wonder whether we should be more like Sweden in this regard.

Giving graduating high school students the option to continue study, or take a few years off could potentially be more beneficial than forcefully nudging them in the ‘right’ direction. If we gave students the opportunity to have a break, then we may be produce better graduates and a lower drop out rate in the future.