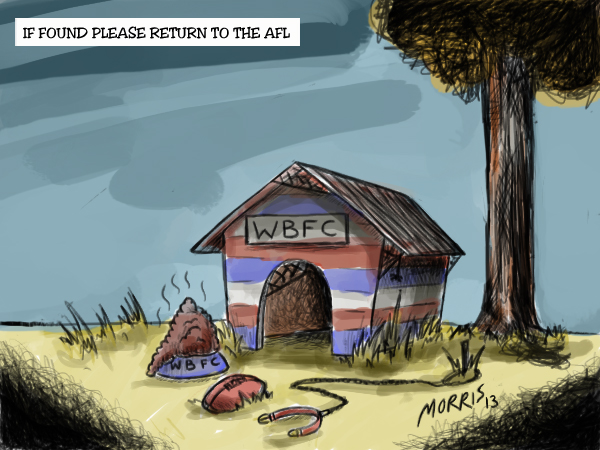 It has been a steep decline for a club that played in the last of three consecutive preliminary finals just three seasons ago.

You need only glance over the 2010 playing list to get a sense of how much has changed. Of the 40 players on the Bulldogs’ 2010 senior list, just 20 remain. Of the 2010 preliminary final squad of 25 – including three emergencies – 13 are gone. This includes former-captain Brad Johnson, dual All-Australian full-back Brian Lake and spearhead Barry Hall, who finished his career with 746 goals.

Any way you look at it, there have been drastic changes made to the Bulldogs’ list. While a number of senior players remain, those who have come to the club recently are very inexperienced.

The last few years have also seen a change in coach. Brendan McCartney took over from Rodney Eade at the end of 2011 and brought with him a new coaching mantra. Above all else, McCartney values players who can win their own ball.

It hasn’t been widely acknowledged but the young Bulldogs are improving in this area. In all but two games this season the Western Bulldogs have won the contested possession count.

There have been occasions when the Bulldogs have been smashed on the scoreboard – against Adelaide and West Coast, for instance – but have finished the match with more contested possessions than their opponents. As well as highlighting the Dogs’ toughness around the ball, it also shows they’ve never thrown in the towel, even when they’ve trailed by an insurmountable margin.

It’s unusual to see such resilience in a young side.

Pleasingly, the Dogs have also proven they can match it with some of the competition’s most desperate ball winners, coming up trumps in the contested possession count against both Geelong and Fremantle.

But amidst the spike in contested possessions is an even bigger positive for Bulldog fans. In recent years, it has been midfield stalwarts Mathew Boyd and Daniel Cross who have led the club for contested possessions, clearances and tackles. This year, a new leader has emerged.

The deeds of 20 year-old Tom Liberatore – son of Brownlow medalist Tony – stack up alongside those of the best inside midfielders in the competition. Liberatore is ranked third in the league for clearances, fifth in tackles and sixth in contested possessions.

He’s not the only young player to take steps forward in 2013 though; key forward Liam Jones is ranked fourth in the competition for contested marks and is now providing teammates with a genuine marking target inside attacking 50.

At the other end of the ground, Jordan Roughead is being groomed to fill the shoes of departed full-back Brian Lake. Roughead has already taken some big scalps in season 2013, restricting Jonathon Brown to just one goal, and Matthew Pavlich to two.

Roughead’s mentor, six-time All-Australian full-back Matthew Scarlett, believes he will become “one of the best key position players in the league, even from this year.”

Some might put these comments down to Scarlett’s involvement with the club, but the former Cat has never been one to make bold statements. As coach Brendan McCartney points out, Scarlett “doesn’t give out praise that often.”

Roughead is likely to benefit from the return of another tall defender – the not gone, but perhaps forgotten, Tom Williams. Williams was sidelined with injury for all but three games in 2012 but is expected to return to senior football in coming weeks. He will provide the Bulldogs’ backline with both physical and mental maturity.

So too will Brett Goodes, having served his two-match suspension for a high bump on Geelong’s Josh Caddy. In his first season of AFL, 29-year-old recruit Goodes has been a revelation. His pinpoint kicking and cool head in the back half has helped settle the young Dog’s defence.

Mature age recruit Nick Lower has also been successful, particularly in limiting the influence of opposition midfielders. Last weekend, Lower got the better of North Melbourne skipper Andrew Swallow, laying a club-record 15 tackles for the match in the process.

The most pressing concern for the Bulldogs is consistency. Most young players show glimpses of their capabilities but struggle to maintain an AFL standard for four quarters. Given the fact the Bulldogs are a very young side, inconsistency – both throughout games and from one week to the next – seems largely inevitable.

At their best, the Dogs are only one goal per quarter short of the best teams in the competition – as they showed in the 21-point loss to Geelong in round five. But supporters can’t expect rapid improvements each week.

Fans should instead look for a steady improvement over a substantial period of time. As coach Brendan McCartney pointed out last week, young players don’t develop overnight.

Eventually though, they will develop, and from all accounts Brendan McCartney is the best man to coach the young Dogs. Mathew Egan, former Cats defender and now assistant coach at Essendon, believes McCartney is the “best teacher” in the game.

Bomber forward Jason Winderlich mirrored those thoughts. Even after McCartney had left Essendon to coach the Bulldogs, Winderlich labelled him the best coach he’d ever had. It’s not as though Winderlich has been starved of quality coaching throughout his career either; Mark Thompson, Kevin Sheedy, James Hird and Mark Harvey have all coached him during his time at Essendon.

We might have to wait a few years before we can fairly assess Brendan McCartney’s worth as a senior coach. After all, he’s building this side from the ground up. It’s early days, but there are a number of signs that suggest the Dogs are building.