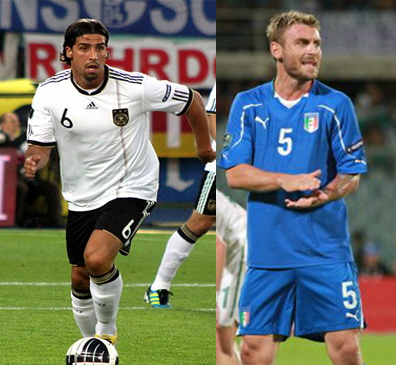 Who will win the midfield battle between Sami Khedira and Daniele De Rossi? (images: Steindy & Roberto Vicario via wikimedia)

Germany and Italy is one of football’s oldest and most fascinating rivalries, and tonight the contest is re-ignited once again.

As two of Europe’s footballing powerhouses, Germany and Italy have had some classic encounters. The two have met 30 times, and Italy have a slight edge on the Germans, boasting 14 wins to the Germans seven, while nine of the encounters have been drawn.

The two nations have played out a number of renowned matches, including the ‘game of the century’ – Italy’s 4-3 Semi Final win at the 1970 FIFA World Cup – as well as the 2006 FIFA World Cup Semi Final – in which two extra-time goals from Fabio Grosso and Alessandro del Piero sent the Azzurri onto their fourth world championship.

Germany’s route to the EURO 2012 Semi Finals has been almost perfect. The Germans have been arguably the most attractive and dominant side in Poland and Ukraine, and have won their first four matches.

Germany started slowly with a scrappy (and somewhat lucky) 1-0 win over Portugal, but then kicked its tournament into gear with a 2-1 win over the Dutch, and ensured it would win Group B with a 2-1 win against Denmark.

Germany was drawn against Greece in the Quarter Finals, and Manager Joachim Löw caused a stir when he opted to bench star players Mario Gomez, Lucas Podolski, and Thomas Müller. The changes made little difference to the outcome, as Germany thumped the Greeks 4-2.

Italy’s tournament began with promise, following a 1-1 draw with Spain, in which Italy held the lead (for about two minutes). Italy looked strong against Croatia, but a lax second half resulted in another 1-1 draw. Italy then qualified for the Quarter Finals with a 2-0 win over Ireland.

The Italians drew England in the Quarter Finals, and while dominating both possession and attempts on target (64 per cent & 35 respectively), failed to beat England in normal time. Extra time saw two very tired sides slug away, and the Italian fans though momentarily that they had taken the lead through a Nocerino header, but the goal was ruled offside. The match then went to penalties, in which Italy emerged 4-2 winners.

Both sides have popular and positive managers; who send their sides out to play attractive, attacking football.

Joachim Löw has the greatest percentage of wins of any manager of the national team, which stands at 69.5 per cent (57 wins from 82 matches). Yet Löw will not be viewed in the same light as the likes of Beckenbauer, Berti Vogts or Helmut Schön until he finally wins a trophy. He has come close, after making the final of EURO 2008 and the Semi Finals of the 2010 FIFA World Cup, but not quite close enough.

Cesare Prandelli has spectacularly turned Italy back into one of Europe’s best, after its dismal display at the 2010 FIFA World Cup. After employing a 3-5-2 formation during the group stage, Prandelli switched to a slightly more conservative back-four in the Quarter Finals against England, yet his side continued to barrage the opposing goal – in almost un-Italian fashion.

EYEBROW-RAISER: Germany Captain Phillip Lahm hit out at the anonymous source who has been leaking team selections to the media, branding them a ‘disgrace’. The mole leaked Germany’s team line-up before the Quarter Final against Greece.

MUST SEE: Some of the lighter moments of EURO 2012 thus far:

REASONS TO CHEER FOR ITALY: Prandelli has the Azzurri playing flowing, attacking football that is entertaining to watch, in a side that has re-built better than France, following the 2010 FIFA World Cup.

REASONS TO NOT CHEER FOR ITALY: The 2006 World Cup. Or, you live in Lygon St and enjoy your sleep. And some of them cheat might have cheated.

TONIGHT: While history is on Italy’s side, Germany has form and fitness for tonight’s clash. The Germans have enjoyed an extra two days rest than the Italians, as well as having rested the likes of Gomez, Podolski, and Müller. Miroslav Klose, Andre Schurrle and Marco Reus all started against Greece, but are still fresh, should Löw utilise them against Italy.

While it took Germany 39 minutes to find the net against Greece, the goals began to flow in the second half, as Germany’s finishing became far more clinical.

The same cannot be said for Italy. While Prandelli’s men absolutely battered the English in what pundit Gary McAllister labelled a ‘0-0 Massacre’, Prandelli will be concerned with his sides apparent inability to finish off the English in normal time.

The key for Italy is Andrea Pirlo. Pirlo was named Man of the Match against England, and truly stood out with his world-class passing display, as well as his clever chipped-penalty in the shoot-out. If Italy is to pick apart the Germans, it will be through yet another swashbuckling display from Pirlo.

Yet Pirlo has been in dire need of assistance. While he has helped the Italians carve out a number of opportunities in the past four matches, Italy has only scored four goals in regulation time – and one of them a stunning free-kick for Pirlo himself. For the Italians to advance to the final, their forwards must begin to fire and finish chances.

Germany has done practically everything right thus far, but now is certainly not the time to relax or buckle under the immense public expectation – like what happened in 2006. Mesut Ozil hardly looked to have shifted out of second gear against the Greeks, and will be heavily relied upon to tear through the solid Italian defence. He will be aptly supported by Schweinsteiger and Khedira in the middle, and has a variety of attacking options to push forward through.

2012 seems like Germany’s year, and after coming so close in 2006, 2008 and 2010, the Germans should clinically finish off Italy and advance to the final. Yet as history has shown, the Italians always turn up to play against Germany, and we should see a very tight match. Germany to win 2-1 in extra time.