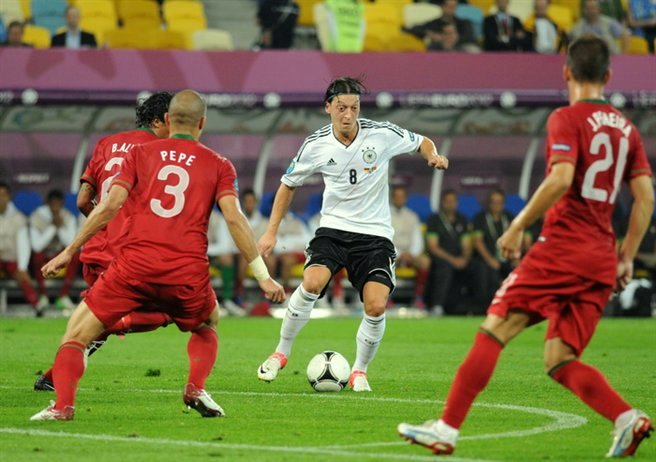 It took Germany 72 minutes to break down the staunch Portuguese defense in the group stage, and the Greeks will be just as tough. (image: Ilja Chochłow via wikimedia)

This Quarter-Final shapes as a tactical tussle; a game that is as likely to be decided by a scrappy tap-in as it is by a fleeting counter attack.

In a difficult group, the Germans defeated Portugal, Denmark and the Netherlands en-route to the knockout stages. Mario Gomez’s second half header sunk the Portuguese, who had up until then been content to sit behind the ball and disappointingly seemed to lack any drive or ambition.

Gomez then struck twice against the hapless Netherlands, both goals largely thanks to his Bayern Munich teammate Bastian Schweinsteiger.

Their good form continued just last week when they held off Denmark 2-1 to advance unbeaten and improving as each game went by. In each of their three group games, the Germans were presented with stubborn opponents, all of them resolute in defence and largely unthreatening up forward despite Cristiano Ronaldo’s and Robin Van Persie’s presence.

They are far from playing the free-flowing football that was evident in South Africa two years ago, but German manager Joachim Low insists this is more a result their opponents negativity, rather than their own inhibitions. Five goals in three games while not horrendous, is certainly not an expected return from a team that finished unbeaten and on top of their group.

In contrast, Greece has progressed to tonight’s quarter-final on the back of a stirring 1-0 success over Russia last Saturday, a win that was reminiscent of their victorious Euro 2004 campaign. In their two previous group games, the dogged Greeks drew 1-1 with Poland, lost 2-1 to the Czech Republic to set up a make-or-break encounter with Dick Advocaat’s Russians.

MUST-SEE: Forget that Greece have barely scraped through to the knockout phase. Forget their financial instability. Forget the dominance of Germany and Spain so far at this tournament. Cast your minds back to Euro 2004 to relive possibly the greatest upset in Euro history. Oh, and it’s always nice to see Ronaldo shed a tear or two.

EYEBROW RAISER: Joachim Löw must be delighted with his teams flawless start to this tournament, and pleased with his new contract that will keep him as the German manager until July 2014. However, his personal hygiene isn’t as good as it should be. Take a look at this video; Löw’s clean-cut image may be tarnished forever.

BALOTELLI WATCH: Mario Balotelli is in the news most days. Whether it’s his own field exploits, good or bad, or his off-field controversies – mostly bad, Balotelli is a journalists dream. At Italian midfielder Daniele De Rossi’s press conference yesterday, much of the talk was centred on the enigmatic Manchester City striker, whose volley against the Republic of Ireland was one of the goals of the tournament. De Rossi was candid in his judgement of Balotelli, admitting that the behind closed doors the Italian players have talked a lot about him. Have a read, and then take a look at this hot-off-the-press meme: 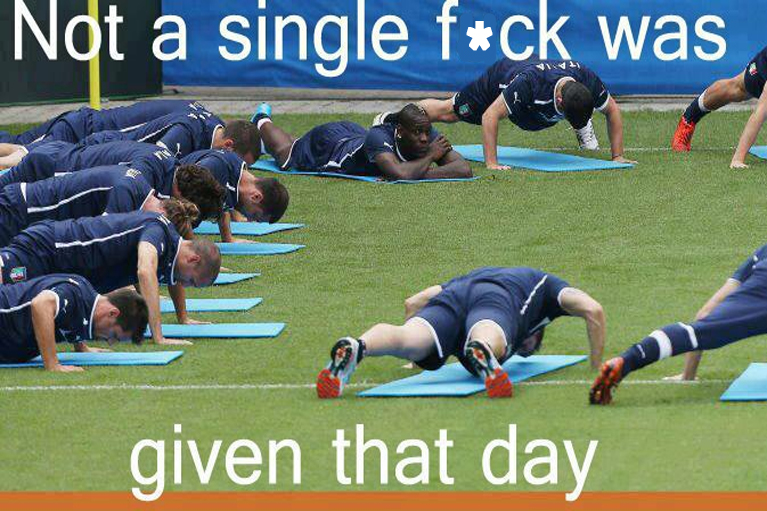 REASONS TO CHEER FOR GREECE: Have some compassion for the 11-million Greeks who are struggling with the economic uncertainty that engulfs their country. In a similar way to which Don Bradman gave hope to millions of Australians in the Great Depression, let’s hope that Greece can cause a major boilover against the highly fancied Germans tonight to bring a smile to the face of so many people in Greece.

With Australia now a multi-cultural society, it would almost be un-Australian to cheer for the Germans – almost.

REASONS NOT TO CHEER FOR GERMANY: We love an underdog, and Germany, while winning, haven’t exactly set the world on fire with their flair or creativity moving forward. A technically gifted team that possesses a raft of individual stars, maybe if Greece win we may be able to momentarily forget the German’s 4-0 drubbing of the Socceroos in the 2010 World Cup.

It’s drawing a long bow, but it’s worth a thought nonetheless.

REASONS NOT TO WATCH AT ALL: Kick-off time is at 4.45am, bordering on inhumane hours. Aside from the fact that it’s hardly going to be a great free-flowing spectacle, it’s also no more than 3 degrees at that hour of the night.

TONIGHT: If it wasn’t for inspirational captain Giorgos Karagounis, Greece wouldn’t have made it this far. His goal just prior to the half-time whistle was enough to catapult his team into the last eight. They will be without him tonight, as he serves a suspension that he received for simulation against the Russians. Interestingly, this may be a good omen for the Greeks, as in 2004 Karagounis was also ruled out for the quarter-final against France for picking up two yellow cards in the group stage.  Greece famously went onto win the tournament, after defeating the French 1-0.

Grigoris Makos appears the favourite to replace his captain tonight, with 19-year old Kostas Fortounis also a chance to gain a starting berth in midfield.

In addition to this, Greece boss Fernando Santos will be without Jose Holebas who is also suspended, and there is significant doubt over the fitness of goalkeeper Kostas Chalkias whose hamstring is still troubling him after he strained it against the Czech Republic.

For Germany, their game will revolve around lone-striker and golden boot contender Mario Gomez, whose three goals in three games sees him sit equal top of the goal scoring table. He is wonderfully supported by experienced internationals Mesut Ozil and Lukas Podolski, the latter scoring the opener against Denmark last week.

The Germans are likely to make just one change ahead of the match in Gdansk tonight, with defender Jerome Boateng likely to replace Lars Bender (who scored the winner versus Denmark) at right-back after serving his one-match ban.

They possess undeniable quality on every line, and it’s no surprise that they have won each of their last 14 competitive international fixtures with their abundance of class.

Expect Greece to sit tight and deep in defence. The Germans will bombard them at every opportunity and maintain possession. The danger for Santos’s men is if they concede early, they will then be forced to open up and attack in search of an equaliser, which will consequently leave more holes for the likes of Ozil and Schweinsteiger to dissect.

In saying this, Germany have struggled in recent times to continually break down their defensively minded opponents, yet it is hard to see Greece penetrating the compact German defence with anything but a set play.

Anticipate a predominantly one-sided arm wrestle with Germany’s class ultimately too much for the spirited Greeks to handle.