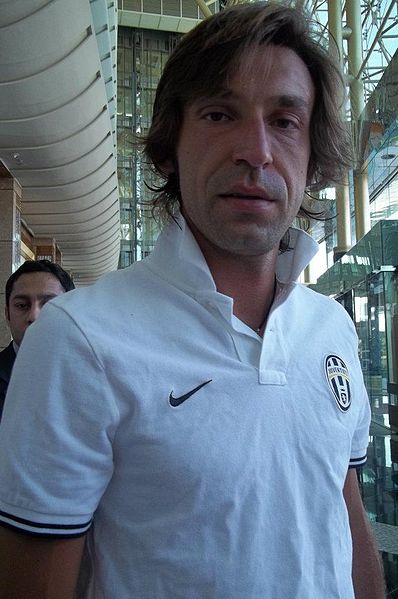 Pirlo was at his destructive best against the Spanish, can he pull the strings against Croatia to help Italy towards the Quarter Finals? (image: F1fans via wikimedia)

Spain was not at its best last Sunday, but by the same token the Azzurri were excellent, and a 1-1 draw was probably a fair result.

Antonio Di Natale’s goal came just moments after he was brought onto the pitch, an inspired finish from the man who famously missed a penalty four years ago against the same opponent in the quarter-final.

Vicente Del Bosque’s tactics were questionable, utilising six central midfielders and creating a narrow formation that didn’t allow for the class of the Spanish midfield to stretch the Italians wide.

The Azzurri will be brimming with confidence, as will the Croats ahead of their encounter this evening. Andrea Pirlo was phenomenal against Spain and will need a similar performance in the heart of midfield in order to quell Luka Modric, whose playmaking was equally as impressive in his side’s 3-1 demolition of the Republic of Ireland.

For a team which netted more goals than any other from headers in qualifying, Croatia scored two out of their three winners versus the Republic of Ireland in this fashion. Mario Mandzukic was a star up front, and Captain Darijo Srna was ever-present as an attacking right-back.

Beanie-wearing Croat manager Slaven Bilic was delighted with his team’s performance. ‘We outplayed them physically, tactically and psychologically,’ he said.

The Republic of Ireland faces an uphill battle if they are to progress with games against the last two World Cup winners to come.

MUST-SEE: Nobody can dispute the national pride of the Irish fans. Despite the lacklustre display against Croatia last week, they were as raucous as ever. Take a look at this show of support from Irish radio Station ‘Today FM,’ and pay special attention to the chorus “You’ll never beat the Irish,” While this may be appropriate for the qualification process, it looks to be a little far-fetched after their performance in Poznan last week.

Nevertheless, the song rocketed to number one in Ireland and raised almost $A3million for a local cancer charity.

EYEBROW RAISER: Iranian police have shut down a cinema which was showing live Euro 2012 games because they sold tickets to women. In a staggering display of sexism, the deputy police commander in charge of social affairs in Tehran said that the environment was “inappropriate” for women and that the women “should thank the police for the ban.”

BALOTELLI WATCH: Italian striker Mario Balotelli’s worst fears were confirmed on Sunday, when he was subjected to racist taunts by a small Spanish section of the crowd. He hasn’t commented since the game, in which he struggled to make an impact before being substituted just before the hour-mark.

Racism has become an unwelcome central theme at this tournament, with Balotelli claiming that he would walk off the pitch if he was racially abused by the crowd.

The Russia versus Czech Republic game is being investigated by UEFA as well for racist chants which were allegedly directed at the Czech Republic’s Theodor Gebre Selassie.

REASONS TO WATCH CROATIA: It’s simple: because they are playing beautiful football.

It’s not based on a huge amount of individual class – although they do possess some quality players, none more so than Modric – rather their aesthetic beauty lies in their technical proficiency. It’s the one touch, the ability to play with great width and the desire to push numbers forward that was so refreshing in their victory over the Irish last week.

REASONS NOT TO WATCH ANY EURO GAMES: Aside from the small monthly Setanta Sports fee, and the inevitable wallet-crippling Red Bull-buying late nights – is a group match really worth missing a French Open Grand Slam Final for? Or, West Indian Tino Best belting 14 boundaries and one six on his way to the highest ever score for a number 11 in international cricket?

The answer is probably, but now you know your options!

TONIGHT: Purely on form, the Italy versus Croatia game is set to be a fascinating affair. Both teams were excellent in their own ways last week against vastly different opponents. Italy more than held their own against the all-conquering Spaniards, while Croatia obliterated the hapless Irish.

Cesare Prandelli  will seek to limit Modric’s time on the ball, something Ireland were unable to do. Internally, he will need to keep the peace in the Italian camp – never an easy task considering the off-field controversies that have engulfed the national setup in recent times combined with Balotelli’s presence in the dressing room.

Croatia’s outgoing manager Slaven Bilic will be intent on nullifying the influence of Andrea Pirlo in midfield and the electric Antonio Cassano upfront.

Both teams know just how crucial this encounter is and how vital momentum can be in major tournaments. It promises to be a tactical arm-wrestle, one which Italy should scrape through in a thriller. (Prediction: Italy 2 Croatia 1)

On paper, Spain versus the Republic of Ireland is a foregone conclusion. However, never discount an Irish team with their backs against the wall. They scored half of their goals in qualifying from set-pieces, and will need to take any chance they have from a dead ball situation to test an arguably vulnerable Spanish defence which looked slightly rudderless without Carles Puyol in their first game.

The question for Vicente del Bosque is whether to stick with his highly centralised, striker-less formation, or to advance to a more traditional setup with Fernando Torres as a focal point, superbly supported by the likes of Xavi and Andres Iniesta.

The Republic of Ireland is a perennial giant killer, but the Croatian game may have knocked the wind out of their sales. (Prediction: Spain 4 Ireland 0)

Tom Morris is a second-year Bachelor of Journalism (Sport) student at La Trobe, and part of upstart’s EURO 2012 team. You can follow him on Twitter @tommorris32.