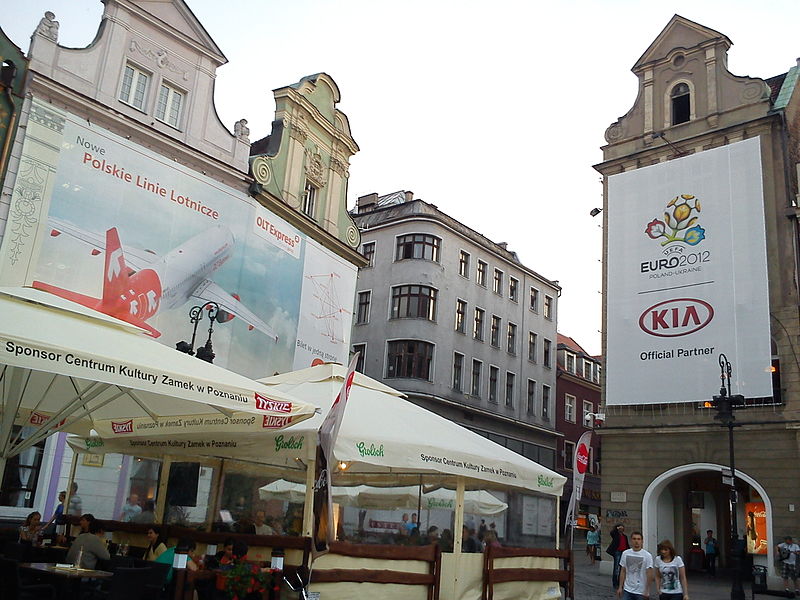 Poznan is ready and waiting for EURO 2012 to kick off tonight. (image: MOs810 via wikimedia)

Cześć (or ‘hello’ for those with limited Polish) to football fans from around the globe and welcome to the 2012 European Championships!

It’s been four years in the making, but finally 16 of Europe’s finest nations will forget about the Eurozone (sorry guys) and will take to the field for the next month to fight for the Henri Delaunay trophy. Form guides will be cast out of the nearest available windows, pubs brace for an influx of depressed Englishmen, and neighbors ready to be woken at obscene hours in the morning by cries of sheer agony and ecstasy.

Ah yes, I can sense the endless pounding of coffees and decreased work productivity already.

But what can we expect to see this time around?

The endless list of opinions on the internet generally seem to be pointing in the direction of the Spanish, the Germans and the Dutch. Given current form, it’s hard to go against the grain. The French will like to think that they are capable of getting the job done as well – they come into the championship on the back of a 20 game unbeaten-streak.

While all of that will unfold in the coming days and weeks,  let’s turn our attention to the inhabitants of Group A (Poland, Greece, Czech Republic and Russia) who will get us started tonight.

MUST-SEE: If you are still struggling to get into the mood for EURO 2012 then look no further than this ad from Nike. Just like the one they released in 2010 for the World Cup, it’s slick, star-studded and features heaps of awesome tricks to get you well and truly pumped.

EYE-BROW RAISER: Not to be outdone by the Germans, Poland has come up with its own answer to Paul the Octopus; a psychic elephant called Citta. According to her Zoo keeper in Warsaw, the fortune-teller position was hugely competitive – with Citta having to prove her clairvoyant-worth against a donkey, a parrot and another elephant. She got the gig after she correctly predicted that Chelsea would win the Champions League last month, by choosing an apple above a blue-and-white logo for Chelsea rather one from opponent Bayern Munich, which sports a red, white and blue logo.

BALOTELLI WATCH: The competition hasn’t even started yet but that hasn’t stopped Mario Balotelli from already being in the headlines. Due to racism concerns in Ukraine, Super Mario announced a few days ago that if he was racially abused at any point in the championship he would just walk off the pitch. UEFA President Michael Platini has since told him that he will get a yellow card if he does this.

REASONS TO WATCH: It’s the first game of the tournament and everyone will be going nuts! There should be a rocking atmosphere and at the very least you’ll see some cool fire works in the opening ceremony.

REASONS TO NOT WATCH: Roger Federer is playing Novak Djokovic in the semi-finals of the French Open; who doesn’t love a bit of the Fed Express?

TONIGHT: Hosts Poland get the party started in Warsaw when they take on the Greeks. The home team will be desperate for a good result to give the fans something to cheer about, but don’t expect too many goals as Greece are the masters of defence. Poland should come flying out of the blocks though, and its partisan crowd will get them over the line (2-0).

The other game sees two sides who have had a tough time in recent major tournaments; Russia and the Czech Republic. It should be a tight game, but with the Czechs potentially lacking striker Milan Baros they could struggle for goals. Russia to get the win with their superior attacking options (2-1).

Tom Midwood is a second year Bachelor of Sport Journalism student at La Trobe University, and part of upstart’s EURO 2012 team. You can follow him on Twitter: @Tom_Midwood.