“I look out at the crowd sometimes and think 'why is there a f***ing cock-forest out here?'" 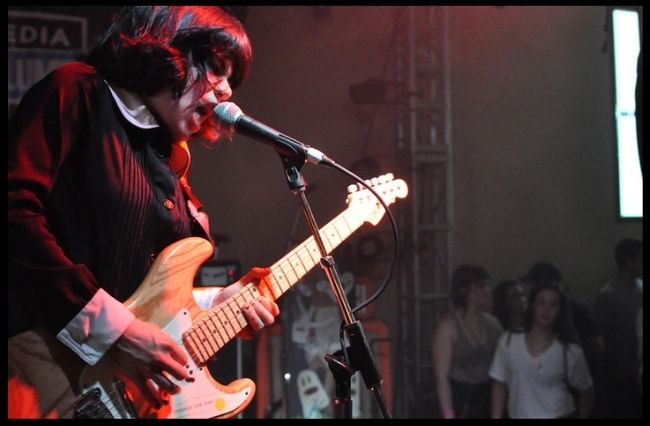 “Shimmering indie Americana”, “angsty dissonance”, “utterly infectious”, “abrasive and powerful” are just a few of the terms used to describe the music being produced by women in the Victorian music scene, a scene that female identifying artists are currently dominating.

A quick glance at the 2020 Music Victoria Award (MVA) winners list shows that all seven publicly voted awards were won by either female acts or bands that are fronted by female musicians.

They span a wide array of genres too, R’n’B act Sampa the Great dominated the most recent MVA awards, winning Album of the Year, along with Best Artist, Best Song and Best R’n’B act. Tracy McNeil and the Goodlife won Best Country Album for the second time. And punk rock outfit Cable Ties picked up Best Rock/Best Punk album, fronted by the angsty vocals of Jenny McKenchie and backed up by the raw drums of Shauna Doyle.

“It’s really wonderful to walk into this scene in Melbourne and … look at all these wonderful women playing music around me,” Doyle tells upstart.

This sentiment was shared by Pinch Points band members Issy and Acacia, winners of Breakout Act at the most recent MVA awards. They say their own music is constantly inspired by the talented female artists they’re surrounded by.

“We definitely feel incredibly grateful to be part of such an eclectic and inspiring music community here in Naarm-so-called Melbourne,” the band members told upstart via e-mail. “It’s a constant source of inspiration for our own music and creativity.”

The big question is though, are women in music getting stronger or are Melbournians just beginning to see equal representation in an industry that has always largely been dominated by males? Lead singer/songwriter of blues and country act Tracy McNeil and the Goodlife believes an increase in opportunities for women in the music industry has helped women rise in popularity in the Melbourne music scene.

“I don’t know if it’s a chicken or the egg type thing. I think there has been a bit of backlash in recent years at how unrepresented females have been across the industry,” Tracy McNeil tells upstart.

“So, you cannot be what you cannot see, and I think the light is finally shining on female identifying artists, and therefore they are given platforms to be seen and to have a voice.”

As uplifting as it is to see these great female acts and artists receive the recognition that they deserve at the recent MVAs, some say there is still a long way to go in the music industry to really achieve the desired levels of equality when it comes time to write the cheques. According to Shauna Doyle, festival line-ups and venue backers are still lagging a long way behind when it comes to providing an equal platform for female identifying artists.

“There is still a bit of pushback from things like bookers and the old school types in the music industry, especially those that have been doing it for a long time,” she says. “Booking festivals, decisions on music industry funding and things like that still doesn’t provide enough transparency.”

McNeil recognises the same problems with festival bookings and funding, but also believes that women aren’t always respected once they hit the stage.

“Female artists are still getting cat-called to take their clothes off on stage, even those that don’t project themselves in that way at all,” she says. “It sometimes seems like two steps forward to one step back, but we’re slowly shuffling our way through a cultural shift.”

Drummer Shauna Doyle believes that it is up to bookers to lift their game before more women and gender diverse people will break out in the music industry, which also affects the punters that are seen attending festivals and gigs.

“It’s not on [bookers] radars at all to think about diversity in booking. The outcome of this means young women and gender diverse people are going to these festivals and not seeing anyone like themselves on stage,” she says. “If the performers on stage are reflecting who you are, then you are going to feel more comfortable about going to these shows.”

“I look out at the crowd sometimes and think ‘why is there a f***ing cock-forest out here?’, where are the women that want to come to these shows?”

McNeil says there still a long way to go in achieving equality in the music industry, not just in Victoria but right across the globe. But the most recent MVAs and the dominance of female artists on the night is a great sign that change is slowly occurring.

“We just have to keep in mind that there is still a lot of work to do. But it is great that it is shifting, and that we are seeing women absolutely killing it at the moment, because they really are,” she says.

Photo: Screaming Females by Jason Persse available HERE and used under creative commons attribution. This image has not been modified.