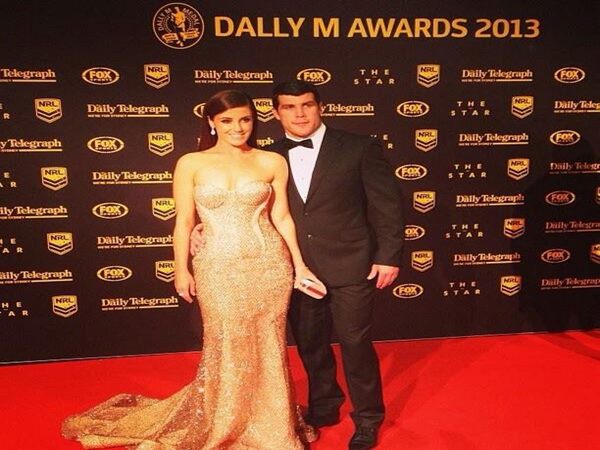 Last night the glitz and glamour of the Dally M awards lit up the Rugby League world.

This year saw the awards moved to grand final week, and the pressure to perform in the both the football and fashion stakes couldn’t be higher for players and their wives and girlfriends.

But to every great man there is a great woman and that woman must be (so it seems) dressed by Steven Khalil.

The Sydney based fashion designer dominated the ruby coloured Dally M runway dressing five wags, ranging from the one and only Terry Biviano to Sally Inglis and Simone Ennis.

There were some hits and misses but since we’re a cheerful bunch here at upstart we’ll just focus on the jaw dropping knock outs with their dangerously low necklines.

She’s the Rebecca Judd of the NRL world and the original WAG from the hit series WAG nation. Terry Biviano was the “ying” to her Sydney Roosters husband Anthony ‘Mini’ Minichiello’s”‘yang”, with the couple perfectly complimenting each other in all black and white ensembles. Biviano was a vision in a Steven Khalil white long sleeve gown customised to fit her eight month baby belly. The dress featured a high-cut neckline, thigh split and a sexy cut out detail at the back. White mesh panels were contoured around Terry’s baby bump, accentuating the natural curves of her body. It was a show stopping look, utter perfection from everyone’s favourite NRL WAG.

Sally Inglis, the wife of South Sydney superstar Greg Inglis, wowed on the ruby carpet in another Steven Khalil gold masterpiece. It was a three quarter length, off the shoulder, gold sequin gown with a cluster of silver sequins at the waist. The intricate silver detail was ever so subtle and broke up the mass of gold, elongating Inglis’s small frame. She was simply oozing shimmery sexiness.

Joelle Hadjia, the partner of giant Souths forward Sam Burgess, stepped out in a daring, black lace jump suit number, deviating from the typical floor length gown. The fit, along with the intricate detail on the sleeves and neckline, was impeccable. The strategically placed appliqués also revealed just enough cleavage to make the outfit tastefully sexy.

The drop earrings were stunning and the soft curls styled to the side were well suited to the outfit. If I were to fault one element of her outfit it would be the black point shoes. The pants were not cropped at the ankle and flowed down to the middle of her foot, making her look short.

Tessa James, the wife of Gold Coast Titan Nate Myles, also wore a black jump suit like Joelle Hadjia. Unlike Hadjia’s Steven Khalil suit, James went for an ultra sexy plunging neckline by Balmain, with Dolce and Gabbana drop earrings and a turquoise clutch. It was a very serious look for the 22-year-old but was none the less a sleek and chic look for the night.

She isn’t a WAG, but Mauboy knocked it out of the park this year. Her beautiful complexion coupled with a pastel pink straight cut Alex Perry gown was just exceptional. But just when I thought it couldn’t get any better, the back of the dress was covered in bright orange lace with delicate, dainty flowers. Flawless make-up, slicked back dead straight hair and nude Christian Louboutin’s completed the look.

Reminscent of Cate Blanchett, Elle Watmough was the epitome of class and sophistication in a pale blue dress by – you guessed it – Steven Khalil. Wife of Manly Sea Eagle Anthony Watmough, her dress was covered in delicate rosettes from head to toe and featured a plunging V neck line with a thin cream ribbon waist band. A soft up do and pale blue drop earrings perfected the look and the black nails added a little toughness to this otherwise romantic outfit.

Simone Ennis, wife of Canterbury Bulldogs star Michael Ennis, stole the red carpet. Her gold strapless mermaid style Steven Khalil gown was absolutely breathtaking. The boning in the dress accentuated her hour glass curves and the train added an element of avant garde that you’d expect to see at the Emmys or the Oscars. The gold netting in the dress reflected against the camera lights and dazzled on the carpet. It was exceptional.

Chelsea Cormack, the partner of Sydney Roosters forward Jared Waerea-Hargreaves, deserved a mention for her simple peach coloured skin tight gown. The Alex Perry gown was similar to Jess Mauboy’s dress except with a more structured strapless bodice. Elegant silver jewellery and an off to the side curly hair do – which was very popular on the carpet this year, complimented the overall simplicity of the look.

The four Burgess brothers from the South Sydney Rabbitohs chaperoned their mother, Julie Burgess, the new first lady of Rugby League, down the ruby carpet. Wearing a half black, half white one shoulder number, Burgess showed off her amazing custom dress and the figure that went along with it. She was sleek, elegant, age appropriate and matched perfectly with her dashing sons.

How good do Mick & Simone Ennis look at tonight’s #DallyM Awards!? Who do u guys think will take home the big prize? pic.twitter.com/XEaKqqK5z5