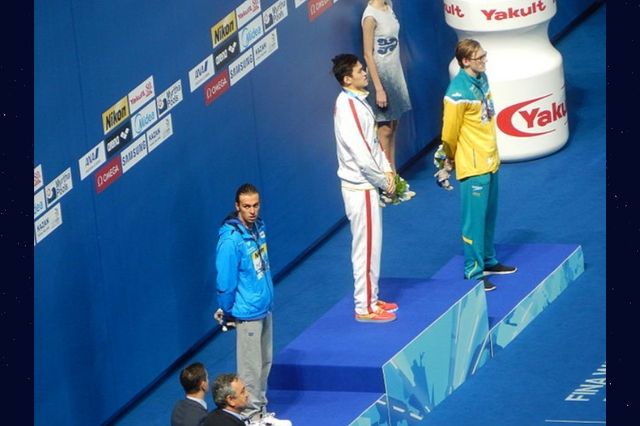 Stand up for what you believe in. A phrase that millions of people live by every day, fuelled from good intentions and courage. It seems straightforward. But what if you had the right intentions, you stood up for what you believed was fair and yet somehow you may have done the wrong thing. That’s the conundrum that Australian Olympic swimmer Mack Horton has had to face since protesting against doping in sport at the World Aquatics Championships last July.

When Horton chose not to share the podium with China’s Sun Yang it sent a strong message to the swimming world. It said he wouldn’t tolerate athletes who have been associated with doping.

Sun was suspended from swimming for three months in 2014 after taking a prohibited substance for an ongoing heart condition.

He was then under investigation for an incident that occurred during a scheduled doping test in 2018, where he refused to give samples as there were questions regarding the authorisation of those taking the test.

Sun was eventually cleared, allowing him to compete in the championships. But the World Anti-Doping Agency (WADA) is appealing the decision and Horton told Channel Seven’s Sunday Night program that’s why he was frustrated.

“There are those that would argue he could have made a protest in a different way without upsetting the medal ceremony, but it certainly got the attention that he was hoping for so you would have to say he was pretty brave and courageous for what he did,” he told upstart.

Horton’s actions had many Australians feeling proud to call him one of their own. Former Olympian Sally Pearson was quick to say she stood behind his protest.

If only Horton knew what was happening behind closed doors at Swimming Australia. The governing body knew that fellow Australian swimmer Shayna Jack had tested positive to a prohibited substance before the championships began. But there was nothing Swimming Australia could do as only Jack or the Australian Sports Anti-Doping Authority (ASADA) had the right to release the news.

“It’s a classic catch 22 isn’t it? That somebody thinks they’re doing the right thing for the broader good of the team and themselves and it backfires on them,” Professor Shilbury said.

Horton told Sunday Night that “nothing changes” if Jack’s positive test had been released before the championships.

But Professor Shilbury has his doubts over that strong stand.

“I can’t believe he would have taken the action that he took [protesting Sun Yang], as it’s proven to be the case it would cause more harm to the team than perhaps the protest itself.”

Horton also said on Sunday Night that he felt like nobody was doing anything about doping in sport which is why he had to take a public stand.

“By the time a substance has been prohibited and a reliable test developed by the anti-doping industry, the doping industry has already moved on,” he told upstart.

“The only people caught by the new test are usually those who are fairly unsophisticated in their drug use or too poor to access the latest suite of drugs.”

Dr Mazanov says figuring out how to evaluate anti-doping as a public policy is both time consuming and expensive.

“At this point, governments have to figure out whether anti-doping is important enough to divert money away from other public policy programs,” he said.

“I have always wondered whether people going to a football game would be willing to pay a $5 tax to fund anti-doping policy evaluation, I’m guessing it would be unpopular.”

According to Dr Mazanov the proportion of positive drug tests recorded by the World Anti-Doping Agency (WADA) has been stable at about 1-2 percent throughout its history.

This consistency could mean that WADA’s long term strategies remain unaffected by protests around the world.

The last time someone made a major protest against doping was Paula Radcliffe in 2001. The British marathon runner was unhappy that Russian athlete Olga Yegorova was allowed to compete at the World Athletics Championships.

Yegorova had tested positive to performance enhancing drug erythropoietin [EPO], but she was allowed to compete because of a testing technicality. This prompted Radcliffe to hold a sign in the competition stadium reading “EPO cheats out” but the protest was fruitless and Yegorova went on to win the 5,000m race.

Performance enhancing drugs are always going to be a controversial topic in the sporting world.

“Whilst ideologically it must seem like the right thing to do, to protest [against dopers] the reality in sport is you don’t comment or take action on the misfortunes of others, in other clubs or countries,” Professor Shilbury said.

“You do so at the risk of causing problems to your own team.”

Unfortunately for Horton and Swimming Australia that’s exactly what happened.

Professor Shilbury advises athletes to take their future protests through official channels rather than a public approach.

“There’s so many uncertain things that happen in sport or on the field that you don’t envisage or predict,” he said.

Photo: Kazan 2015 – Victory Ceremony 800m freestyle by Oleg Bkhambri available HERE and used under a Creative Commons Attribution. The image has not been modified.