The war of words between Apple and Adobe over Adobe’s Flash technology—which enables high quality animation and movies to be played over on networked devices—has hit Melbourne’s streets, with culture jammers targetting Apple’s tram shelter ads.

The tram stop shelter at the corner of Elizabeth and La Trobe Streets in Melbourne’s CBD has been defaced with images of blue Lego-like building blocks adorned with question marks plastered on to the face of the iPad. 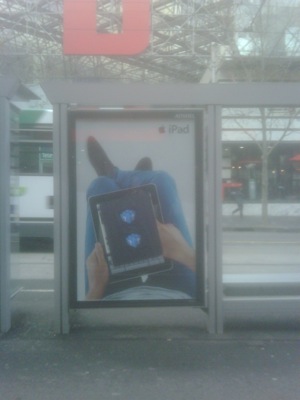 The site of battle: Corner of Elizabeth and La Trobe Streets, Melbourne

The picture of the blue blocks is identical to the placeholder image displayed by Apple’s mobile devices in place of Flash content. Apple mobile devices—namely the iPad, iPhone and iPod Touch—do not currently support the Flash player which is made by Adobe. 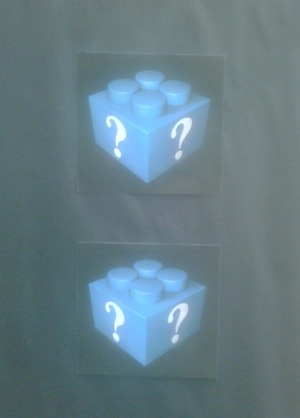 Defaced: The blue blocks that Apple devices display in place of Flash content

The long-simmering fight between Apple and Adobe came to a head in April 2010 when Apple CEO Steve Jobs posted a letter on the company’s website explaining why they do not permit Flash content on their mobile devices.

In his post, titled ‘Thoughts on Flash’, Jobs outlined a number of criticisms of Flash, including technical and peformance issues to Flash’s alleged lack of compliance with open web standards.

In their reply, ‘Our thoughts on open markets’, Adobe co-founders and chairmen Chuck Geschke and John Warnock claimed that it should be up to consumers should to decide Flash’s fate.

Christopher Scanlon teaches journalism at La Trobe University and is a co-founded or upstart.