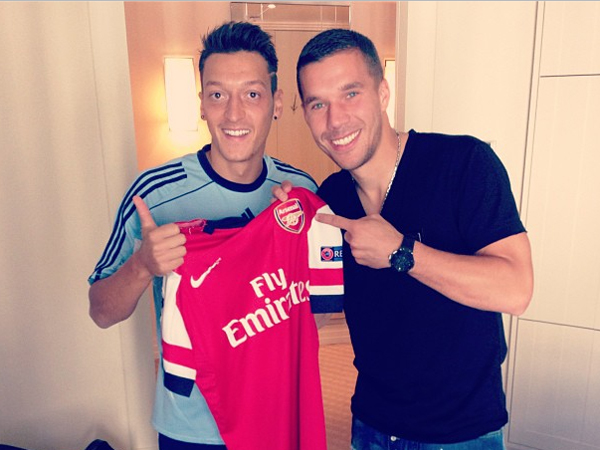 With pressure mounting from fans, and a hefty sum of money sitting in the bank, Arsene Wenger had to make a move before the transfer window closed yesterday morning.

But no one expected a transfer this big from the Gunners.

In fact, it’s the third largest signing in the history of the Barclays Premier League. Not bad from a man who has established a reputation as being excessively frugal.

Though Wenger had been adamant, throughout the summer, that Arsenal would not overpay for players, yesterday’s transfer was a great move – in Ozil he has brought a world-class player to the Emirates.

The young German has provided three consistent seasons for Los Biancos – leading the La Liga in assists for the past two years, playing alongside Karim Benzema and Cristiano Ronaldo.

Still only 24, Ozil has also maintained a starting role in the German national team, where he burst onto the scene following his performance at the 2010 World Cup.

“We are extremely pleased to have signed Mesut Ozil,” said Wenger, following the announcement.

“He is a great player, with proven quality at both club and international level. We have watched and admired him for some time as he has all the attributes I look for in an Arsenal player.”

Ozil’s focus on slick passing and team-play will go down a treat with Wenger’s team plan, while his knack for scoring much-needed goals will certainly be appreciated too.

And though Arsenal has no shortage of midfield talent already, Ozil’s arrival provides some much needed relief and depth to a squad currently crippled by injuries.

Mikel Arteta and Lukas Podolski have remained on the sidelines throughout the opening weeks of the season, and key midfielders Aaron Ramsey and Jack Wilshere have been plagued by injury throughout their brief careers.

While Ozil will undoubtedly make huge waves on the field, the signing could have an even bigger impact on Arsenal’s near future as a whole.

“This is an exciting day for all of us. We have signed a world-class player, who is one of Europe’s brightest young talents,” said club CEO Stan Gazidis.

“Like all of us, [Stan Kroenke, owner] wants to see Arsenal winning titles and trophies… We will continue to work towards that goal and look forward to an exciting season.”

With such a massive signing, Wenger sent a statement to the rest of the world – Arsenal is definitely still a top flight club.

Despite consistent Champions League football, the Gunners’ reputation as one of Europe’s finest clubs has diminished in the last few years.

Losing the likes of Gael Clichy, Cesc Fabregas and Samir Nasri didn’t help Arsenal establish its case, as a club top-flight players wanted to stay at.

A near empty trophy cabinet, since its move to the Emirates, is testament to that.

It seems like an eternity since it was a true contender to win the league, while last season it went down to the wire to secure a place in the Champions League, over north-London rival Tottenham.

Months of negotiations, with the like of Luis Suarez and Gonzalo Higuain, proved fruitless. The fact that the latter opted to move to Napoli highlighted just how far Arsenal’s reputation had sunk.

Signing Ozil was a mark of ambition by Wenger and the club, a sign that Arsenal needs to be taken seriously, both by its competitors at home and by clubs abroad.

Is Ozil the player Arsenal needed? In a team already packed with midfield talent, it’s doubtful.

Despite a promising start to the season Olivier Giroud is yet to earn himself the reputation as a world-class player.

What the Gunners really needed was a forward to replace Robin van Persie, after his move to rival Manchester United. Whether Giroud can deliver in the top flight might make or break the club this year – and Wenger’s career.

But still, it’s a good start.

And if a top striker ever considers moving to Arsenal in the future, seeing Mesut Ozil on the team sheet might be what gets his signature on the dotted line.

Jesse Setaro is a staff writer for upstart and is currently completing a Bachelor of Journalism at La Trobe University. You can follow him on Twitter: @JSetaro