‘A democracy is only as strong or as weak as the participants in the process choose to make it,’ says Ghanaian barrister and politician Hannah Tetteh in An African Election.

The film documents the struggles of the West African nation of Ghana, as it battles to conduct a legitimate, honest and democratic election. It premiered in Australia on Saturday at ACMI, as part of the Human Rights Arts and Film Festival.

Director Jarrath Merz followed Ghana’s presidential candidates for almost three months; documenting the political processes of a third world nation where 27% of the population lives on less than $1.25 per day, and democratic elections have only been held since 1996. The film depicts the atmosphere in Ghana as ever tense, with electoral campaigns overshadowed by a pervasive anxiety that at any moment, an eruption of violence could shatter all hope of a peaceful election.

Yet the film’s portrayal of the passion and intensity of the citizens of Ghana is nothing short of arresting and humbling. In dusty polling stations they await their opportunity to participate in the political process, cueing for up to 12 hours; their enthusiasm stubbornly refusing to wane. As the campaigns roll on, they take to the streets, dancing and chanting; calling for peace, for transparency in the electoral process, and for a sustainable future for their beloved Ghana.

The Human Rights Arts and Film Festival describes its mission as, ‘to provide a shared site whereby artists, human rights organisations and the Australian public are united in their desire to contribute to social change.’ 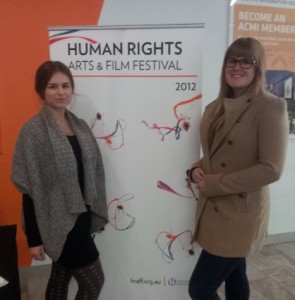 Indeed, it would seem the film provoked some of those in attendance to reflect upon social issues closer to home: their own engagement with the Australian electoral process.

Melbourne University student Bianca Kerr went into the screening with doubts about the integrity and motivations of the festival.

‘To be honest, I was originally sceptical of the idea of the Human Rights Arts & Film Festival. I was afraid that it would trivialise or commoditise the struggling and suffering of nations and individuals by offering it as entertainment.’

However her reservations were eased by the films depiction of the resilience and strength of the Ghanaian people.

‘The film offered such fierce intensity. The Ghanaian’s passion and desire for a government elected through free and open democratic elections was electric. I was really captured, inspired and connected to the film emotionally. I walked away knowing that I really undervalue democracy in Australia.’

She might just have a point. As Australian’s we are provided with ample opportunity to exercise our democratic rights, yet when election time comes around, many of us bemoan our legal obligation to participate in the process. In 2010 5.46% of voters delivered an informal vote, and according to the Australian Electoral Commission, an estimated 1.5 million eligible Australians are currently not enrolled to vote. That’s the equivalent of an extra fifteen electorates or a state the size of Western Australia.

If Hannah Tetteh is right, and a democracy is only as good we choose to make it, then what does that bode for the future of Australia?

2012 is the Australian Electoral Commission’s ‘Year of Enrolment’ celebrating 100 years since the right and responsibility to enrol became enshrined in our law and 50 years since all Indigenous Australians became entitled to vote in federal elections. It also seeks to ensure that all Australian’s have the opportunity to exercise their democratic rights by encouraging enrolment.

Yet with no shortage of pre-existing campaigns such as ActNow and Triple J’s Rock Enrol already encouraging Australians to participate in the electoral process, is another campaign really what is needed to win over our reluctant voters?

If there is any lesson to be taken by Australians from An African Election, it is that when we wholeheartedly engage with the democratic process, we provide a pathway to better ourselves and the future of our nation. Similarly, when we complacently undervalue the process, we threaten to erode and undermine it.

As The New York Times recently noted, ‘[The] Ghanaians may be relatively new to the machinations of democracy, but they’re fast learners.’ Fast learners with passionate hearts and minds; craving political and social justice, the electorate of Ghana recognise their best chance to shape their nation is through active engagement in the political process.

Beside such vibrant idealism, the Australian culture of dispassion and disengagement is simply embarrassing.

Are you one of the 1.5 million eligible Australian’s not currently enrolled to vote? Why not enrol online? It’s simple, just head to the AEC’s enrolment page.