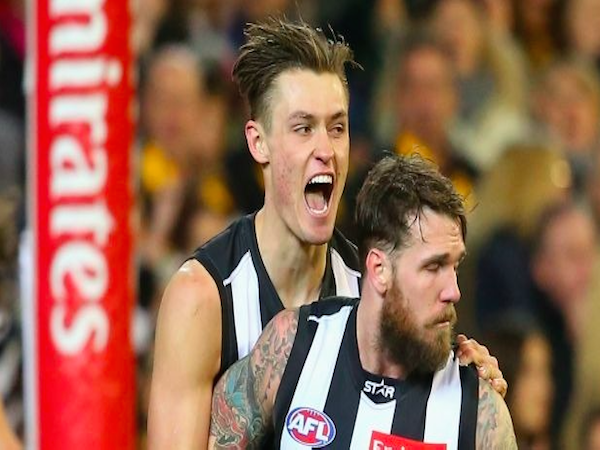 If you looked at where the Pies were sitting five weeks ago, it’d be hard not to place them as genuine top four contenders.

Positioned comfortably at fourth place on the ladder after their win against Greater Western Sydney, even the harshest analysts were singing praise for the Pies. This praise continued after their nail-biting loss to Hawthorn.

Now, after five straight loses — the most since 2005 — it’s hard to be optimistic about the rest of their season. Collingwood is now 11th on the ladder, exactly where they finished at the end of the 2014 season.

The close losses to top sides Hawthorn and Fremantle were frustrating for the team, but gave players and supporters alike hope that Collingwood could still be finals contenders.

These initial close defeats received praise from critics. The Roar said Collingwood “firmed as a genuine finals contender” and afl.com.au said they “appear capable of challenging the competition’s best teams in September”.

Fast-forward to round 18, and these narrow losses are becoming comfortable victories for the opposition.

In the press conference after last Sunday’s 18-point loss to the Bulldogs, coach Nathan Buckley said the team are making silly errors and not getting enough from their smalls.

“When the game was on the line halfway through the last quarter, we just made simple errors either with our ball use or with our defensive positioning or we lose a critical contest,” Buckley said.

The Herald Sun’s Jay Clark predicts Collingwood won’t make the eight and their position on the ladder won’t change.

“The damage might have been done losing the past five,” he said. “Travis Cloke’s return will help bolster the side in time for the Sydney game, but the forward line needs work.”

With Cloke sidelined, newcomers like Darcy Moore have stepped up to secure goals for the Pies. Moore kicked five against the Bulldogs last weekend.

upstart spoke with Lee Adamson, who played 96 games for Collingwood and helped bring the side to victory as a 1990 premiership assistant coach.

“If Darcy Moore comes on board, he’s probably the partial answer to a tall, mobile player down forward,” Adamson says.

“You can’t really just rely on Cloke. Even in a really good season, he’s only going to kick four or five goals in a week.”

Buckley believes the recent string of close losses — by seven, ten, three, 31 and 18 points respectively — can be attributed to playing some really good sides. The last five defeats, aside from Port Adelaide, were against top eight sides.

Adamson says the outcome of the game isn’t decided by missing a set shot at the end of a game, like Jesse White did in the final quarter of the match against Fremantle, but by missed opportunities throughout the game.

“A lot of set shots are missed which ends up costing them the game. It comes down to the calibre of the sides, there’s not one particular thing they’re doing wrong,” the Collingwood life-member says.

“They could have perhaps beaten Port Adelaide.”

Recent losses by the Pies have been labeled ‘honourable’, but it doesn’t change the fact that the Pies haven’t won a game since June. Adamson says a harsh critic would say there are no honourable loses.

The loss of Ben Reid has also affected the team.

“Ben Reid is absolutely a huge loss for Collingwood because he can play at either end,” says Adamson. “He’s mobile, 200cm and an All-Australian player.”

Unfortunately Reid’s career has been riddled with injury woes, as he has a high susceptibility to soft tissue injuries.

While it may be hard to get back on board for the finals, the next few weeks could raise the hopes of players and supporters alike. Travis Cloke has said he is hoping to return to the side in round 19.

The Pies have a mixed-run home, beginning with today’s match against Melbourne. They’ve only won five games this season and are struggling to hit the scoreboard, only scoring 46 against St Kilda last Sunday.

If Collingwood do lose this weekend, the pressure will be on Buckley to provide answers. Buckley has culturally transformed Collingwood, winning games in the second half of the season is next to be ticked off the checklist.

It is going to be a tough road to the finals, regardless of whether or not the Pies win today.