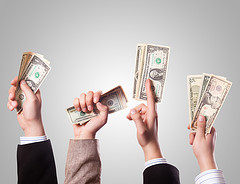 I like to think I am a charitable person. When I have cash to spare, I have been known to share it with a homeless person, put it in a collection plate at church or into the bucket held by a friendly volunteer.

I also volunteer when I can and when I am fit and well, I donate blood, I am also a registered organ donor. Given the preference, I would rather donate my time than my cash, but I am happy to give either. However, when I get a letter in the mail with a letter designed to induce guilt so that I open my wallet and give whatever is in it to a charity, I get more than a tad annoyed.

It isn’t fundraising efforts that I object to, it’s the number of places requesting my help and how they ask for it.

A two page letter detailing the bravery of a young child suffering from an illness and how difficult it is for them and their parents does a number of things. It does what it is partly designed to do – to break my heart a little and perhaps make me feel a little guilty for not having to go through the same pain.

Then I doubt that this is the intent, the letter makes me want to rip it up and never want to give to the charity it came from ever again. That might seem like an overreaction but I have my reasons.

First, I don’t like the suggestion that if I don’t support a cause then I don’t have a heart, and lack in basic human decency. A letter like that feels like a slap in the face, as if what I am already doing isn’t enough. Most of the time, I receive the letter in the mail because I am on that organisation’s mailing list. The only way that I can get on that mailing list is because I have had some sort of relationship with them previously – most likely by registering as a volunteer or by donating. I made that first step to help, and I most likely make continuing effort to help out. Granted, they likely need more cash, but if they were to try asking without making me feel like a horrible person, I will most likely be more willing to part with the little money I have as am unemployed student.

Second, and perhaps a reason that raises more of an issue, is the sheer number of places asking me for money.

A cursory glance over my youngest brother’s school newsletter shows that his school is holding five different fundraising campaigns, all for different causes. Yes, donation to these fundraisers is voluntary, but if you don’t donate you miss out on an activity, be it a disco or a casual clothes day. Primary school age children don’t like missing out and you’re not likely to want to make your child feel like an outsider, so you will undoubtedly give them money for each and every one of these fundraisers. The school’s fundraising efforts is indicative of the number of charities there are out there and how many want our money.

The most recent taxation statistics released by the Australian Taxation Office (ATO) suggest that as of October 2010 there were over 55,000 registered tax concession charities, 3,000 more than October 2008. The 2008 figure displayed a 2.1% increase from the previous year which suggests that the number of charities is on the rise. That’s more than 55,000 organisations registered in Australia alone, all of whom are likely to have their own fundraising efforts. How do you choose?

There are certainly charities that get more attention, that are almost ‘trendy’ to be associated with. They have their t-shirts, their hats, their car cleaning supplies, wristbands and fuzzy pens – think of a merchandising opportunity and it has probably been seized by a charity.

Should you avoid these because everyone knows about them? Surely we shouldn’t penalise a charity because they have a better marketing strategy, but where does that leave the lesser known charities? Their work is still important and they would undoubtedly benefit from our donations as well, but it is difficult to give to all the charities out there. Where does it end?

As a student, being low on extra funds is common. I try to give where I can because I know that ultimately, I am much better off than others. I also know that there are cures to diseases that won’t get any closer to being found without increased/continued funding into research.

The work of charities and not-for-profit organisations is often invaluable; they deserve money. However, at the end of the day, when there are literally thousands of places all tugging at my heart strings and my hip-pocket, it is easy to become disengaged and disenchanted.

So, when I don’t respond to your Facebook event inviting me to donate to your charity of choice or to support you in your fundraising activity, please don’t think that I don’t care – remember that you are not alone and there is only so much of my cash to go around.