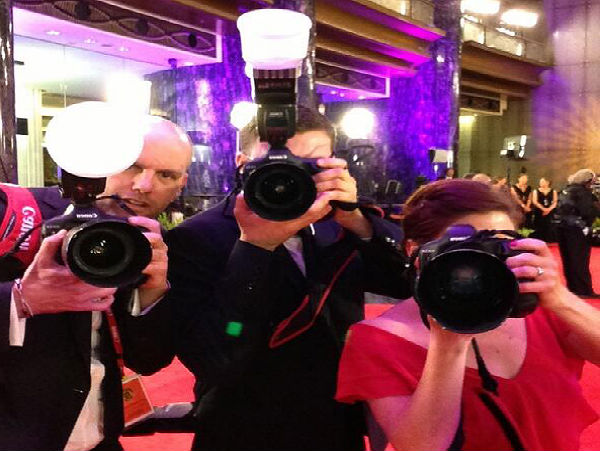 Melburnians often take pride in the city they live in, and while there are many reasons it remains the most liveable city in the world, it is the home to the game we all love.

Melbourne is arguably the sporting capital of the world, but this unique city also carries around the tag as the fashion capital of Australia.

Initially, the Brownlow night was all about the footballers and their achievements, until the year of 2004, when the cameras got a taste of Rebecca Judd’s low cut, cleavage showing silky red dress.

Ever since, the WAGs upped the ante, and over the years designer-wearing, head-to-toe pampered, model look- alike wives and girlfriends slowly but surely took over the media attention.

As brownlow host Hamish McLachlan said, ‘It’s not about football or the footballers.’

And finding out who wears the best dress is just as exhilarating and important as the winner of the medal.

So it comes as no surprise that families are glued to their televisions as they desperately wait to see their favourite AFL players show off their golden trophies.

After all on a night like this, what’s a footballer without a breath-taking woman by his side?

Take a look at upstart’s top 10 most eye catching gowns.

Alex Davis – Step aside Rebecca Judd there is a new Queen of the AFL WAGs. Wearing a Julie Simonali dress, this beauty was certainly a show stopper on the red carpet.  Davis’s style was very natural and simple.  With almost effortless hair and make-up, she successfully shifted the attention to that bandage dress and her model figure.

Jessie Habermann – There was a clear trend among the gowns last night. It seems that mermaid dresses were quite popular this year, as well as the long neckline as many of the favourite gowns featured these styles. And while it was very common, Marc Murphy’s stunner surely took her own spin on the style, as she stole the spotlight with her elegant Bonita Couture number.

Nadia Coppolino – Now this was something else. Coppolino’s dress was beyond amazing. Made to fit her stunning figure, she looked flawless on the red carpet.  This uniquely handcrafted gown certainly stood out of the crowd.

Belinda Riverso, with Adelaide’s Rory Sloane – Wow, what a dress, and what a body. It seems Rebecca Judd’s 2004 dress was an inspiration to many of the gowns the WAGs wore last night. Riverso looked absolutely stunning in her gorgeous blue dress.

Felicity Harley with Tom Harley – One vote goes to Tom Harley’s beautiful wife. She looked stunning in her green gown. Simple and classy.

Rebecca Judd – Wearing a J’Aton Couture creation, she is no doubt once again stealing the spotlight.Wearing red for the first time since her 2004 show stopper gown, the AFL WAG most certainly loves getting the attention – all of it. And she is not prepared on giving up her place in the spotlight anytime soon.

Brynne Edelsten – Brynne looked lovely, but very simple in her grey dress last night, which was quite disappointing. Each year we expect her to shock us with her outfit and that’s the reason we love her. This year, she has seriously tamed her imagination down and played it safe. I miss her sparkles!

@dangerfield32 and the beautiful Mardi Harwood looking amazing.Big thanks to the team @ArthurGalanAG for the threads pic.twitter.com/JJcYoY1522

Andrew and Simone arriving at the Brownlow Medal on the #SwisseRedCarpet pic.twitter.com/lC2APtkhPO

Simone Demetriou with AFL CEO Andrew Demetriou – Demetriou looked a million bucks last night.Wearing Giorgio Armani, she certainly looked her part as the Big boss’s wife. After more than a decade in the job, this was just another night at the office for the Demetrious.

Ivana Krsteska is a third year Bachelor of Journalism student at La Trobe and a staff writer for upstart. You can follow her on twitter: @Ivana_Krsteska