An unofficial marathon record has been set, but is this achievement something we should get used to? 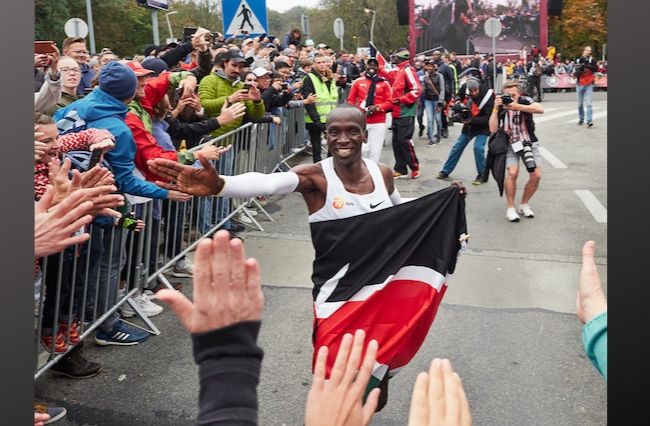 There used to be a time when breaking sporting records was rare. For a long time, running a 100m in under 9.7 seconds seemed impossible. As did a mile in under four minutes and a marathon in under two hours. But after Kenyan marathon runner Eliud Kipchoge broke the two-hour barrier in Vienna in October, we are now in a new era of sport where anything is possible.

There are records that still seem unbreakable, such as the women’s 100m sprint which Florence Griffith-Joyner has held since 1988. Even with the recent talent of the likes of Carmelita Jeter, Shelly-Ann Fraser-Pryce and a decade’s worth of talented female sprinters, it remains unbeaten. But these long-standing records are few and far between.

Kipchoge’s result joins a long list of marathon records set in the last five years, and it’s not the only sport that’s following that trend. Nine world records were broken at the World Swimming Championships in South Korea this year. This may seem normal now, but will there ever be a time when sporting records truly become impossible?

The evolution of sport science and technology has played a big role in improving athlete performance. Without it we wouldn’t have training methods tailored to build specific muscle groups and rehabilitation programs to help athletes recover from injuries.

Professor David Bishop from Victoria University’s Institute of Health and Sport believes that developments in sport science has allowed athletes to train their bodies more specifically for a certain sport or event.

“If you look back 20 or 30 years ago there probably wasn’t that much difference between a 100m runner and a marathon runner in terms of what they look like physically,” Bishop told upstart.

Although it may not look like it, Bishop says, it’s actually getting harder to break records. It has got to the point where there is little improvement left physiologically. However, he believes future athletes might still be able to find a competitive edge with the improvement of external things such as specialised equipment.

“Not that long ago they were running the 100m on cinder tracks and now you’ve got the scientifically designed track that has some spring, you’ve got the spikes as well,” he said.

“Now we have the new Nike shoes which have the metal plate in it which is supposed to return extra energy to the runner.”

What’s interesting is that there’s more than just technological improvements to help athletes perform. There’s also been developments in timing equipment which now allows for races to be recorded accurately to one-thousandth of a second. This precision has already shown its value in the 2018 Asian Games when, in the men’s 100m sprint final, Tosin Ogunode and Ryota Yamagata both finished with a time of 10.00 seconds. When new review technology was applied in the review, it was found that Ongunde finished the race 0.002 seconds ahead of Yamagata and that was the difference between a silver and bronze medal.

From an outside perspective, all of the scientific and technological advancements suggest that current athletes should be rewriting the history books. But this could be adding to the already existing pressure. Pushing yourself to the limit to achieve sporting success takes a significant toll on the mental state of an athlete and it’s already begun to cause problems.

In his search for premiership success at 22 years old, AFL footballer Adam Treloar moved from expansion club Greater Western Sydney to Collingwood at the end of 2015. At this point in his career it looked like the right step for the talented midfielder. But there’s nothing that can prepare an athlete to move from a club that had 13,480 members, to the biggest in the game with 75,037. There’s a lot more scrutiny from the media and greater expectations from fans to consistently perform. Treloar recently revealed that pressure was one of the reasons why he developed anxiety issues. While he was playing well for Collingwood, the mental battle was taking its toll and it got to the point in which he considered quitting the game in 2018.

Sport and performance psychologist Michael Inglis believes that it’s hard to prevent mental health issues like anxiety from growing because people aren’t comfortable talking about it before it gets serious.

“Unfortunately, our culture at the moment, particularly in team sports, is that people see it as a sign of weakness if you speak up too quickly,” Inglis told upstart.

During a nine-year study on student athletes and depression, the National Collegiate Athletic Association found that 35 out of 477 student athlete deaths were caused by suicide. This highlights how important it is for athletes to feel comfortable talking about their mental health, especially at a young age. It’s a well-known issue to the psychology industry and Inglis says it will be a key priority for years to come.

“We’re still learning how to be proactive about our psychology as opposed to reactive.”

As co-founder of The Mind Room, Inglis has worked with enough athletes to understand the importance of creating a mental preparation routine tailored for each individual athlete. Having said that there is still an overlap amongst all athletes.

“Most people are over-aroused before competition so generally they like calming and relaxation activities before events,” Inglis said.

Inglis thinks while there theoretically should be a point in which athletes can’t improve anymore, Kipchoge’s marathon time will only encourage more people to attempt to break records that seemed impossible.

“Now that someone has broken the two-hour marathon record it develops a belief within society that it’s possible,” he said.

“It has been so unattainable for so long but he [Kipchoge] will break down that psychological barrier for a lot of people now,” he said.

Even though a majority of sporting records have been set in recent times, there are still a handful that haven’t been touched for decades. Czech female sprinter Jarmila Kratochvílová holds the longest standing Olympic record as her 800m time has gone unbeaten for 36 years.

Sometimes an athlete just needs everything to go right like it did for Kratochvílová and Bishop believes that we might start see a longer time between records until that happens.

“You’re just going to need the right athlete, on the right day, with the right temperature, wind and humidity to break a record.”

Alex Morrison is a third-year Bachelor of Media and Communications (Sports Journalism) student at La Trobe University. You can follow him on Twitter @alexcjmorrison

Photo: Eliud Kipchoge by Michael Gubi available HERE and used under a Creative Commons Attribution. The image has not been modified.