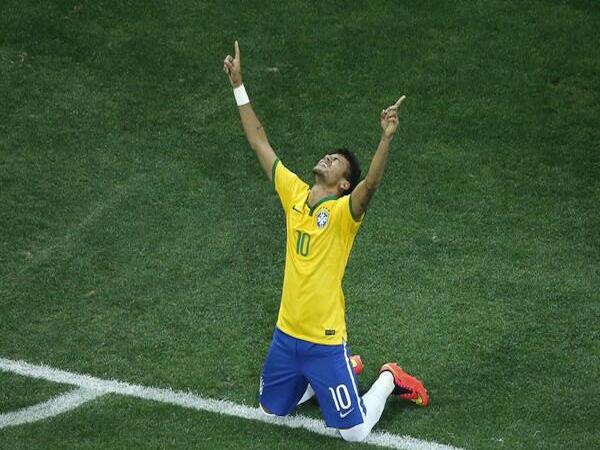 It had everything you expected – goals, controversy, Pitbull, samba flair and, of course, Neymar.

Once the formalities of the opening ceremony were concluded, the excitement became palpable in Sao Paulo and across the football-mad country of Brazil.

The national anthem was sung with gusto, enough to leave some Brazil players on the verge of tears as the all-encompassing sense of patriotism overwhelmed viewers across the globe.

Brazil’s incredible past and history within the World Cup, compounded by the endless heartbreak of 1950, equates to this tournament meaning more to A Selecao as a host nation than it ever has before.

FT: Neymar scores 2 goals as Brazil kick off the World Cup with a 3-1 victory over Croatia #BRAvsCRO pic.twitter.com/R4tFuoGu0M

So when Ivica Olic’s 11th-minute cross was diverted into the back of his own net by Marcelo, there was good reason the Arena Corinthians was left in stunned silence.

Brazil hit back with menace and Croatia, to their credit, effectively repelled an immediate burst. Niko Kovac had set his men up nicely and only something magical would penetrate their defence.

Unfortunately for the Croatians, Neymar proved he was capable of that magic. Turning out of trouble with relative ease, the Brazilian No.10 angled a pinpoint shot into the bottom corner from 25 yards.

Now the hosts were hitting their strides. Oscar was weaving in and out of traffic as if the ball was attached to him on a string, David Luiz was a rock in defence and Neymar was causing all of the headaches he was expected to in the lead-up to the tournament.

Brazil had found their rhythm.

Croatia were gallant, but 20 minutes from time controversy would strike in the form of Japanese referee Yuichi Nishimura.

Fred, a peripheral figure on the match for the entirety of the 90 minutes, would ultimately have the biggest say in deciding the outcome. Feeling the slightest of tugs from Croatian defender Dejan Lovren, the Brazilian striker went to ground and a penalty was awarded.

Croatia were rightfully livid and Kovac didn’t mince his words following the match.

“If that’s how we start the World Cup, we better give it up now and go home,” the Croatian boss said on full time.

Adding salt to the wounds, Neymar’s subsequent penalty should have been saved. A weak hand from Croatian goalkeeper Stipe Pletikosa allowed the spot-kick to creep into the top corner.

Oscar, arguably best on ground in a wonderful display, would add a third with a fantastic improvised finish from 20 yards. But the damage was done for Croatia.

The World Cup is underway.

Not a pen. Surrounded by 200 million who have a slightly different opinion. So will just go along with it… — Adam Peacock (@adampeacock3) June 12, 2014

“If that’s a penalty, we don’t need to play football anymore. Let’s play basketball instead.”

Neymar will take the plaudits for his brace, but it was Oscar who lit up the Arena Corinthians with a dazzling display. Sublime footwork, energy and industry out wide and a lovely goal to boot. And to think the 22-year-old’s place in the team was the most questioned in the lead-up to the opening game.

Australia kicks off their 2014 World Cup campaign when they host South American giants Chile in Cuiaba. It’s a new generation of Socceroos stars and retaining pride could be the order of the day, rather than making a significant impact on the tournament.

But prior to that, Spain take on the Netherlands at Salvador in a replay of the 2010 World Cup final. On that occasion, Spain secured their first ever World Cup triumph thanks to Andres Iniesta’s goal four minutes from time.

Mexico will also be looking to put a questionable lead-up to the World Cup behind them when they play African side Cameroon in Natal. Both teams have the opportunity to take advantage of Croatia’s defeat to Brazil and move into a commanding position in Group A.