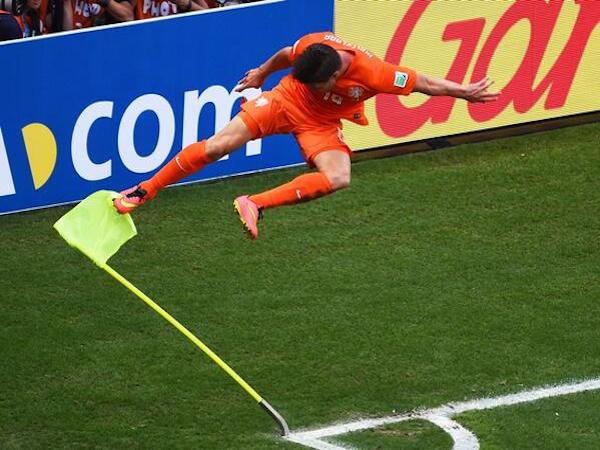 When will this World Cup have its first dull day?

You could be forgiven for thinking it might have come on Day 18, when 39-degree heat and 93% humidity met the Netherlands and Mexico for their round of 16 clash in Recife.

For 88 minutes, the conditions stifled what had been, up until that point of the competition, an exciting Dutch team. But then, within six minutes, things changed dramatically.

Wesley Sneijder volleyed home the equaliser. Arjen Robben was brought to the floor by Rafa Marquez inside the penalty area. Klaas Jan-Huntelaar nailed in the winner.

It was cruel on a gallant Mexico side. For long periods, they had outplayed their European counterparts. Miguel Herrera’s squad, who are based predominantly in the Americas, were used to the humidity and took advantage of the conditions.

They peppered the goal in the first half, asserting themselves as the dominant team and pressing a lethargic Netherlands outfit onto the back foot. But they had nothing to show for it until three minutes after the interval, when Giovani dos Santos angled a 25-yard drive into the bottom corner.

It forced the Netherlands to mix things up and the proactive Louis van Gaal obliged. In the midst of one of two cooling breaks, the Dutch manager made a tactical alteration that would give his side the upper hand once again.

He withdrew the ineffective Robin van Persie, shifted Dirk Kuyt into a central striking role and changed from a 3-5-2 to a more pragmatic 4-4-2 formation.

The positives were to be seen immediately and, had it not been for more heroics from Mexican ‘keeper Guillermo Ochoa, the Dutch might have levelled sooner.

Instead, they were forced to wait until two minutes from time, when a scrambled clearance fell to Sneijder on the edge of the area. He rifled a first-time volley into the bottom corner, sending the Oranje fans into raptures.

Just minutes later, deep into stoppage time, and the Netherlands would find a winner when Robben was clipped to the floor by Marquez. Although there was contact, it was minimal and questionable as to whether it had enough force to send the Dutch captain flying as he had.

But still, a penalty was awarded and Huntelaar, fresh from the bench, made no mistake from the spot. The Dutch were through to the quarter finals… just.

The drama for the day wasn’t done yet, as 10-man Costa Rica remarkably qualified for the quarter finals following a penalty shootout victory over Greece.

Bryan Ruiz saved the game from turning into a dour affair when his clever finish, placing the ball into the bottom corner from the edge of the area, gave Costa Rica the lead seven minutes after half time.

But the Central Americans would soon be dealt a blow when defender Oscar Duarte was dismissed for a second yellow card minutes later.

Greece were now in the ascendency and after monopolising possession and shooting opportunities, they finally found an equaliser deep into injury time. Centre back Sokratis Papastathopoulos was the unlikely source, opportunistically turning home a rebound after Theofanis Gekas’s initial shot was saved.

With Costa Rica tiring dramatically and Greece’s numerical advantage beginning to show throughout the allotted 30 minutes of extra time, Jorge Luis Pinto’s side did brilliantly to repel their opponents.

They had goalkeeper Keylor Navas to thank for some incredible saves throughout the extra time period, but he would soon become even more pivotal to their hopes.

Costa Rica dispatched their first four penalties in the subsequent shootout and Greece responded, until Gekas’s spot-kick was acrobatically kept out by Navas.

It was a stunning save and justly rewarded when Michael Umana kept his composure moments later to seal a 5-3 penalties win for the Costa Ricans.

The side who was given virtually no chance to progress from the ‘Group of Death’ that featured Italy, England and Uruguay are now through to the final eight.

This notion that ‘there was contact’ therefore it must be a pen is a growing nonsense. Contact doesn’t always = foul outside the box

“I have to apologise, in the first half I took a dive… But the one at the end was a penalty.”

“Robben dived three times. You should caution a guy who is trying to cheat and then if Robben did it again he would be sent off.”

Dutch manager Louis van Gaal is known for his versatility and he displayed it to its full extent against the Mexicans. He used three or four different formations during the match, with utility Dirk Kuyt played in a new role during each formation switch. Ultimately, it was the most simplistic – a 4-4-2 – that sparked the comeback.

After playing 120 minutes and cramping nearly every time he set off on a sprint, Costa Rica’s Joel Campbell deserves some recognition. When Costa Rica were reduced to 10 men, Campbell played as a lone striker and was the release ball for the Central Americans, chasing and hassling Greece’s defenders all night. He then slotted a penalty, despite severe cramp.

After making seven sensational stops, including a penalty save, Costa Rica’s Keylor Navas was the hero on Day 18. His effort in denying Theofanis Gekas in the shootout will be remembered, by it was his stunning reflex save to keep out Kostas Mitroglou deep into extra time that kept Costa Rica in the match.

The round of 16 continues with the tournament’s only remaining African sides both in action.

Nigeria comes up against the highly fancied France in Brasilia, looking to surprise once more in the nation’s capital.

Meanwhile Algeria, who are one of the stories of the World Cup, plays Germany in Porto Alegre.