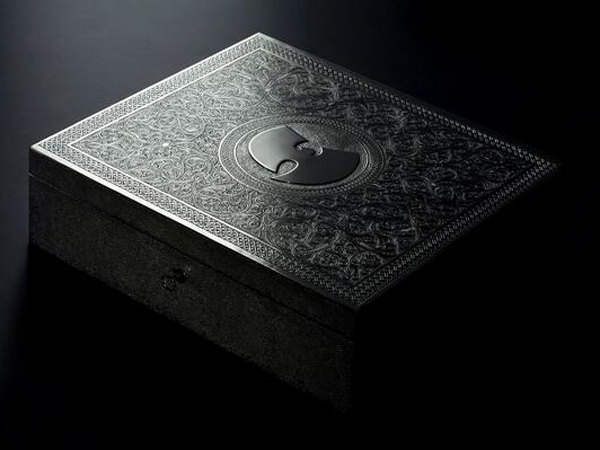 In a day and age where the mass production and digitalisation of music has become a social and cultural norm, it is refreshing to see that some haven’t completely abandoned their art form and given up on the industry.

Legendary hip-hop collective Wu-Tang Clan will shun what is the now-conventional sales-driven album promotion, in favour of a very different approach with their newest project, The Wu – Once Upon A Time in Shaolin.

Recorded over seven years and their first album since 2007’s 8 Diagrams, the new double length album will be “released” as just one single copy later this year, before being privately auctioned off to the highest bidder.

Somebody’s Already Willing To Pay A Few Million For That One Wu-Tang Album http://t.co/bj3MaY3e2S pic.twitter.com/s4F4VIgLi3

Prior to the auction however, the hand carved nickel-silver box in which the “album” is contained, will make a world tour of various galleries and venues for the public to enjoy, albeit under heavy security to ensure the album doesn’t leak.

The innovative release draws parallels to an issue from alternative rockers The Flaming Lips in 2011. The Lips released a very limited edition EP that was contained on a USB drive that was then further wrapped in a gummy candy resembling the shape of a skull.  The aptly titled Gummy Song Skull was sold for 150 USD each and has yet to be officially released on any other format. However the album was released on a digital format, seeing that the release could be easily distributed and circulated online.

While the idea is not completely new, the Wu-Tang Clan has undoubtedly taken it several steps further. The experiment ostensibly contests the current structure today’s music industry and the definition of art.

A statement released by the group on scluzay.com, a website produced specifically for the album, reiterated the group’s unhappiness with the state of the music industry: “[Today’s culture has] devalued both our experience of music and our ability to establish its value. Industrial production and digital reproduction have failed. The intrinsic value of music has been reduced to zero [while] contemporary art is worth millions by virtue of its exclusivity.”

Speaking about the impending release Wu-Tang member RZA reiterates the artistry of the project, claiming that the group are “about to put out a piece of art like nobody else has done in the history of music”.

The Wu-Tang Clan most certainly have a point. By producing just a single hard copy and ensuring that the album is not able to enter the public sphere, the group aims to protect the traditional definition of art and re-establish its links to the music industry, and for this they must be applauded.

But is this the best way to go about it? The album has many fans all over the world excited, although not everyone may be able to fully enjoy it. Those who live in remote areas or those who cannot attend the experience as it tours their local area may have their objections, as would those who can only enjoy music on the go in order to meet the demands of a busy lifestyle.

Whether the venture is deemed effective or not depends on a number of factors. While it has been reported that they have already been offered USD $5 million for the album, due to the message in which the project facilitates, it is unlikely that its success hinges on its monetary pull. You could even deem the experiment successful already by virtue of the fact that people are talking about it and recognizing the themes and arguments behind it.

Regardless, it would now definitely be harder to persuade someone that the music industry is completely dead. As bizarre as the idea might seem on the surface and despite the enormous amount of work awaiting the group, it is comforting to know that a handful of artists still care about the industry.

Evan Young is a journalism student at RMIT University.