Young voters discuss what issues matter to them most in the lead up to the federal election. 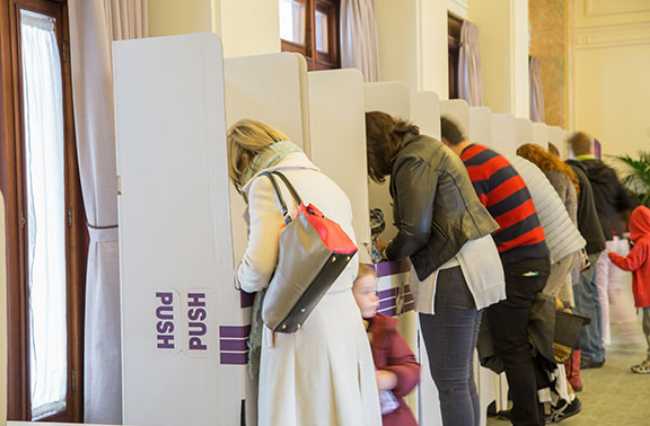 With the federal election fast approaching, many young Australians will head to the polls on May 21, tasked with voting for the very first time.

According to the Australian Electoral Commission (AEC), 96.8 percent of our population is currently registered to vote. But, 18–24-year-olds are the least represented, with the age bracket only accounting for 25 percent of the total amount of people enrolled, while people aged above 55 make up 40 percent.

Many first-time voters, like 19-year-old Emily Chang, are broadening their knowledge before the election to ensure they’re voting for a candidate that shares the same values and beliefs. Chang has been enrolled to vote since she turned 18 and is excited to cast her ballot alongside other Australians on Saturday.

“My school principal actually made us all register on [the] AEC in Year 12 so we were ready for the next election,” she tells upstart.

“I voted in a local election last year, but I did it online because of Covid so I hope I get my first democracy sausage in the federal election!”

Social media is also helping young people to stay politically informed, and political parties and candidates are starting to appeal to younger voters by developing an online presence on social media. Political parties like Labor, Liberal and the Greens are rapidly rising on TikTok.

The Labor Party have generated a strong following on the platform, accumulating over 77,000 followers. Similarly, the Greens have over 17,000 followers, and their secondary account for the Young Greens has over 13,000. The Liberal Party only has 2000 followers, but still receives high engagement on their posts from their young supporters.

Many new voters engage with content posted by political parties online because social media sites are an easy way to retrieve information quickly.

“I follow news accounts on my social media including the ABC, Sydney Morning Herald, Guardian Australia, The Conversation and The Daily Australia. Matilda Boseley from The Guardian makes great TikToks about voting and issues at the forefront of the Federal election,” Chang says.

“I engage with politics through social media, the news occasionally, and learning about at school,” 18-year-old student, Louis Miller says.

The annual Mission Australia youth survey last year found that of the 20,000 participants surveyed, the biggest issues identified were COVID-19,  the environment and equity and discrimination.

Since Morrison won the election for the Coalition back in 2019, the country has been rocked by significant environmental disasters, including the Black Summer bushfires, the flood crisis that’s hit Queensland and New South Wales, as well as the pandemic. The current government has been heavily criticised for their handling of all three. Chang shares this belief.

“The major crises during the last three years were and continued to be handled poorly,” she says.

“As a law student, it was devastating to see the price increase for mainly humanities degrees. The government continues to do nothing about climate change and Australia remains lagging behind the world.”

This opens the door for other parties with the youth vote. Findings from the Australian Electoral Study (AES) conducted after the 2019 Federal election show that younger people are moving further away from the two major political parties. The results suggest a divide between younger and older voters, with the 2019 election showing the lowest Liberal Party vote for those aged under 35 at 23 percent, while the Greens obtained the highest percentage of votes recorded for that age group at 28.

Leader of the Greens Party, Adam Bandt has been specifically targeting young voters in this year’s election campaign. In his address at the Social Awareness Forum on May 9, he called on a youth “uprising” as early votes open.

“You’re going to be told by older generations that you’ve never had it good, and that you’re all too sensitive,” he says.

“Young people are poorer and face a more dangerous future than at any time in nearly 100 years. That’s why we now have to fight for the future.”

In a poll conducted by the Australian Conservation Foundation in 2021, they found that 65 percent of voters say that Labor and the Coalition plans for climate action will influence their vote in the election. The study also found that one in two Australians aged between 18-24 were worried about the impact of climate change in Australia.

Kendra Harris, who is situated in the Wentworth electorate, says that environmental factors such as climate change and the 2019 bushfires are some of the main reasons she is looking for change this election.

“I don’t think they’ve [the current government] done a very good job the past few years, especially with the bushfires and Covid, as well as their approach to climate change…it’s all been really frustrating to watch,” she tells upstart.

Harris says that she knows little about opposition leader Anthony Albanese and has only heard of recent events about him.

“I honestly don’t know too much about Anthony Albanese, other than the recent drama with him not knowing the cash rate and unemployment rate.”

In the second debate held on May 8, when both Morrison and Albanese were asked what they planned to do to help youth, they avoided climate change discussion. Albanese focused on social housing and the ‘Help to Buy’ scheme for housing, while Morrison focused on the creation of jobs post pandemic.

Nineteen year-old Neal O’Brien is grateful that he gets the opportunity to vote in the federal election, and believes that every ballot cast is one step closer to building a better future for Australia.

“The right to vote is essential for a functional country. Leaders should be supported by the majority of citizens and be a representation of those people,” he tells upstart.

In order to target young voters, the Liberal Party have announced a number of policies aimed towards youth, including added provisions for mental health, school and university funding and added support for getting young people jobs.

Miller is one of the many teenagers who find themselves eligible to vote right before the election, after celebrating his birthday earlier in the month. While he has a brief understanding of how to vote, he’s looking forward to casting his ballot on Saturday.

He says he feels that the government hasn’t “listened” to what the Australian population wants.

“I think both party leaders have their values in the wrong places and should focus on what is important for our future,” he tells upstart.

AUTHOR: Georgia Tacey is a third-year Bachelor of Media and Communications (Journalism) student at La Trobe University. You can follow her on twitter @georgiatacey

PHOTO: 2016 Australian Election – Voting Booths by Australian Electoral Commission available HERE and used under a Creative Commons license. This image has not been modified.