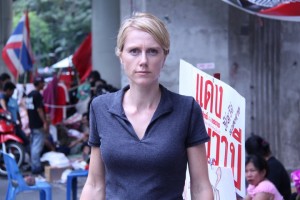 Zoe Daniel had originally planned to be a vet but when her science teacher suggested she should do something she was better suited to; she found her calling as a journalist. Her career started in 1993, working as a regional radio producer in Adelaide’s ABC office. She worked for a number of years in ABC’s rural department as a journalist as well as a presenter of ABC’s the Country Hour in Victoria.

This, she says, was an important stepping stone to becoming a foreign correspondent. Daniel’s earlier career taught her to work independently, not just in gathering stories but in dealing with technological and editorial problems on her own, as well as adapting quickly to different situations and remote environments. Her first foreign posting was as the ABC’s Africa correspondent from 2005-2007 and is now in her second foreign posting as ABC’s South East Asia correspondent.

Before heading out on assignment from her base in Bangkok, Zoe Daniel always makes time to spend with her young family and indulge in normality, juggling her job as a foreign correspondent with her role as a mother.

The job of a foreign correspondent is certainly changing. We have to respond more quickly now when there is breaking news because of the audience demand for instant information. We also now do radio, TV, online and social media coverage all at the same time which can be quite demanding. I still spend plenty of time in the field doing features though, and I think there will always be audience demand for good journalism. More than ever people want to see into the worlds of others. That’s what we can do – we open a window. I’m very positive about the future of broadcast media. At the ABC we have so much content, we just need to think about distributing it in new ways because the audience is receiving it differently.

I loved every minute of my time reporting in Africa. It taught me a lot about taking time to understand and tell stories well. It’s such a privilege to be able to work in the remotest of places and be invited by people to be part of their lives for a short time. Many stories affected me there but following displaced people in war torn Southern Sudan back to their homes after the signing of the 2005 peace deal was probably the highlight. Most had been away from their homes for a dozen years or more, so to witness their pure joy to return was an amazing feeling.

As the ABC South East Asia correspondent, you had the opportunity to interview Aung San Suu Kyi. What was that experience like?

It partly was a relief to finally sit down with her because we had worked for months to secure the interview and I was worried it would fall over at the last minute. Of course Aung San Suu Kyi is an amazing person and I’ve been very lucky to follow the most recent part of her journey very closely since she was released from house arrest. It was great just to be able to ask her what I wanted to know directly. She was very generous with her time. She even wrote my then four year old son a thank you note because he made her a birthday card.

Is there any story in particular that affected you the most so far while reporting in South East Asia?

Covering Burma has been a wonderful thing because it’s been a largely positive story, which is unusual for us. Many stories have distressed me but being a mother I think I’m most affected by stories about women and children who tend to be the most vulnerable during natural disasters and conflict. Possibly the most upsetting story I’ve ever covered was a bridge stampede in Cambodia in 2010 that killed hundreds of young women who were on their way to a festival. Daughters, wives, mothers were all crushed to death and their bodies were placed in tent morgues at the major hospitals around Phnom Penh. I’ll never forget the screams of a toddler when she saw the face of her dead mother that day.

Has the potential danger of a situation you were covering ever made want to you back off from a story? Do have an example?

Since I’ve had children I worry more that something will happen to me and they will end up without a mother. During the civil unrest in Bangkok in 2010 when I was only a few weeks into this posting I spent a fair bit of time trying to avoid getting shot during the battles between protestors and the army. I definitely had a few ‘what on earth am I doing here’ moments based mostly around my concern that I was taking risks that a mother of young children should not take!

In situations of political complexity and conflict, is it hard to maintain a level of journalistic objectivity?

It can be but it’s very important to try to see the situation from both sides and speak with people who have opposing points of view. If views are completely polarized its best to stand back, cover the range of positions and let the audience decide which view they support. For me, again, it’s most difficult to accept that the most vulnerable people are the ones with the least power and inevitably they’re the worst affected.

What advice do you have for those aspiring to be foreign correspondents?

Become multi-skilled, tick your boxes but don’t expect it to happen overnight. You will be a better correspondent later than sooner because you will better understand people and the world. Learn everything you can about the technology you are using because you will be the only one who can fix things when you’re on the road. Don’t forget that stories are not just stories; they’re people. Don’t ever lose sight of the humanity of what you do. Be ethical and know that as a journalist it’s ok to care about the people in your stories. Give your audience a window to their world.