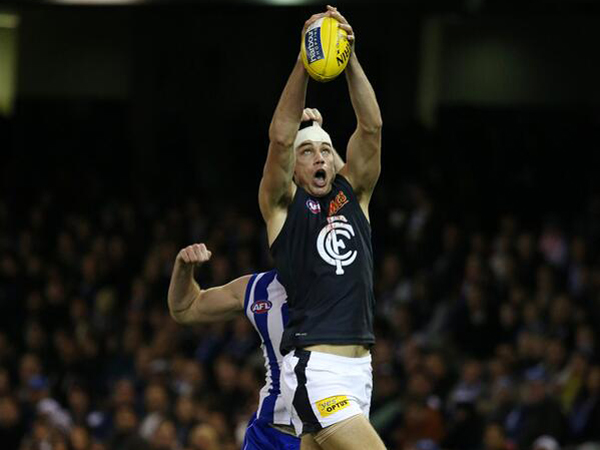 It was expected that there would be few winners out of this year’s investigation into Essendon’s controversial supplements program, and fortunately for the Blues, their ‘Mad Monday’ celebrations will be postponed for at least another week, as they snuck into the top eight at the Bombers’ expense.

Carlton finished the regular season with an even 11 wins and 11 losses from its 22 matches. Its percentage was an equally mediocre 106.7.

It took far too long for Carlton to adapt to the trademark ‘around the boundary’ style that coach Mick Malthouse tried to implement, and after losing its first three matches of the 2013 season, fans were left to recalculate their aspirations.

Carlton entered its bye in Round 13 on an even keel, with six wins from 12 starts, before consecutive losses to eventual fellow finalists Sydney and Collingwood saw the heat once again applied to Malthouse’s men.

Carlton finished its season strongly, with a stirring round 21 defeat against its elimination finals’ opponent Richmond, at the MCG, which will give the Blues an abundance of confidence going into this week’s match.

Last Saturday, the Blues managed a thrilling one-point victory against finals-bound Port Adelaide, thanks to an incredible eight-goal final term, to secure their place in September, despite trailing by 29 points at the last change.

Importantly it was Carlton’s leaders who dragged it back into the match, with an inspiring final quarter from skipper Marc Murphy. The much maligned Bryce Gibbs and ever-reliable Kade Simpson ensured Carlton mowed down a strong Port Adelaide side to head into its first final brimming with confidence.

Strengths:
Carlton’s style of play should give it a big advantage on Sunday afternoon, having finished the season fourth in the competition for clearances, second for winning the ball around the ground stoppages and fourth in hitouts, primarily thanks to star ruckman Matthew Kreuzer. It also rank third for contested possessions, while Richmond is ranked fourteenth.

High-pressure finals football is noticeably more physical than home-and-away games and relies on sides winning a lion’s share of possessions. If Carlton’s talented midfield can get regular supply to its key targets, Jarrod Waite and wingman Lachie Henderson, the Blues’ finals experience may prove too much for a nervous Richmond side.

#AFLNorthBlues @CarltonFC #Kreuzer marks in the first half. Blues up by 6 at the main break. pic.twitter.com/r40ErgONUN

The Blues seem uncertain of who their best target up forward is, struggling to find a balance between enough talent up forward, and the right amount of support for Michael Jamison down back.

Like 2009-10 grand finalist St Kilda, throughout the late stages of the last decade, there are also queries over the Blues’ overall depth, with their bottom five players not up to the standard needed to sustain long-term success. A reliance on too few players can often be a side’s downfall come September.

Key Players – Jarrod Waite:
Jarrod Waite produced one of the performances of the season in round 11’s narrow loss to Essendon, finishing with seven goals, 19 disposals and 14 marks, 10 of which came in the first half. If Waite can prove to be such a dominant focal point up forward for the Blues it may go a long way to Carlton prolonging its season.

After fearing his season was over with a knee injury, former captain Chris Judd is now an outside chance of playing this weekend, after completing a light session on Tuesday. Not only does Judd command a key opponent, the champion still has the potential to prove instrumental in fashioning a Carlton win.

Prediction
Carlton’s upset win against the Tigers, in round 21, and last weekend’s performance against Port Adelaide, will have it believing that it is more than capable of winning this week. But Richmond will be too eager for its first finals’ victory in 12 years and should beat the Blues by under two goals.