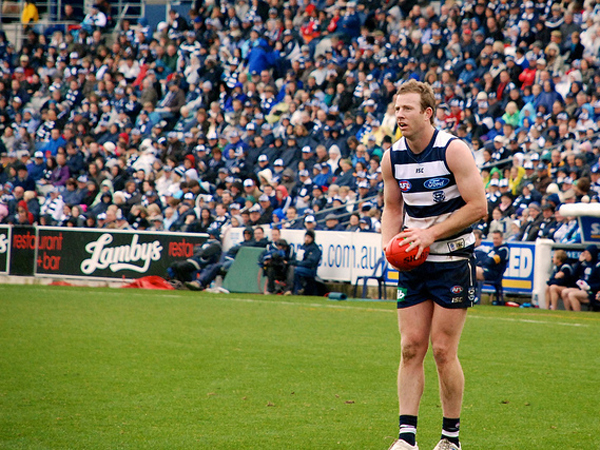 After losing last year to Fremantle in a bitterly disappointing elimination final, Chris Scott’s side started 2013, quite literally, under the spotlight, as Simonds Stadium was upgraded over the summer to have four huge, skyline-dominating floodlights.

Experience was added to the list in the form of veteran defender Jared Rivers and ex-Kangaroos ruck-man Hamish McIntosh, as well as young up and coming midfielder Josh Caddy, who was traded from Gold Coast.

But surprisingly the most successful recruit was forward/ruck-man Mark Blicavs, who was selected with pick 54 in the rookie draft. Blicavs was a steeplechase runner who had aspirations of qualifying for the 2012 Olympics before switching to AFL, a code he hadn’t played since he was 14. Despite the occasional schoolboy error, he went on to enjoy a hugely successful first year, playing 19 games and kicking seven goals.

As for the rest of the Geelong side, the Cats have stepped up another gear from their last campaign and have finished the home and away season well poised in second place.

A seven game winning run at the start of the season got the ball rolling, and since then Cats have looked in imperious form. Consistency has been a bit of an issue, with a couple of disappointing losses from winning positions, but Scott’s men will take a lot of solace in the fact that none of their four defeats were by a greater margin than 10 points.

The depth of its playing list, arguably, looks better than it did in any of its previous premiership years, and after recording victories over each other team in the top four, Geelong will roll into September feeling very confident.

Having enjoyed a superb season last year, where he won his first Carji Greeves Medal, key forward Tom Hawkins hasn’t hit the same heights in 2013. This is largely in part to a debilitating lower back injury that, while not painful enough to require surgery, has had a profound influence on the way he plays and, most importantly, his self confidence.

He’s been fortunate that others around him have stepped up and reduced what would have been a sizable void, but there’s no doubt that it’s an area teams will look to exploit. As fast and dynamic as modern footy is, there are always moments in big games where you need someone to just batter through the pack and take a big contested mark.

At the moment Tomahawk doesn’t look capable of doing that, which takes away one of the Cats’ big weapons.

Geelong’s biggest strength, at the moment, is the depth of its squad. Seasoned pros like Paul Chapman, Joel Corey and Josh Hunt haven’t necessarily had poor seasons, but have seen themselves relegated from the starting 22 due to a number of promising youngsters outshining them. Scott has always been a big promoter of youth, and though it probably was a bit hit and miss last year, the benefits of blooding some of these younger players is clear for all to see.

On top of that are the various aspects that we’ve come to expect from a Geelong side. Its speed, ball carrying ability and transition from defence to attack is the best in the league, and when it all clicks there’s not many sides who can keep up with it.

He’s always been a mercurial talent and a favourite among supporters, but this season Steve Johnson has stepped his game up to another level.

A move into the midfield has seen him get his hands on the ball on a more regular basis and as a result has been able to consistently have an influence on results. He’s currently averaging 29 touches a game, seven more than last year, and has emerged as a real leader among Geelong’s young charges.

He also has an uncanny ability to drift forward and chip in with a goal or four, and is one of the best in the competition at finding space in the pockets. And of course there’s that outrageous ability of his to score from the impossible angle.

Geelong need him firing if it holds any aspirations of another Grand Final.

It’ll be interesting to see how Geelong end up. Its list still has plenty of experienced heads, who know how to win a premiership, but with each year there is more of a reliance on its young guns to step up. Fortunately for the Cats, there’s just so much talent in each position that I think they’ll cope fine.

Tom Midwood is a third-year Bachelor of Journalism (Sport) student at La Trobe University and is a Geelong supporter. You can follow him on Twitter at @tom_midwood.