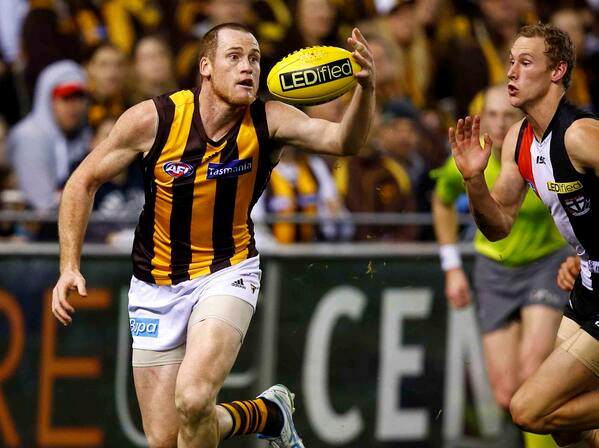 Rampaging one week and calculated the next. The 2013 AFL home-and-away season has played host to the very best of the mighty fighting Hawks. A mixture of individual standouts combined with consistent team performances will excite Hawthorn fans and ensure rival clubs, and their supporters, endure some sleepless nights heading into September.

Despite a minor hiccup in Round 1, to the club’s bogey team Geelong, Hawthorn has consistently handled all of the challenges thrown at it this season. A 12-match winning streak – eventually broken by a second Geelong defeat – laid the foundations for its season, with the only other blemish being a 41-point shock loss at the hands of Richmond in Round 19. With key personnel in form and a relatively short injury list, Hawthorn rightly enters the 2013 finals as firm favourites to hoist the premiership cup.

Arguably the most impressive element of the Hawthorn Football Club is the team’s ability to pile on scoreboard pressure, regardless of its opposition. Whether it is Lance Franklin from the left-hand boundary, Cyril Rioli roving the crumbs at ground level or the league’s Coleman medallist, and most dominant forward, Jarryd Roughead, the Hawks have no shortages when it comes to finding the big sticks.

Sharp shooter Jack Gunston and his partner in crime Luke Breust are also in ominous form, combining for 72 goals thus far, and adding to the already imposing challenge of keeping Hawthorn’s score to less than 100 points. With so many avenues to goal, it’s going to require a herculean effort to deny the Hawks on the scoreboard.

While last year’s shock loss to Sydney will still occupy some Hawthorn headspace, the motivation and hunger to succeed this finals series should be on display more than ever. The ageing, yet experienced, trio of Sam Mitchell, Luke Hodge and Brad Sewell know that their opportunities are beginning to dwindle and will be bullish on their chances of adding a second premiership to their already impressive resumes.

If there has been one criticism of Hawthorn in recent times it has been the lack of leg speed currently on its list, especially through its midfield. Its hard in-and-under type players are scattered all over the ground when Hawthorn takes to the field, but it is the quick outside runners that seem to be non-existent at the club. If Fremantle or Geelong can adopt the Richmond game plan and play direct corridor football, the Hawks will be left scratching their heads as to why they did not recruit midfield speed.

It’s possible that Lance Franklin would be the most frustrating player to coach in the entire league. While undoubtedly gifted, the Hawthorn spearhead often lets his team down with foolish on-field antics, usually of the rough conduct nature. This was no exception in Friday night’s win over Sydney, as Franklin belatedly dumped Nick Malceski. The high contact incident looks certain to see him rubbed out of at least the next two matches. His likely absence will cause a headache for coach Alastair Clarkson and prompt a reshuffle of the Hawks’ attacking third.

Yet again Sam Mitchell is likely to feature at the pointy end of the Brownlow count after another impressive season. Mitchell leads the club in both kicks and handballs, but crucially averages 4.2 clearances and 3.2 tackles a match, making him the complete midfielder. With Mitchell his finals’ experience in the bank, he will play a key role in determining how far Hawthorn travel in September.

Hawthorn has won the minor premiership eight times and on every occasion the club has gone on to make the Grand Final.

Not only are the Hawks littered with playing talent, it plays a brand of ‘team’ football which is as exciting, as it is damaging. If it can replicate its win over Sydney on Friday, Hawthorn will be right on track for another Grand Final appearance. If they make it, expect the Hawks to win the flag.