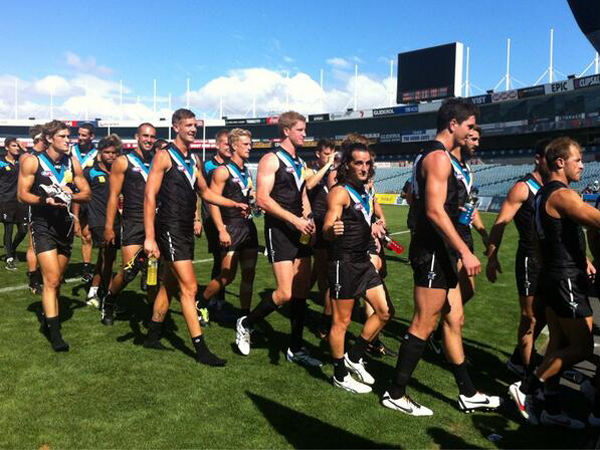 After a horrid 2012 season, Port Adelaide entered the new year with renewed hope and optimism after a productive off-season, both on and off the training track.

The strenuous pre-season translated into immediate on-field success, with the Power defying all odds and winning its first five outings.

Most were quick to write off the young side after losing their next five games. Uplifting victories over Sydney and Collingwood confirmed that Port Adelaide was a much-improved outfit. While those two upsets set the benchmark for a promising year, the highlight for many Port Adelaide fans was winning both of the thrilling showdown matches, against cross-town rival Adelaide.

What an awesome way to finish the pre season! A great team effort but the skipper @travisboak10 a definite standout! pic.twitter.com/f4wI8CHdmv

Strengths:
The Power’s midfield has been the backbone to the club’s momentous rise up the ladder. It has a good balance between experience and youth, and Hinkley will be pleased that his core group of midfielders have gelled exceptionally well and played consistently throughout the home-and-away season.

Captain Travis Boak, Kane Cornes and Brad Ebert have all been prolific disposal getters, while Hamish Hartlett and Chad Wingard are establishing themselves as immense talents of the game.

Port Adelaide has a very lively forward line and many avenues to goal. Key forwards, Jay Schulz (44 goals) and Justin Westoff (27 goals), have been well supported by Angus Monfries (37 goals) and Wingard (40 goals) all season.

Another significant driver behind the Power’s success has been its high tackling pressure. It has averaged 67.1 tackles per game, which is the third best in the competition.

Weaknesses:
Similar to Richmond, the Power will go into September with only a handful of its players experiencing finals football.

Saturday night’s elimination final will be an enormous challenge for many of Port’s inexperienced players, against a seasoned Magpie unit. Collingwood hasn’t missed a finals series since 2006 and is accustomed to playing in front of a packed MCG crowd.

The Power’s decision-making and ball use will need to be a lot more polished if it wants to go deep into the finals. It is ranked the lowest for disposal efficiency at 70.3% and has averaged the fourth most clangers in the competition this season.

Port Adelaide struggled to play well against quality sides when travelling interstate this year. The young side only won four of its 10 matches away from home, which were against teams below it on the ladder – Melbourne, Gold Coast, GWS and St Kilda. Meanwhile some of the interstate losses it endured included North Melbourne, Carlton, Essendon, Geelong and Fremantle.

Key Player – Travis Boak:
After being linked to Geelong towards the end of last season, Boak opted to re-sign with Port Adelaide and later succeeded Domenic Cassisi as captain of the club. The 25-year-old is his side’s barometer and has proven himself as a natural leader over the course of this year.

Boak is an instrumental part of the young midfield, averaging 25 disposals per game and winning a lot of the contested ball. He can also go forward, managing to kick a career-best 18 goals from his 21 games this season.

The courageous stalwart was fortunate enough to play in the 2007 Grand Final, in his debut season, but hasn’t played in a finals game since that humiliating defeat to Geelong.

Boak enjoys playing against Collingwood and will take confidence into the elimination final, after collecting 29 possessions in the upset win in round 14. With a number of younger players in Port’s team, his leadership is crucial during the finals.

Prediction:
Making the finals was a huge achievement in itself for the Power. However, it’s hard to see the emerging side pull off an upset win over the Magpies. Regardless of Saturday night’s result, the transformation of the Port Adelaide Football Club has been a great success story this year and it has the talent to advance further as a group next season.