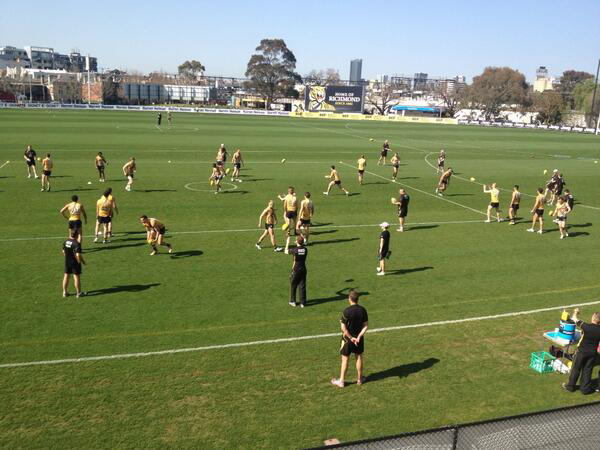 The Tigers finished on 15 wins and seven losses when they last played finals in 2001. They have managed to equal that record this season, finishing in fifth position and earning a home final at the MCG, on Sunday afternoon, against old foe Carlton.

In his fourth season as Richmond’s senior coach, Damian Hardwick has finally built a side that is producing consistent football on a weekly basis. Despite showing glimpses last year, the Tigers found it difficult to finish off games and win tight contests.

Richmond has played with a great deal of confidence this season.

Morale-boosting victories over two top-four sides, in Hawthorn and Fremantle, highlighted to the competition that its best football can defeat any opposition.

Its strong finish to the season will provide the playing group with a lot of belief leading into the Elimination Final against Carlton.

The chemistry and depth of the Richmond midfield has been a major reason behind its successful season. Opposition sides will usually tag either captain Trent Cotchin or Brett Deledio, which ultimately frees up the likes of Brandon Ellis, Reece Conca, Nathan Foley, Daniel Jackson and Dustin Martin.

These players work tremendously well together and can be very damaging with their run and carry through the midfield.

The presence of Aaron Edwards and Tyrone Vickery up forward eases the pressure off Jack Riewoldt, and provides the midfielders with more options inside 50. The Tigers have tightened up defensively this year, and the inclusion of Troy Chaplin has added significant balance to their backline.

They have conceded the third least amount of points this season, largely as a result of their outstanding defensive pressure.

Richmond has been able to take control of games early, winning 15 first-quarters this season – ranked equal third in the competition.

Only Chaplin, Edwards, Shaun Grigg, and Ivan Maric have played finals football, with their former clubs. The lack of finals experience is a concern for Richmond, especially considering that the majority of Carlton’s side has been part of a September campaign.

The Blues have won 11 out of the last 12 outings against the Tigers, and have the mental edge following their come from behind win in round 21.

Richmond was also the worst tackling side in the competition, at the completion of the home-and-away season. The biggest deficiency in several of its midfielder’s games is their lack of pressure and intensity around the stoppages.

Foley is the only player in the side to average more than four tackles per game this season. Much to the frustration of the Tiger faithful, Richmond has been quite wasteful in front of goal and is equal with Collingwood for the third most behinds this season.

Cotchin must be at his absolute best if Richmond wants to be a potent force throughout the finals. He finally gets the opportunity to lead his beloved Tigers on the big stage, after 107 games in the AFL system.

Despite a mid-season decline in form, Cotchin has enjoyed another consistent season, averaging 26 disposals and just over five clearances per game.

The young captain is Richmond’s most dangerous midfielder and he will be hoping to emulate his 31-possession performance in the round one win over Carlton.

The Tigers have a tendency to play badly in games where Cotchin doesn’t have an impact. This was the case in their last meeting with the Blues, with Ed Curnow restricting him to just 14 possessions in the 10-point loss.

Cotchin has tremendous support around him in the midfield, but he must break the hard tag this time around and play a captain’s game on Sunday afternoon.

Finals football is unfamiliar territory for most of Richmond’s list. The cut-throat final against Carlton is certainly winnable, but the experience and class of the top four sides will make it tough for the Tigers to be a genuine threat in September.

Mitchell Wood is a second-year Bachelor of Journalism (Sport) student at La Trobe University and is a Richmond supporter. You can follow him on Twitter: @Mitchell_Woody