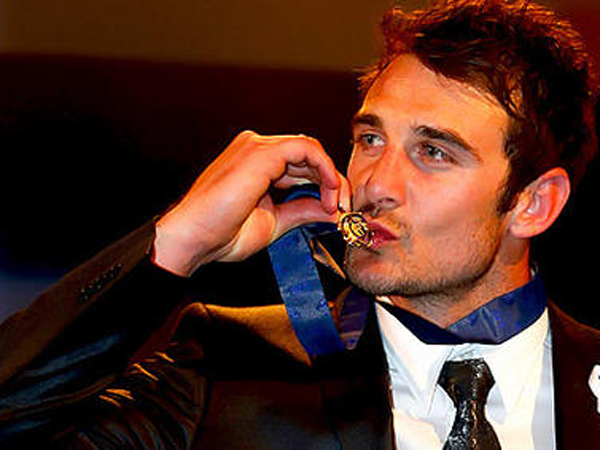 The wags are frocked up, the red carpet has been rolled out, and Andrew Demetriou is timing himself to see how long he can drag out players names.

Yes, ladies and gentlemen, it’s that time of year again where the AFL awards its best and fairest with the Brownlow Medal.

There have been a lot of names thrown about this year as to who will win, but in truth any of the favourites could walk away with football’s most coveted prize.

Well done to Jobe Watson on winning the #Brownlow Medal. Check out the leaderboard and images here http://t.co/4FHkhv37 pic.twitter.com/A6EdxlZe

Gary Ablett has been in incredible form for the entire season, and rightly stands as the odds-on favourite to take home the medal. His much improved Gold Coast Suns really took a step up this year, and with Ablett dominating the midfield, he won’t have many teammates taking votes off of him. However, it remains to be seen whether the Suns’ eight wins will be enough to see him win his second Brownlow Medal.

Joel Selwood has led Geelong from the front all year, with the Cats skipper a very good chance to win his first Brownlow Medal. Selwood’s tough and uncompromising style of play was one of the key factors in Geelong’s run to the preliminary final. However with such a star-studded team, Selwood may lose a few votes to teammates.

The 2011 winner is right back in the hunt for his second Brownlow Medal. Swan picked up the most possessions in the league, with an outstanding average of 31.2 disposals a match. However with Collingwood teammate Scott Pendlebury another of the big Brownlow favourites, Swan will be hoping that the umpires also noticed just how well he played this year.

The veteran Hawk had another blinding season, and showed that age hasn’t slowed him down at all. At 30 years old, Mitchell racked up the fifth highest  amount of disposals in the Hawks midfield, and played a big part in Jarryd Roughead winning the Coleman Medal. Don’t be surprised if Mitchell swoops in and snatches the Brownlow – he’ll certainly have earned it.

Pendlebury continues to up his game to a new level every year it seems, and 2013 has been his best yet. With the second most handballs in the league, Pendlebury’s quick hands and even quicker feet have seen him become one of the favourites for the Brownlow. However, with Swan also having a terrific season, Pendlebury may just fall short of getting the votes he needs to win.

Jack has proved that Sydney are not solely reliant on Adam Goodes, after the young midfielder ensured that last year’s premiers would be just as tough to beat in 2013. His relentless pressure saw him mow down 159 tackles during the season, the second highest in league behind teammate Ryan O’Keefe. His biggest competition for votes will be young gun Daniel Hannebery, who had a breakout year himself.

There are other players who also have an outside chance at winning like Richmond’s Trent Cotchin, the Western Bulldogs’ Ryan Griffen, and Fremantle’s Michael Barlow, however this writer can’t look past Gary Ablett as the favourite. Ablett was voted the leagues MVP by his peers recently, winning by more than 1000 votes. The Suns captain has truly outplayed himself this season, and deserves to take Charlie home.

Paddy Naughtin is the sports editor of upstart, and a third year Bachelor of Journalism student at La Trobe University. You can follow him on Twitter here: @PaddyNaughtin.