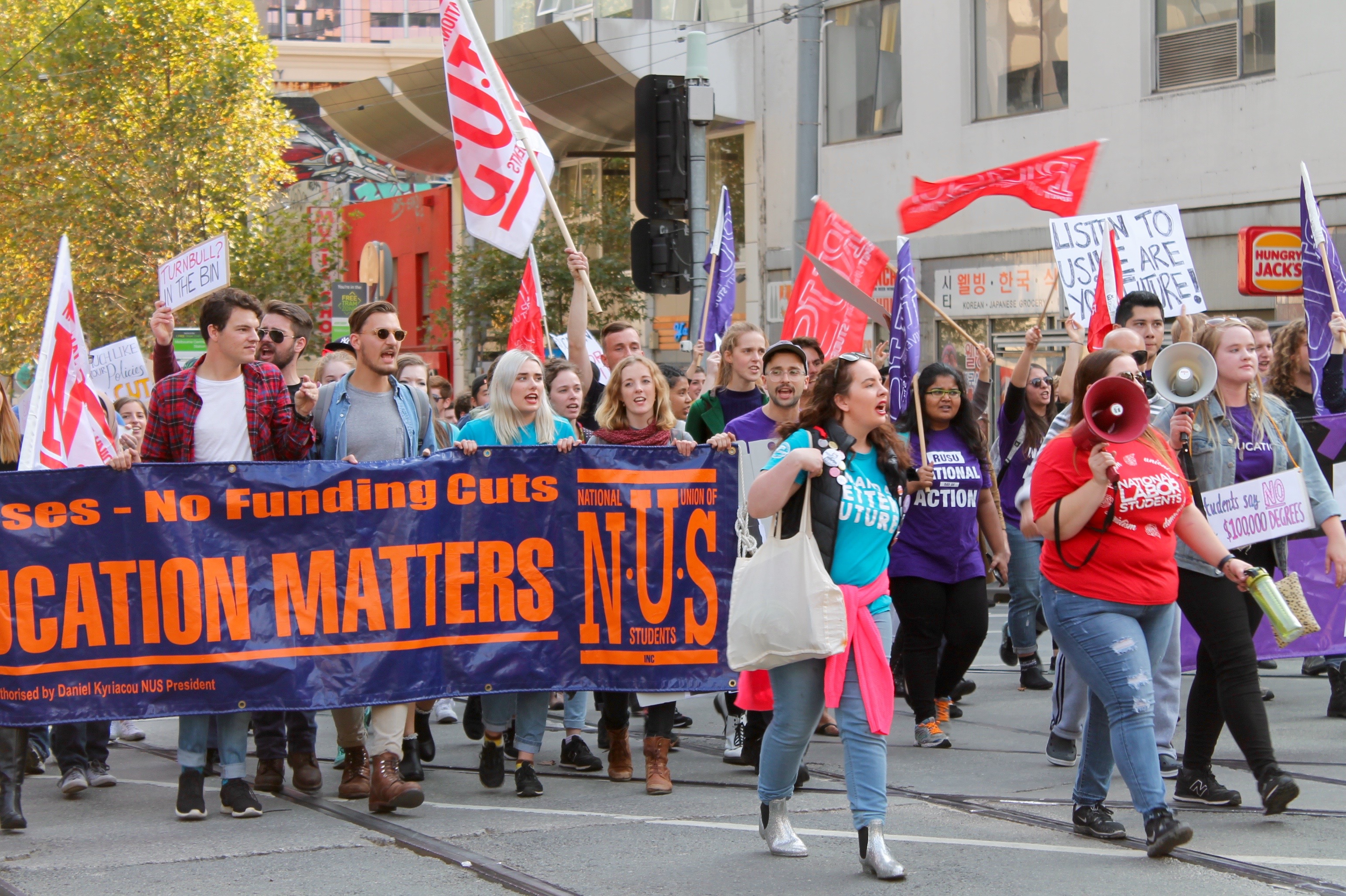 As if worrying about exams, part-time work and the latest drama on Game of Thrones isn’t enough stress, students are now also protesting for what they call their “right” to affordable education.

Speaking at the Universities Australia summit in Canberra last month, Education Minister Simon Birmingham stressed the importance of reform in easing the HELP burden on the budget, failing to rule out fee increases.

At the moment students repay their HELP (formerly HECS) debt and VET FEE-HELP loans once they start earning $54,186 annually.

The protesters, who represent both teachers and student unions, voiced their disagreement to the government’s approach by parading around Melbourne’s CBD shouting “no ifs, no buts, no education cuts.”

Kat Galea, a protester from the Socialist Party, says the proposed changes will punish vulnerable students.

“You’re looking at almost a lifetime of debt with these new fees,” she tells upstart.

“I didn’t even finish my degree and I have a minimum wage job and they’re looking at making me pay back some of my debt when I only earn around $44,000 a year before tax.”

But Beni Cakitaki, a researcher who worked on the Grattan Institute’s background paper University fees: what students pay in deregulated markets, says that people who attend university are still better off than those who don’t.

“Our analysis suggests that there is some room for higher fees before students would be financially worse off from undertaking their degree,” he tells upstart.

“This obviously differs from degree to degree. A creative arts degree will not yield the same financial return over the life of a graduate than, say, a degree in medicine.”

Whilst Cakitaki argues some sort of fee increases are inevitable, he doesn’t believe they will reach unaffordable extremes.

“There is little evidence to suggest we would see the proliferation of $100k degrees,” he says.

He admits that it’s unlikely that many students would be deterred.

“Past evidence suggests that students don’t respond to changes in fees, because the HECS/HELP system removes the immediacy of a price signal.”

Fee hikes aren’t the only thing causing concern though, as students worry about proposals to lower the repayment threshold, which may mean students will be made to start repaying their student loan debt off earlier.

Elliot Downes from National Union of Students (NUS) and the La Trobe Union says the government will lower the threshold to $42,000 a year which is the equivalent to around $800 a week before tax. 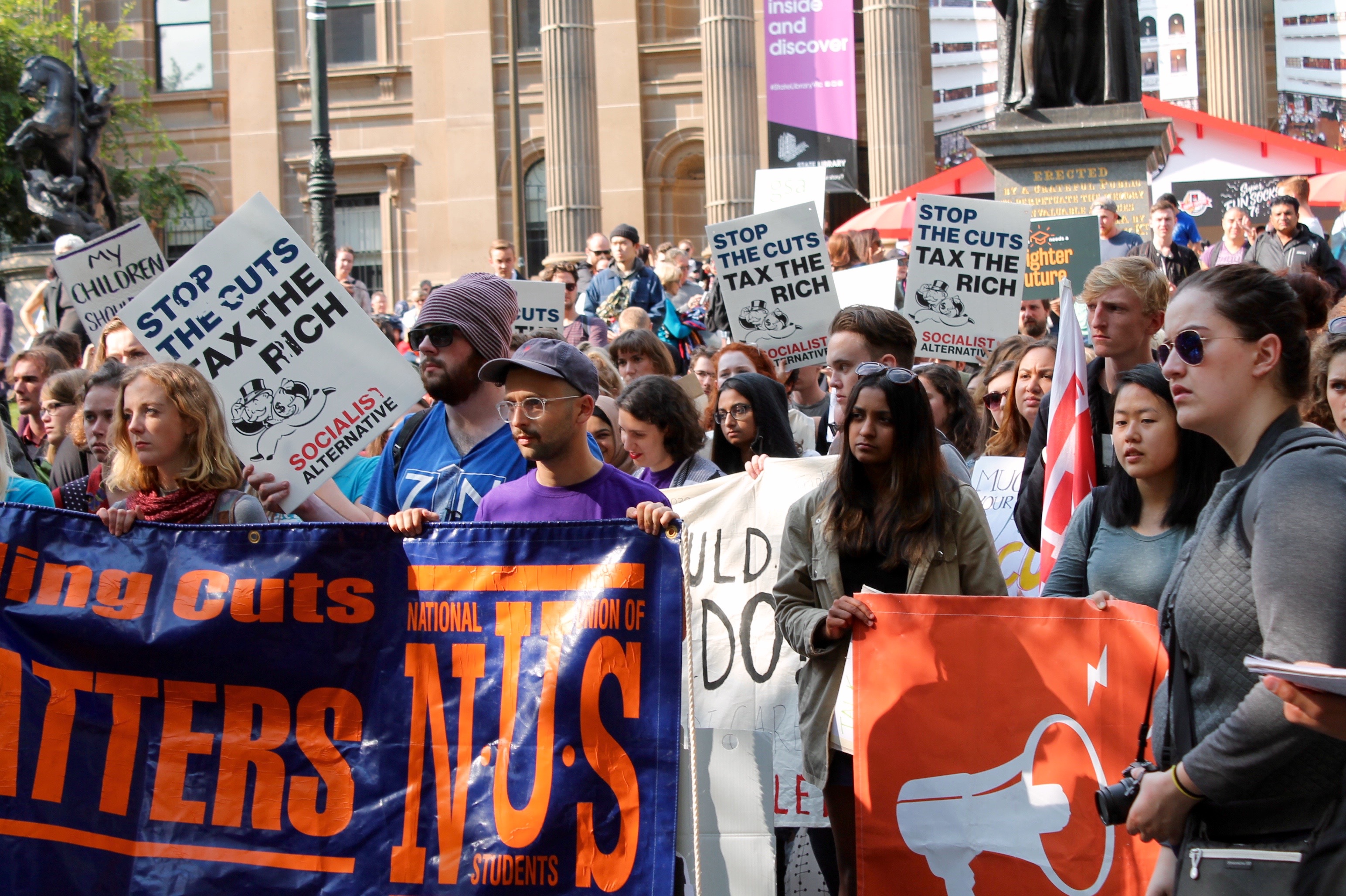 A Grattan Institute report has found that the government could gain back an extra $500 million a year by this scheme and that this would immediately increase the number of people repaying their debt by 50 per cent.

“It’s basically minimum wage and that means with any part-time job you have to immediately start paying back your HECS debt,” Downes tells upstart.

“They will be literally robbing the graves of dead students,” she says.

A recent report published by the Parliamentary Budget Office (PBO) revealed that in a deregulated market the annual cost of the students loan program will blow out by 560 percent over the next decade.

The report estimated that the of cost of HELP debt to the government would soon expand from $60 billion to around $180 billion if the announced higher education reforms were passed.

More expensive degrees will lead to students loaning more from the government, creating a heavier burden on the budget.

The report also mentions that the HELP loan scheme will cause a $11.1 billion loss to the budget due to interest rates and loans that will never be repaid.

“I think having students pay more is a necessary feature of any reform package,” he says.

“The challenge is: how can we expand higher education so that anyone with the ability to finish a degree can undertake one, while maintaining quality, and keeping the system financially sustainable over time.”