It may seem like a mundane stretch of concrete in Harrison Street, Brunswick, in suburban Melbourne, yet every single metre of the velodrome is stained with the blood, sweat and tears of some of Australian cycling greatest luminaries.

‘Henry conducted the schoolboy races to attract new members and talent to the club. Eventually he would get us to ride a Hillman bike. So he was very astute. He was a good clubman, and a very good businessman,’ says club legend Alan Grindal.

He goes on with a grin: ‘Most riders who rode a Hillman bike had an account with Henry, and you just paid it off week by week, as you got your pocket money or your salary at work. You never, ever, got out of debt with Henry; you were always paying off your account.

‘Henry thrived on that. He almost went broke, because he was owed more money than credit. But he survived that, he survived lots and lots of crises. He was very, very successful. He built an empire, the biggest bike shop in Australia during the 1960s and 1970s.’

Alf Walker, who has dedicated more than 60 years of continuous service to the Brunswick Cycling Club, describes Hill as the backbone of the club. 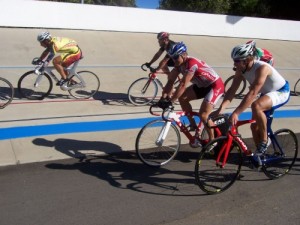 A change of scenery

In 1955, the Brunswick City Council agreed to lease land adjacent to the Merri Creek, formerly used as a land tip, to the cycling club to construct a banked velodrome consisting of bitumen and measuring five laps to a mile. A decade later, the velodrome underwent major renovations, replacing the bitumen surface with a smoother concrete surface. In the same year, lighting was erected around the track and night racing was conducted on a regular basis.

Since moving from a flat, dirt track in Allard Park, to the smoother, faster velodrome, the Brunswick Cycling Club has evolved to be one of the leading clubs in Australia, producing 25 Commonwealth and Olympic Games representatives.

In 1954, Lindsay Cocks became the first Brunswick cyclist to represent Australia at the British Empire Games (now the Commonwealth Games) in Vancouver, winning gold in the 10 mile scratch race.

Since its pioneer, the Brunswick Cycling Club has produced four world champions, seven Commonwealth Games champions, three junior world champions and an Olympic champion – Dean Woods in the 4km pursuit in Los Angeles, 1984. Together, Brunswick riders have combined for 38 medals at these four events, the pinnacle of world cycling.

The honour roll lists some of the most distinguished names in Australian cycling history – Shane Kelly, Gordon Johnson, Gary Niewand, John Beasley, Luke Roberts – but is some of the lesser known cyclists that have provided highlights for Walker and Grindal.

‘[There was] a bloke called Jimmy “JJ” Walsh. Jimmy lacked something to be a world champion, but he was a great judge of pace. He was just a great thinking bike rider,’ Walker says.

‘Geoff Smith went to the 1960 Olympics in Italy, Rome, on the tandem. But he was the fastest bike rider I ever saw off the mark. The first 15 metres. No one quicker.

‘We were at the club championships one year. He raced this young bloke, and they went down the back straight at Brunswick and Geoff was in front. I was the judge there and I wrote down Geoff’s number. Someone said “why are you writing down his number for?” I said, “well he’s going to win it.” Well, with half a lap to go Geoff just went whack, and that was it, the race was over.’

For Grindal, two of the most recent clinic graduates have provided the most enjoyment, including the 2004 Junior World Champion Mitch Docker.

‘Mitch Docker hadn’t seen a bike race until he watched the Olympic Games on television in 2000. And thought he’d like to become a bike rider. So he came down to the clinic and was just brilliant.

‘My favourite female cyclist is Lyndelle Higginson. She started at the clinic when she was about eight. And when she was 14 in the Novice Championship of Victoria she beat the boys. And two years later when she was under 16 she beat the boys again. She went on to win the Victorian Championships, Australian Championships, represented Australia at the Commonwealth Games in Kuala Lumpar [in 1998] and the Olympic Games in Sydney 2000. She then dropped out of cycling, to the sport’s loss. Definitely the best female cyclist to come from the clinic.’

In addition to introducing youngsters to the sport of cycling, bicycle safety, handling and maintenance, the clinic provides the young riders an insight into the history of the sport, striking handicaps, such as the Hubert Opperman Handicap and the Russell Mockridge Memorial.

‘It’s very important. If you don’t have Russell Mockridge handicaps, then people won’t know about the famous cyclists. I’m always a great believer in recognising the people who set high standards and made a high mark on the club and cycling in general,’ enthuses Grindal.

Adds Walker, “We get to educate the young riders not only in their bike skills, but also in their life skills and behaviour.”

With almost 120 years of dedication between them, it is a passion for the sport of cycling that keeps drawing Grindal and Walker back to the Brunswick Cycling Club.

“It becomes a way of life. It’s part of your routine,” Walker says.

“I just like to watch the development of young cyclists. I just like watching young kids develop. It’s always been a passion of mine. Ever since I joined the clinic, after racing, that’s what I enjoyed the most,” says Grindal with a smile.

For further info on the Brunswick Cycling Club, you can visit their website.

For a list of local cycling clubs, you can check out Bike Exchange.

Kyle Sheldon is a journalism student at La Trobe University.  This is his first piece for upstart.