The beloved Preston Market is under threat of redevelopment 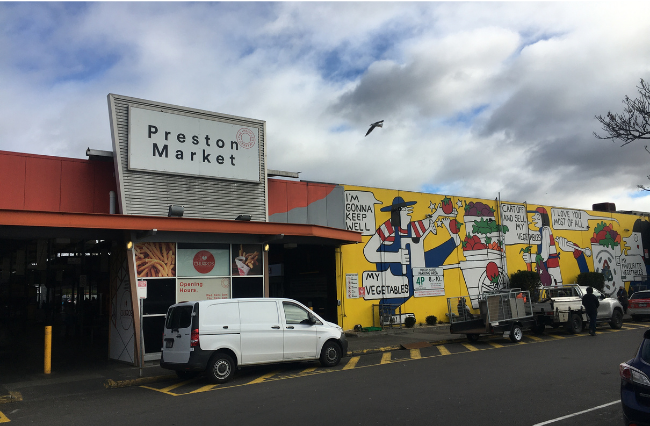 It’s early Saturday morning and shoppers are beginning to pile in through The Centreway of the Preston Market. A greengrocer helps carry boxes of groceries to a lady’s car. Customers struggle to find a vacant car park amongst the busy crowds arriving for market day.

Home to around 120 different traders, Preston Market is the glue that has brought the Preston community together for over 50 years. Locals call it a hub, a meeting place, a space where the many diverse ethnic cultures of the north come to congregate.

Sue Pheon has owned and run one of the market’s organic food stores, Rhubarb Rhubarb, with her husband for 21 years. She says the market-style shopping makes it a unique experience.

“It’s predominately fresh food, small business owners and independent retailers, and that’s not a common thing at the moment,” she tells upstart.

Like many of Melbourne’s outer suburbs, Preston is currently experiencing transformational growth with the area’s population expected to increase from 39,000 to 68,000 by 2041. As the Victorian Government plans to house Melbourne’s rising population, the owners of the Preston Market, Salta Properties, are proposing a redevelopment of the precinct, causing locals to fear for the market’s survival.

For the Victorian Planning Authority (VPA), the Preston Market is a gold mine. Located in a major activity centre between two supermarkets and a train station, the parcel of land creates the perfect opportunity for affordable housing. Together with Salta Properties, the VPA plans to demolish most of the market precinct to make way for a 16-storey, a ten-storey and a two 12-storey buildings,  retaining only the market’s fruit and vegetable section.

Robert Davies, Strategic Planning Manager at the VPA, says his company “want[s] the market kept” but acknowledges that the location needs to be revitalised.

“The site is underutilised at the moment; you know half of it is an asphalt car park,” he tells upstart.

Extensive consultation programs have been held with community members to discuss the proposed redevelopment plans. But, as the third and final phase of community feedback comes to an end, some locals still feel they’ve been left in the dark.

Chris Erlandsen, a spokesperson for the Save Our Preston Market campaign, attended the VPA’s community reference group meetings. He says that Salta Properties and the VPA haven’t considered the community since the plan started, given that their meetings were only held in English. Therefore, have not made efforts to accommodate the many ethnic groups who play a key role at the Preston Market.

“They had people [on the panel] who had never been to the Preston Market,” he tells upstart.

The idea behind the construction is to turn the area into a thriving precinct, with the expectation that residents coming to live on the parcel of land would breathe life back into the 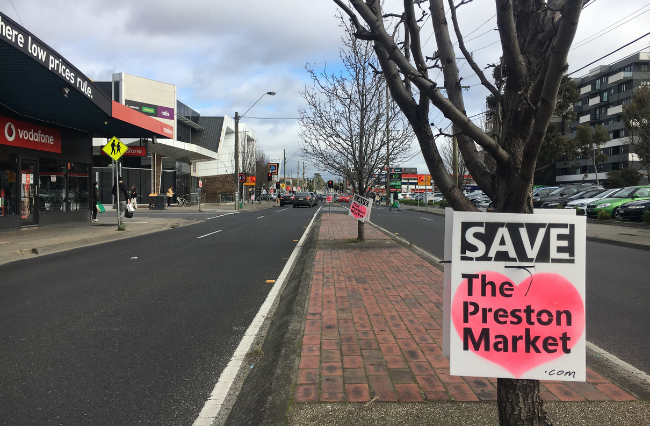 market. However, locals worry that the redevelopment plans appeal to a demographic that is undesirable and incompatible with the existing culture of the Preston Market.

Dominic Mollica, the store owner of MnM Fruit, whose business predominately relies on catering for families and returning customers from all around Melbourne, doesn’t believe the redevelopment will benefit his business at all.

“If anything, it’ll hinder [business], especially during construction,” he tells upstart.

“People who live in apartments, they’re usually young people who go to uni or school and they don’t really cook at home.”

Most of the market’s traders agree that the Preston Market needs some sort of upgrade or facelift but want improvements to be completed without destroying the hub’s emulation of an open-air, traditional European market. Chris Erlandsen says organisations like the VPA, which don’t necessarily have any emotional connection to the area, are not willing to meet the needs of people who do.

“The VPA was trying to change the terminology. They were keen to retain a market, [but] not necessarily ‘the’ market,” Erlandsen says.

Ramzi El Sayed has been the store owner of Flying Carpets and Rugs for three years, though his father set up shop here when the market first began. He fears that the development will disrupt the social fabric of the community and damage the historic significance of the location.

“It’s not just about the development, it’s about what that existing structure represents and that’s a lot of history,” he tells upstart.

“Are we now risking [all of] that at the expense of profit?”

As provisions begin to be finalised, submissions for the structural planning of the precinct are expected to be approved by Minister for Planning, Richard Wynne, by 2022. With time running out, community supporters of the Save our Preston Market campaign will be calling on Minister Wynne to call in all development applications and bring the Preston Market into the public’s hands. It appears this saga still has a few twists and turns to come.

Article: Luke Lay is a second-year Bachelor of Media and Communications (Journalism) student at La Trobe University. You can follow him @Lukelay10