Weeds are like warriors.  They don’t give up.  A gardener may spend hours carefully removing these invasive plants from their patch only to find they’re back in a few weeks.  And this time with a vengeance.

But instead of fighting a losing battle some people are actually embracing the weeds in their garden.

Doris grew up in an Italian family and began foraging for weeds as a child.  Her interest in weeds has remained and for her family, weeds make up one third of the greens in their diet.

‘It means when I am growing things badly in the vegetable patch it is great to go out there and see other things have been demolished by snails but the weeds are thriving beautifully’, she says.

Many people may ask ‘why eat weeds’ but according to Possi, it’s really a question of ‘why not?’  Abundant, free, nutritious and in some cases delicious, weeds have a lot going for them.

Doris admits, though, that some people are concerned weeds may be poisonous.

‘Certainly with mushrooms you need to be careful but there is more latitude with weeds. The wrong weed it is more likely to give you a slight tummy ache than anything else so we can afford to be a little more adventurous in terms of investigating edible weeds.’

During the talk, Doris explained how to identify edible weeds and include them in meals.  The list was extensive and included the well-known dandelion and clover and lesser known Blowfly grass.

She says leafy green weeds are the most useful for eating.  ‘They are the easiest to find and you can pick in enough quantity that is worth bothering about.’  Salads can be made using the leaves from nasturtiums, violets, Chickweed, Purslane, Plaintain, and Three Cornered Leek.

Perhaps the most readily identifiable of all weeds, the dandelion is a versatile plant featuring in recipes for jelly, muffins, wine, salad, and even tempura.  The leaves, flowers and roots are all edible.

Dandelion has a unique combination of vitamins, minerals, trace elements and other biologically active substances in an ideal ratio for the human body.  According to the U.S. Department of Agriculture, they are ranked in the top four most nutritional green vegetables.  Dandelions are more nutritious than broccoli or spinach, contain more cancer-fighting beta-carotene than carrots, and are high in calcium, iron, magnesium, potassium, thiamine, riboflavin, lecithin, and dietary fibre.

And don’t be deterred by stinging nettles. Although care must be taken when picking nettles as the fine hairs on the leaves can sting the skin, causing pain, redness and itching, the sting goes out of the nettles after washing and cooking.  Commonly used in soups, nettles are similar to spinach and are high in iron.

Three cornered leek, otherwise known as onion weed or wild onion, is Doris’s personal favourite.  Receiving its name from its three-cornered stem, the plant has white flowers similar to snowdrops.  If you ever happen to brush past Three-cornered leek you will definitely know about it.  The aroma is very strong!

Doris uses Three-corned leek in place of onions in autumn and winter, adding it to soups, pasta, potato salad, homemade bread and pesto.  Not wanting to waste anything, Doris also adds the flowerheads to salads. 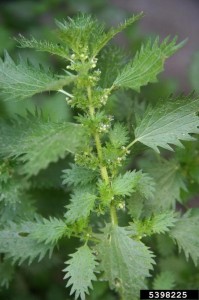 When foraging for weeds, care must be taken not to pick them in areas that have been sprayed with herbicides or pesticides or which could be contaminated with chemicals such as disused service stations and industrial sites.

The safest place to collect edible weeds is your own backyard or in less urban spaces.  And like any vegetables, always wash your weeds before eating.

Weeds can also be cultivated but in Doris’s experience they are just as hard to cultivate as your veggies so it is better to collect them where they grow naturally.

‘I am trying to grow a dandelion patch at the moment and it is hilarious.  I have planted seeds and I am waiting for them to grow.  No dandelions have grown but I have got nettle and sow thistle,’ she says.

Doris expects more people will adopt edible weeds as part of their diet with the trend towards higher density living in our cities, less private land available to grow own food and the desire to forage and access local food.

Ben Wrigley from the North East Ranges Permaculture Group summed up the sentiments of the group at the end of the talk: ‘It’s all about realigning our brain cells with what is happening in the world now and a fantastic way of readdressing the place we live in.  My vegetable garden now includes the whole block.’