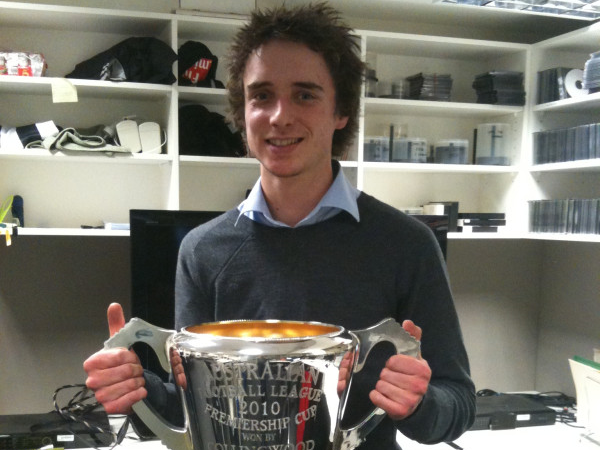 When he learnt that he wasn’t destined to become the next AFL star, Luke Mason set his sights on finding a job in football.

That dream led Mason to his current occupation as digital content producer for the Collingwood Football Club, where he works at the epicentre of club activity for arguably the most widely recognised team in the AFL.

Mason’s job involves the management and upkeep of the Collingwood FC website and social media streams, assisting other departments within the club and producing club video content.

“On game day when news is breaking you have got to be there at the source, wherever it might be, and cover it from a club point of view,” Mason said.

Fuelled by a deep passion for the Collingwood Football Club, Mason began writing for online supporter websites in early-to-mid to high school.

Mason then got in touch with the Collingwood media department and was rewarded with his own segment on the club’s website, before progressing to providing coverage of the Magpies’ VFL team when it was established in 2008.

The self-confessed football fanatic became the first intern to be taken on by the club during his final year of university in 2011.

Mason was able to land these roles and eventually his current job by simply “knocking on the right door and being persistent”, and he recommends that other budding journalists do the same.

“It costs you nothing to send emails, to make phone calls, or whatever it might be, and get in touch with people and network and at least present your case.”

“Once you do get that foot in the door, and have the right work ethic and are really keen to help out, then from there things tend to snowball,” he said.

While the hours are difficult and irregular, Mason’s passion for the sport allows him to power-on in the face of fatigue.

“If the news isn’t going to sleep then you can’t sleep either,” he said.

The job also comes with its pressures, with the online community ready to pounce on any small slip-up made by the Collingwood media department.

“Everyone out there is very quick to pick up on something that might be slightly wrong, controversial or different, whether it’s a spelling error or something that can be misconstrued.”

Mason stresses the importance of delivering news from the club’s point of view and not his own, while also steering clear of anything that will put the position of himself or anyone at the club at risk.

“Just being aware of what you think will wash well with supporters and the public and what they might respond to [is important].”

As for the future of the media industry, Mason believes “news will never die and the appetite for news is only going to keep growing and growing”.

“There are so many more websites popping up out of the ground that want to make money somehow and they need to build and fill content so I think there will always be a need for it.”

“News can break at any point in time so there’s always going to be demand for people working in that area.”

Mason has also seen his own job change drastically during his time at the club, as great importance is placed upon staying at the cutting edge of technological advancements.

“The need to be innovative and to be the first to do things, particularly for us at Collingwood, to show that we are at the forefront of what we do is really important.”

“It’s also important to make supporters feel like they are receiving the news first from us, not hearing it from other outlets which can be challenging sometimes.”