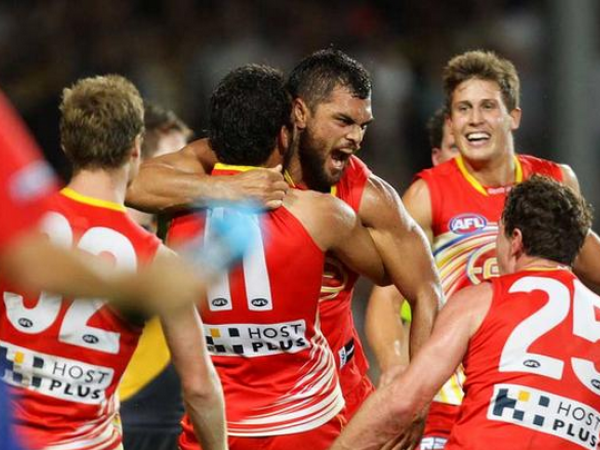 Do you remember that scene in The Matrix where Hugo Weaving dangles Keanu Reeves over train tracks?

“Hear that, Mr Anderson? That is the sound of inevitability.”

No doubt that fitting line is getting a run around now the inevitable has happened, and Gold Coast’s poached rugby league recruit Karmichael Hunt has called time on his AFL career.

But was Hunt’s AFL career a failure?

Those who say ‘yes’ will do so on two counts: their ‘fond’ memories of Hunt routinely hobbling out of the play in his first season, riddled with cramp from the first five minutes onwards; and the simple fact that he was picked up by the AFL as a promotional tool, not a player. They might even snicker at those old Swisse Ultivite ads in which he took a specky off a Parisian wall.

Gold Coast’s Karmichael Hunt has confirmed his departure from the AFL. http://t.co/wvo4XdS85j pic.twitter.com/yoU5KBWM2z

In 2011, Hunt was the most overpaid player in the game. Few would dispute that. Quite often, he seemed to be actively avoiding the ball.

He will finish his AFL career having played 44 of a possible 88 matches, with Gold Coast reporting a new injury will keep him out of this Sunday’s clash with West Coast. Form and endless soft tissue injuries continually kept him out of the side. He would play just two matches in 2014.

So what now for Hunt? Back to the NRL, perhaps? Well in all likelihood no, with 27-year old set to be unveiled as the new signing of rugby union team the Queensland Reds.

So was Hunt a success story? Well, the AFL, in ceasing its endeavours to buy more code-hoppers, might have already settled that debate.

However, Hunt’s supporters are likely to point out his promotional value as well as the improvements he made to his game from 2011 and onwards.

Yes, he started out as a very limited player on an obscene $3 million deal. And yes, he was there first and foremost to gain the attention of rugby league’s market audience.

However, the improvements made by Hunt in 2012 rank with just about any other player in that time. It was a year in which the utility averaged nearly 15 touches a game, playing in and out of the midfield for an impressive 18 matches.

It’s been a privilege @AFL @AFLQ & @GoldCoastSUNS! Thanks for the opportunity to experience your great game. I hope I have done you proud.

Furthermore, his increased fitness and work rate were applauded by opposition coaches and fans alike.

After Hunt was voted Gold Coast’s best afield in the Suns’ Round 5 clash, North Melbourne coach Brad Scott declared, on the basis of that performance alone, Hunt was a “bona-fide AFL midfielder”. He also said Hunt’s critics had been made to eat a large serving of humble pie and should apologise.

Then, of course, there was his famous performance against Richmond in Round 16 at Cazaly’s Stadium in Cairns. Hunt fulfilled the dream of every kid to have ever played Aussie Rules when he kicked the winning goal after the siren to give the Suns a sensational victory. It was straight out of a fairytale and a just reward for all his hard-work and dedication to transform himself into an AFL player.

Hunt was both modest and honest when he announced he would not be renewing his contact with the Suns yesterday.

“But the experience of playing AFL and doing something foreign to what I was doing was too much not to choose.”

It brings the issue back to a previously unconsidered point. No, Karmichael Hunt was never anything more than a modestly good AFL player. However, he left a sport in which he was dominant, all too aware of the criticism and jeering he would receive, to challenge himself. If we are to congratulate him on anything, it is having the courage to push the envelop.

Callum O’Connor is a first-year Bachelor of Journalism (sport) student at La Trobe University. You can follow him on Twitter:@C14OConnor