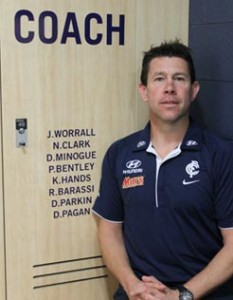 Carlton’s true coaching intentions were revealed this morning after club president Stephen Kernahan paused in a telling five seconds of pure silence. Asked if Brett Ratten would still be coaching if Mick Malthouse had never stated his ambition to coach again, neither he, nor CEO Greg Swann, could deny it.

Stephen Kernahan described the ‘blood on his hands’ to the media frenzy at Princes Park, after telling long-time friend, premiership teammate and Carlton coach Brett Ratten that he would not be coaching the Blues in 2013.

Kernahan was adamant that this was not a knee-jerk reaction, and that speculation over the head coaching position had been under review since the middle of the season.

However he subscribed to the idea that Carlton was driven by success, and personal relationships could not affect the running of the club.

‘I think the club has been impatient for 120 years,’ he said of Carlton’s desire to compete in the highest echelon of the AFL.

‘Carlton is ruthless in its quest for success,’ he said. ‘No contract is guaranteed at Carlton.’

From the dark and uncertain period at the Carlton Football Club, Ratten stood tall, making a graceful exit from Princes Park.

He maintained dignity and class as questions of betrayal, honesty and Mick Malthouse came to the fore. Just as he had been as a three-time Best and Fairest-winning player, Ratten was brave walking into the firing line.

He delivered a departing speech depicting his deep passion for the football club, giving a reflection worthy of the 25 years he spent within the walls of Princes Park.

‘I love the club and losing my job saddens me,’ Ratten confessed. ‘Maybe I was too passionate about Carlton, (if I had to change anything) maybe I should have redirected my energy.

‘But my journey as a coach will continue. The passion and drive is always there.’

Perhaps a sense of disconnectedness being away from Carlton could serve Ratten in good stead at another club, with Port Adelaide rumoured to be circling for the axed Blues coach.

‘I’d be open to sit down and take a look at a lot of things. I will have a chat to a few clubs.’

Ratten also put his dismissal as Carlton coach into perspective with other matters inside the club.

‘You look at Sam Rowe, he’s just a kid battling cancer, or Sophia Saly and then I look at my own life, I’m doing okay.’

It was announced that Ratten would coach the final game of the season against St Kilda on Sunday.

‘Coaching the last game is a personal thing. Why hide? Why run away? You have to confront the hard situations. I started this year and I want to finish this year. I don’t need to hide from that.’

Carlton president Stephen Kernahan lamented injuries and poor player performances throughout the season, which only added to the downfall of Ratten.

‘I’ve spoken to a number of the senior players (after the loss to the Gold Coast on Saturday night). I said harsh things.

‘But at the moment, my thoughts are strictly with Brett and his family. It’s been a tough day, a tough time. It rips my heart out.’

‘It’s incredible how positive he’s been. He’s acted with dignity and resilience. It’s an absolute credit to him,’ he remarked about Ratten’s tenure, having brought the club from 15th in 2007 to fifth last year.

Questions then turned to the vacant position that Ratten’s departure had opened up.

Kernahan was firm: ‘We will not be approaching anyone until the end of the season…[But] we will be speaking to people like Mick Malthouse.’

He added: ‘I think we should also be speaking to Paul Roos. Our list is at a time when we need to strike. That’s why we’re after an experienced coach.’

Yet Ratten wasn’t interested in speculation regarding the next coach of the Blues.

‘I don’t really care who coaches next year, it’s not me.’

When the dust settles, Ratten may move on to new horizons, however in the immediate future he plans to just focus on his family and getting some alone time.

‘For now I think I’ll just go fishing. I haven’t done that for five years,’ an optimistic Ratten remarked before leaving the press conference to conduct his final training session as Carlton coach.

Riley Beveridge and Matt Walsh are first-year Bachelor of Sports Journalism students at La Trobe University. You can follow them on Twitter: @RileyBev and @MattWalshMedia

This piece was also published on From The Sideline.