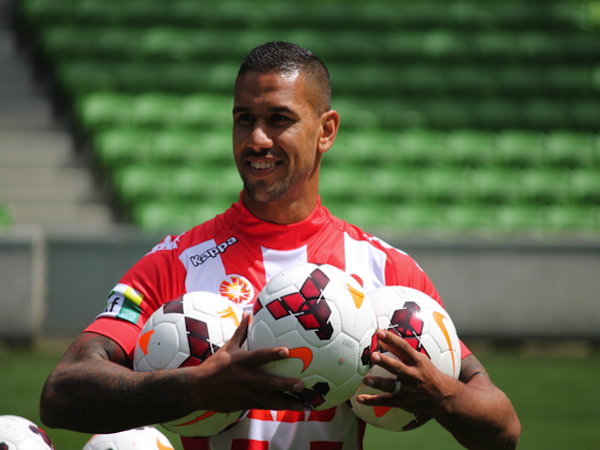 With the A-League’s long pre-season done and dusted, football fans around the country will have their eyes glued to the opening round of Australia’s premier domestic competition.

But just how will the ladder take shape?

In the first of two A-League previews, Daniel Baricevic considers the teams he thinks will occupy the bottom half of the table…

One to watch: Carlos Hernandez

After spending last season in India with Prayag United, the 2010 Johnny Warren medallist returns to the A-League with the Phoenix where he will link up with former Melbourne Victory mentor Ernie Merrick. The Costa Rican will play a pivotal role in the centre of midfield, but there are still doubts over whether he is physically capable of playing a full ninety minutes. However, what he lacks physically he makes up for technically. Hernandez lit-up the competition during his time with the Victory, with his incredible long range strikes and incisive killer balls in the final third. Phoenix fans will be hoping for much of the same.

The signing of ex-Victory coach Ernie Merrick hasn’t done much to allay the concerns of the Phoenix faithful, and it’s hard to blame them after club owners promised an attractive, possession-based brand of football. Despite winning two championships at the Victory, Merrick was much maligned due to his tendency to play an outdated style to which the A-League has moved on from both physically and tactically since his sacking at the beginning of 2011.

In terms of the Phoenix squad, the additions of Hernandez and countrymen Kenny Cunningham have no doubt bolstered the club’s attacking options, but the defence is still light on both quality and depth. If Merrick persists with the likes Leo Bertos at right back and Ben Sigmund in the heart of defence, expect them to concede heavily.

It’s going to be another long year for the A-League’s New Zealand representatives. A lack of quality – particularly at the back – means the Phoenix will end the season rooted to the foot of the table.

One to watch: Craig Goodwin

The 21-year-old has enjoyed an incredible rise to prominence over the past two years, going from semi-professional football in the Victorian Premier League with the Oakleigh Cannons, to both the A-League and two Socceroos caps. Goodwin’s pace and willingness to take on defenders makes him not only a key player for the Jets, but an outside chance for the troublesome left back spot for the national team heading into Brazil 2014.

Inconsistency dogged Newcastle’s campaign last season, and it’s difficult to see it turning it completely around this term. It seemed at times that the signing of Emile Heskey disadvantaged the Jets as coach Gary van Egmond over relied on the former England striker and therefore became very predictable.

Whilst there is no doubt the Jets have some of the best young talent in the country in Josh Brillante, Adam Taggart and Craig Goodwin, their inexperience at times has proved costly.

The signing of Nathan Burns on loan from South Korean club Incheon United means van Egmond may have to tinker his formation and play the 25-year-old in the second striker role next to Heskey, and it could prove fruitful.

But if Newcastle’s over reliance on Heskey continues, a finals spot will be totally out of the reach.

One to watch: Steven McGarry

The veteran midfielder has had an outstanding pre-season and has been one of Perth’s key players since joining from Scottish club Motherwell in 2010. With the loss of Liam Miller to Brisbane, McGarry will have to act as a calming influence on the likes of 16-year-old sensation Daniel de Silva who will most likely get his chance in the Glory midfield this season.

Former Young Socceroos coach Alistair Edwards has a squad full to the brim of young talent, but the experienced core of Danny Vukovic, Jacob Burns, Shane Smeltz and Steven McGarry will determine whether the Glory will play finals.

The likes of Chris Harold, Ryan and Cameron Edwards, Adrian Zahra, Jamie Maclaren, Josh Risdon and Daniel de Silva are all precocious talents, however the guidance of the experienced spine of the club for the youngsters will be vital.

It remains to be seen whether a full season of professional football will be too much for some of the young brigade, and if it is, Glory’s depth will be sorely tested.

If the majority of the squad can stay injury free, then Perth has an outside chance of making the finals as it has the quality to do so. But as ever in the A-League, it will be tight and it may just miss out, but not by much.

One to watch: Aziz Behich

The 22-year-old returns to Heart on-loan from Turkish club Bursaspor, where he was unable to crack the starting eleven in a team that finished fourth in one of Europe’s strongest competitions outside of the ‘big four’. Behich was superb prior to his departure to the Turkish SuperLig and his pace and directness will add another dimension to the team. His linkup play with Harry Kewell on the left will be vital to Heart’s chances of success this season.

John Aloisi has put together a squad that is more than capable of challenging for finals, but the loss of marquee signing Orlando Engelaar until the new year with a broken leg will hurt Heart’s chances massively.

If Melbourne Heart is to make finals, its away record must improve and it has to start hitting the back of the net on a more regular basis. Whether or not it improves its away form is something to be seen, but the signings of Iain Ramsey, Harry Kewell and Maltese international Michael Mifsud should result in an improvement in the ‘goals for’ column of the table. The return of Mate Dugandzic from long-term injury is almost a new signing for Heart, but they still lack a quality out and out striker. Dylan Macallister only managed one goal in 652 minutes of football last season, and if he doesn’t show any improvement early in the season, expect Mifsud or Kewell to start up top.

The last finals spot is always hotly contested, but it’s difficult to see Heart’s goalscoring record improving dramatically. The red and white half of Melbourne is in a similar position to Perth – the quality is there, but if improvements aren’t made then finals will be just out of reach.

One to watch: Marcelo Carrusca

Along with Dario Vidosic, the 30-year-old Argentine was the key creative force behind the Reds’ run to the finals last season. As the Catalan revolution takes hold in South Australia, expect Carrusca to thrive even more as he will no doubt be given licence to float in between the midfield and strikers down the left hand side and cause damage to opposition defences.

New coach Josep Gombau is aiming to implement a modern possession-based ‘Barca-esque’ style of football at Adelaide United, and whilst the Catalan has asked for patience as the players adapt to a new way of playing, they have looked sharp in the pre-season.

The loss of Dario Vidosic is a huge one, but the club has done well to replace him with Steven Lustica who shares similar attributes to the Socceroo. The new Spanish duo of Isaias Sanchez and Sergio Cirio will no doubt fit seamlessly into the system and will help the others around them. Adelaide’s biggest signing of the off-season no doubt is the capture of Michael Zullo on loan from FC Utrecht. A lack of game time in the Eredivisie sees the left sided 25-year-old return to the A-League to showcase his talents to Socceroo boss Holger Osieck in time for the World Cup next year.

Finals football beckons for United. It has the quality in the squad to potentially finish higher on the table, but there may still be some teething problems in terms of the new style of play.

This story first appeared on BackPageLead